Innovations in laser physics win the 2018 Nobel Prize in Physics

The Royal Swedish Academy of Sciences has awarded the 2018 Nobel Prize in Physics to Arthur Ashkin, Donna Strickland, and Gérard Mourou for “groundbreaking inventions in the field of laser physics.” Ashkin will receive half of the roughly $1 million prize, and Strickland and Mourou will split the other half.

The award recognizes techniques that enable basic science, says Roger Falcone, a physicist at the University of California, Berkeley, and president of the American Physical Society. “There’s a close interplay between invention and scientific discovery,” he says.   Ashkin, who works from his home laboratory, invented optical tweezers while working at Bell Laboratories in the 1970s and 1980s. These instruments use focused laser light to hold and move particles as small as individual atoms.

Credit: Adapted from Science
In 2016, researchers used optical tweezers to grab onto polystyrene beads attached to the two ends of a DNA hairpin (Science 2016, DOI: 10.1126/science.aad0637). By pulling the beads apart, they could watch the DNA unfold and fold in real time.

He realized that laser light imparts a tiny but meaningful amount of force on microscopic objects, enough to hold them in the center of the light beam. The Nobel committee demonstrated an analogy of this effect this morning with a video of a person holding a ping-pong ball suspended in a hair dryer’s air stream.

Optical tweezers have found applications across the sciences, says Pak Hyuk Kyu, a physicist at the Institute for Basic Science in Korea. “Right now it’s being used in many different fields,” he says, listing physics, chemistry, and biology. Kyu uses optical tweezers to manipulate colloidal particles inside nanoengines.

In 1987, Ashkin and Joseph M. Dziedzic showed optical tweezers could trap individual bacteria and viruses (Science 1987, DOI: 10.1126/science.3547653). Other researchers would use his invention to understand the motion of kinesin, a protein that transports cellular cargo by walking on filaments inside cells. Optical tweezers provided the foundation for the 1997 Nobel Prize in Physics, awarded for trapping atoms. More recently, researchers at Harvard University built a single molecule from a sodium and a cesium atom.

Strickland, of the University of Waterloo in Ontario, and Mourou, of Ecole Polytechnique and the University of Michigan, Ann Arbor, developed the chirped pulse amplification (CPA) technique for creating ultrashort, high-intensity pulses of laser light. The work was done in the 1980s at the University of Rochester when Strickland was a graduate student in Mourou’s lab. Strickland is just the third woman to win a physics Nobel.

Strickland and Mourou were among several groups working to create ultrashort laser pulses by compressing and amplifying light. Strickland explained at a press conference that their key insight was to first stretch a short pulse of light into a longer one, lowering its intensity so it can be safely amplified to a higher energy. Once amplified, the light gets compressed into an ultrashort pulse.

The high intensity pulses created by CPA are used in laser eye surgery and for machining glass, metal, and other surfaces. In laser eye surgery, doctors use these pulses to cut open the top layer of the cornea and remove tissue underneath. This reshaping of the cornea moves the eye’s focal point and can correct near-sightedness.

Beyond those applications, CPA has enabled new laser-based projects like those at the Extreme Light Infrastructure, a group of high-energy physics research facilities in Europe. Strickland and Mourou’s breakthrough set the stage “so more fundamental physics can be studied” like observing electron decay and other processes inside atoms, says Gregory Quarles, chief scientist at the Optical Society.   For chemists, CPA has yielded lasers used to study molecular systems on the femtosecond timescale. Ahmed H. Zewail won the 1999 Nobel Prize in Chemistry for using ultrashort laser pulses to observe molecules moving during chemical reactions.   Stewart Wills, senior editor of Optics & Photonics News, says this year's physics prize and last year's Nobel recognizing the Laser Interferometer Gravitational-Wave Observatory demonstrate how much scientists can do with lasers. "When [laser technology] first arrived people joked about it as a solution looking for problem. People have found amazing ways to apply lasers to any number of problems." 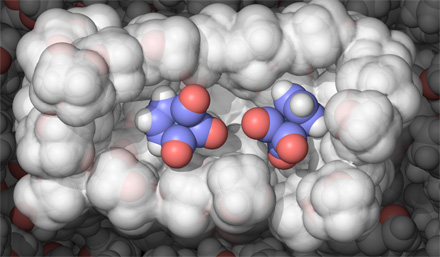 Analytical Chemistry
Molecular Dynamics In Real Time
Share X
To send an e-mail to multiple recipients, separate e-mail addresses with a comma, semicolon, or both.
Title: Innovations in laser physics win the 2018 Nobel Prize in Physics
Author: Sam Lemonick
Chemical & Engineering News will not share your email address with any other person or company.