WHEN THE federal Corporate Average Fuel Economy (CAFE) standards were updated in 2012 to establish minimum fuel efficiency standards for future vehicles, automakers reacted with anxiety. “There was a lot of discussion about how in the world we were going to do this,” recalls Don Hillebrand, director of the Energy Systems Division at Argonne National Laboratory. “People asked, ‘Is this even possible?’”

Big, heavy engines and large fuel tanks were once the industry’s means of delivering the power and performance that consumers desired. Heavier vehicles required sealants, additives, and stiffeners that made the car safer, quieter, and more fun to drive. Automakers could not sacrifice these necessities, nor could they eliminate all the heavy gadgets that drivers had come to expect in their vehicles, such as electronically adjusted seats, entertainment systems, and high-tech control panels. Meeting fuel economy standards and stricter emissions allowances meant vehicles would have to get lighter, and automakers would have to seek out new materials that support smaller engines and reduce vehicle weight.

Research into the combustion process in vehicle engines delivered a breakthrough. Through programs supported by the Department of Energy over the past five years, engineers conducted advanced computational analysis of engine designs. These models helped researchers better understand how emissions form within engine cylinders. They also gained insight into how fuel type, fuel injection, and airflow in the cylinders affect combustion and emissions. Informed by these insights, the scientists designed smaller engines that reduced weight while outperforming their predecessors by operating at higher temperatures and pressures. 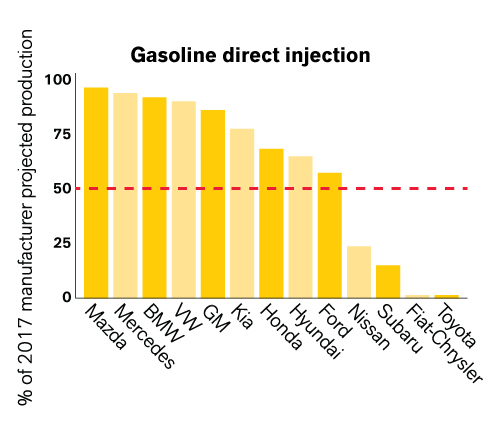 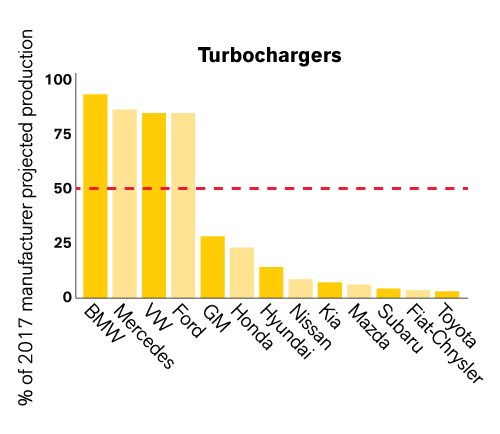 Automakers are using a variety of strategies to meet emissions and fuel economy goals, including gasoline direct injection (GDI) and turbochargers, which are often used with GDI. Adapted from the 2017 “The Light-Duty Automotive Technology, Carbon Dioxide Emissions, and Fuel Economy Trends Report” from the U.S. Environmental Protection Agency.

“We are in the middle of a phase where we are going to small, high-efficiency engines—really lightweight engines,” Hillebrand says. With a smaller engine, manufacturers could be less concerned with eliminating the vehicle features consumers love.

However, lubricating smaller engines presents new challenges. To keep pace with engines that run at higher temperatures, the lubricant industry had to reconsider engine oils and transmission fluids.

“Reducing the friction in engines through improved lubricants is a cost-effective approach to increasing fuel economy,” says Michael Berube, director of the Vehicle Technology Office at the Department of Energy’s Office of Energy Efficiency and Renewable Energy. He explains that the extreme operating conditions of modern engines hinder lubricant effectiveness, and it is important to understand the function of lubricant additives. Exposure to heat, high pressure, and metal cause the lubricant to oxidize. It breaks down and forms a cascade of free radicals.

“Antioxidants keep oil in good condition for extended periods of time, so there will be less wear on the parts and fewer deposits building up inside the engine,” says Cyril Migdal, head of global application technology for the Lubricant Additives business at Lanxess. In addition, friction modifiers boost fuel efficiency, adding to the engine’s environmental sustainability. Lanxess has developed both organic and molybdenum-based friction modifiers that can boost fuel economy by up to 5% when added to a lubricant formulation.

The smaller engine has also ignited innovations in vehicle structure. According to a 2015 Department of Energy study, a 10% weight reduction will improve a vehicle’s fuel economy by up to 8%. Advances in materials have the potential to reduce vehicle weight by as much as 60%, the study shows. Carrying a smaller engine—270 kg instead of 900—challenges the industry to reduce weight in other vehicle components, Hillebrand says.

Jose Chirino, technical director for the High Performance Materials business unit at Lanxess, believes his company offers a solution. “We have been active in the automotive industry for many years, implementing glass-filled, nylon-based polymers to replace metal in structural components,” Chirino says.

For example, Lanxess has developed a high-temperature-stabilized polyamide that can withstand temperatures up to 230 °C. When combined with 35% of glass fibers, the product is ideal for making parts that need to withstand high temperatures, such as intake manifolds.

A U.S. Environmental Protection Agency report on carbon dioxide emissions and fuel economy published in 2017 stated that innovations in the auto industry have led to a 22% increase in fuel economy.

Lanxess continues to seek cost-effective, production-friendly uses for its polyamide products. “We are now working on polyamide grades with a blend of glass and carbon fiber that is cheaper and easier for parts manufacturers to use, over the typical carbon fiber thermoset composites,” Chirino says.

Despite the apprehension over meeting stricter emissions requirements, a U.S. Environmental Protection Agency report on carbon dioxide emissions and fuel economy published in 2017 stated that innovations in the auto industry have led to a 22% increase in fuel economy since 2004, with the sharpest improvement occurring since the implementation of federal fuel-economy standards. Advances in new structural materials and additives to support the function of new engines have paid off by creating high-performing, lightweight vehicles. These technological innovations will continue to focus the auto industry on an environmentally sustainable future.