But one of the key hurdles to the adoption of electric cars is the performance of the lithium-ion batteries used to power them. “Car owners want batteries that can go long distances on a single charge, can charge quickly, have long lives, are efficient, are not too costly, and are safe,” says Gao Liu, a group leader in the Energy Storage & Distributed Resources Division at Lawrence Berkeley National Laboratory.

"We'd like to cut the typical charge time to 15 minutes," Liu says, "and get a lot more energy per pound [of battery]."

To meet these challenges, lithium-ion battery makers have explored new anode and cathode materials and even modified the electrolytes that transfer charge between them. But some of the most promising improvements are coming from an oft-overlooked place: the binders that hold these lithium-ion battery components together. New binders are poised to improve the lifetime and capacity of lithium-ion batteries.

As noted, rapid charging is high on customers’ wish lists. It takes about five minutes to fill a regular car with gas, but it can take hours to recharge an electric car or hybrid, depending on the type of charger used. Commercial electric-car charging stations cost about $100,000 and can provide a charge in about half an hour. The more typical home units cost a lot less but can take up to seven hours to charge the car. “We’d like to cut the typical charge time to 15 minutes,” Liu says, “and get a lot more energy per pound of battery.”

Charging stations are still relatively rare, although they are becoming more prevalent. There are approximately 55,000 places electric cars can be charged in the U.S., compared to some 150,000 gas stations. Until charging stations are as common as gas stations, increasing charge capacity will continue to be a key goal in the race to develop better lithium battery technology. The more energy a battery can store, the more miles an electric vehicle can travel between charges. This distance between charges is called driving range.

“The battery industry is now focused on helping consumers avoid what’s known as ‘range anxiety,’ ” says Robert Gibbison, director of marketing and product management at specialty chemical company Ashland. “That’s a fear of not having enough charge to get home or to the next charging station without running out of power. Customers want to be sure they can get from point A to point B on a single charge.” 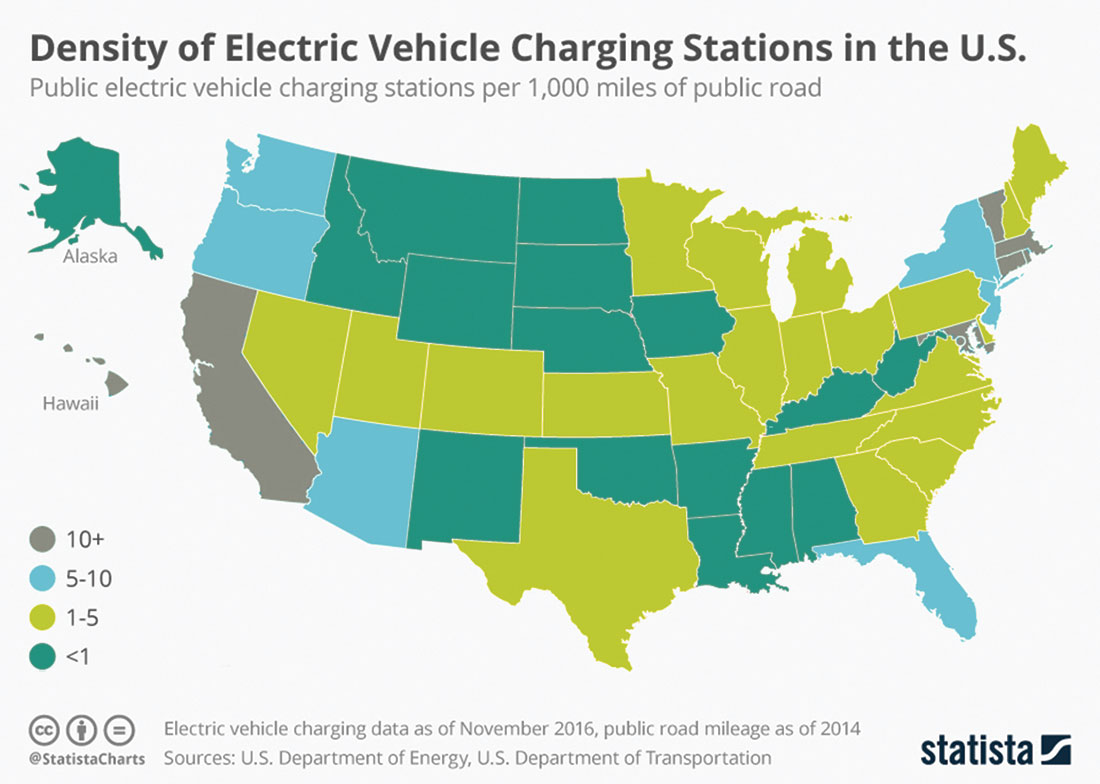 Right now, energy capacity, and the driving range associated with it, is largely limited by the size, weight, and efficiency of the battery, and those factors are governed by cost. A $75,000 Tesla can go more than 250 miles on a single charge, but most pure-electric vehicles priced around $30,000 (the average selling price for most mass-produced electric vehicles) are limited to fewer than 100 miles per charge. Most carmakers are aiming to boost that figure to at least 200 miles per charge. With a hybrid, consumers can always rely on gasoline if necessary, but the pure-electric-vehicle range is, obviously, tied to the battery.

An In-Depth Look at
Soteras Binders

The Soteras MSi binder is a two-component system that is typically added at a 95:5 ratio. The binder relies on cross-linking to control swelling of silicon, which promotes superior cycle performance at capacities greater than 400 mAh/g when used with silicon oxide, silicon composite, or silicon-graphene technologies. The Soteras MSi binder offers good electrochemical stability and allows manufacturers to produce batteries with a greater capacity than what conventional binders allow. It also has good slurry properties, which facilitate smooth-coated surfaces on the current collector and help prevent battery failure. It is also water based, which follows an industry trend, because that reduces health risks, cost, and processing.

In testing on a silicon oxide carbon anode at 420 mAh/g, the Soteras MSi binder retained more than 90% of its charge after 100 cycles. In contrast, a conventional binder made of carboxymethyl cellulose and styrene butadiene retained less than 70% of its charge after the same number of cycles. The Soteras MSi binder also outperformed this conventional binder at high charge rates.

The Soteras CCS binder addresses heat shrinkage of the battery’s separator. The binders are electrolyte insoluble and work with single- and multilayer ceramic-coated separators. The two-component coating system is compatible with typical coating processes and provides good lithium-ion permeability even as it minimizes negative effects on cell electrochemistry.

One new approach to improve battery charge capacity is to move from graphite-based anodes to ones made with silicon. Silicon packs a higher density of energy per unit of material, according to Donghai Wang, associate professor of mechanical engineering at Pennsylvania State University. “Silicon can store 10 times the charge graphite can,” says Wang, “so it offers a great charge for performance in lithium-ion batteries.” Liu says most battery makers are mixing silicon with graphite, but they’d like to replace the graphite entirely.

The shift hasn’t been easy, and it has taken years of research to achieve. “Across industry and academia, people have been struggling to make the switch to silicon,” says Alan Goliaszewski, research director of energy and specialties at Ashland. That’s largely because silicon particles in the anode change size during discharge and charge, lowering battery capacities over time.

“One solution is to use different binders,” says Wang. Binders hold the active ingredients in batteries together and put them in contact with the foils that make it possible for the batteries to deliver electricity. Many experts see binders that stabilize these silicon particles as key to developing batteries that better satisfy customers’ needs in a variety of ways—not just by being longer lasting but also by having thermostability and greater capacity.

Ashland’s new Soteras™ MSi binder, for example, supports incorporation of silicon in place of some or all of the graphite in silicon-based anodes. Used appropriately, it can increase battery capacity by up to 30%, Goliaszewski says.

The firm’s Soteras™ CCS binder, meanwhile, allows battery manufacturers to address another important problem: heat shrinkage of the battery’s separator, a problem that can seriously reduce battery life span and impact safety. The binder allows battery makers to incorporate ceramic-coated polyethylene and polypropylene separators, which deliver better performance. “If you coat [the separator] with ceramic particles, even if you get a substantial temperature increase, the ceramic stays intact, and that keeps the anode and cathode from touching each other,” Wang explains. The technology works even up to temperatures as high as 140 °C.

"Ashland's new binders can help manufacturers improve the efficacy of their materials to make longer lasting batteries without changing other aspects of their production process."

—Alan Goliaszewski, research director of energy and specialties at Ashland.

Importantly, these new binders are near “drop-in” solutions, Goliaszewski says. “They can help manufacturers improve the efficacy of their materials to make longer-lasting batteries without having to change other aspects of their production process.”

Despite this progress, there’s much room for improvement of lithium batteries for electric cars, including shortening charge rates. “In a car battery, you are storing a lot more energy than in a cell phone or laptop,” Goliaszewski says. Putting all that energy back into a discharged battery takes time—and that doesn’t sit well with consumers. So manufacturers are looking, in particular, to increase the speed at which batteries recharge. But high charge rates come at a price, Gibbison explains. “Typically, the faster you charge, the less total charge you get.”

New binders will clearly be one significant part of the solution to making better and more efficient lithium batteries for cars.

“We’re looking forward to seeing how our customers, who formulate these lithium batteries, use these new technologies,” Gibbison says. “The data suggest that these new binders are a step-change technology that can improve the usability of lithium-ion batteries and potentially allow manufacturers to command a higher selling price. That can directly impact their profitability.”

Sponsored content is not written by and does not necessarily reflect the views of C&EN’s editorial staff. It is authored by writers approved by the C&EN BrandLab and held to editorial standards expected in C&EN magazine stories, with the intent of providing valuable information to C&EN readers. This sponsored content feature has been produced with funding support from Ashland.