B y some estimates, the number of potential drug-like compounds exceeds 1060 small molecules. But medicinal chemists often don’t know which of this bounty of compounds will lead to a successful treatment for a given disease.

Given the enormous chemical space for small-molecule drugs, the number of possible interactions between a potential drug and a target macromolecule is “essentially infinite,” says John M. Newsam, an adjunct professor of chemistry at the University of California San Diego and CEO of Tioga Research. To accelerate the drug discovery process, companies now regularly incorporate in silico screening methods to complement wet lab testing. Computational tools help prioritize hits and winnow the list of compounds for screening in a wet lab against a particular target macromolecule, Newsam says.

Mathematical representations of interactions between small molecules and target biomolecules can be useful tools to predict winners. Until recently, though, the computing power needed for detailed calculations made the approach impractical. As it has in other industries, cloud computing offers an opportunity to scale up computational approaches to drug discovery.

Underscoring the potential power of cloud-based computing for drug discovery, the COVID-19 pandemic inspired an effort by an alliance of major pharmaceutical companies, including Takeda, Novartis, and Gilead, to identify novel antiviral molecules. In June 2020, the chemical modeling and simulations company Schrödinger announced that it was contributing computational design work to the alliance, tapping Google Cloud’s capacity to perform virtual screening against protein targets.

Some computational tools incorporate artificial intelligence algorithms, which effectively teach the tools to make predictions based on practice with training sets of data. They don’t directly take into account physical interactions between molecules. But the most-adopted computational approaches are based on molecular mechanics, modeling each atom as a particle and each bond as a spring.

According to Newsam, a drawback to molecular mechanics–based approaches is that they historically have relied on simplified methodology for calculating the strength of interactions between a protein and a small molecule. The simplification is to use a model system that doesn’t account for solvation or entropy. But these complicating factors can be accounted for in a different approach by calculating free energy perturbations (FEP). FEP is a statistical mechanical method for determining the free energy difference of molecules going from an unbound to a bound state. 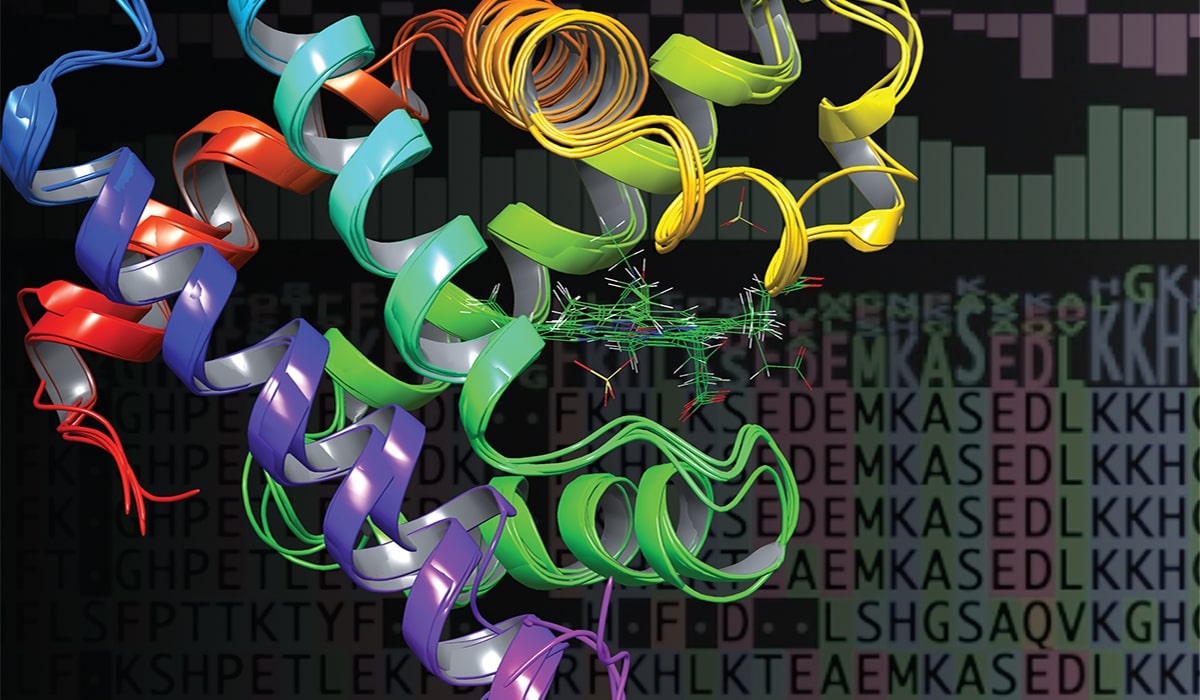 This illustration shows how computer modeling can be used to predict interactions between different ligands and a target biomolecule, providing insights that could help scientists improve binding.
Credit: Schrödinger

In drug discovery, using FEP typically means calculating the free energy of a solvated ligand and protein target before and after they bind together, which can help improve binding affinity predictions. In a 2017 paper, researchers from Roche and Schrödinger used the latter’s platform to calculate FEPs of novel ligands for a binding pocket on the protein cathepsin L. FEP worked better than two more-established computational methods, as well as a model-free approach (in which a medicinal chemist selected building blocks taking into account only known structure-activity relationships), and yielded eight compounds with improved affinity over a reference compound compared with only one with each of the other methods.

Schrödinger has an internal drug discovery pipeline, collaborates with partner pharmaceutical companies, and supplies the software platform to organizations that want to use its FEP-based computational tools. However, with all its projects, scale can be an issue. FEP calculations require a large amount of computational power, and “it takes between 2,000 and 5,000 molecules to get to a candidate,” says Wayne Tang, Schrödinger’s executive director of medicinal chemistry. And according to Robert Abel, its executive vice president of science, FEPs can demand nearly a full day of calculations per molecule per graphics processing unit (GPU), an image-rendering processor.

Schrödinger has its own capacity for performing calculations for ligands in parallel using servers with multiple GPUs, but Chief Technology Officer Pat Lorton notes that many GPUs are required over the course of a drug discovery project. In March 2020, Schrödinger partnered with Google Cloud to expand its platform’s capacity.

The sky is the limit

Cloud-based computing represents a potential order-of-magnitude acceleration for drug discovery. It allows for a much larger scale of parallel computing, which can boost the number of simultaneous FEP calculations made for potential drug molecules. The failure rate for a drug discovery project generating a candidate that reaches clinical trials is notoriously high, but Abel says an analysis copublished with Schrödinger and GlaxoSmithKline showed that predictive affinity scoring via large-scale deployment of computational algorithms could double the success rate of drug candidates advancing into the clinic. Its deal enables Schrödinger to use thousands of Google Cloud’s GPUs, which is crucial for accelerating its own drug discovery projects and those of its partners and for improving the probability of success.

To help quickly find therapeutics and vaccines for the fight against SARS-CoV-2, Google Cloud has donated 16 million hours of GPU time to empower Schrödinger to accelerate the discovery process. “We saw a dramatic acceleration in terms of how fast we could get good hits and move on,” Lorton says.