Credit: Courtesy of Yann Molard
A photocatalyst system with molybdenum clusters (red and yellow shapes) anchored to graphene (gray) via pyrene (green and blue) takes in sunlight (purple) and produces excited electrons that are sent back to a cluster to split hydrogen from water.

By anchoring molybdenum clusters onto a sheet of graphene, researchers have created a material that photocatalyzes the splitting of water into hydrogen and oxygen, pointing the way toward new ways to produce hydrogen fuel (Inorg. Chem. 2019, DOI: 10.1021/acs.inorgchem.9b02529).

Water is a plentiful raw material that could supply hydrogen fuel carbon-free if the conversion from one to the other could be done efficiently and cheaply. The right photocatalyst would absorb sunlight, excite electrons in the material to a higher energy state, and then transfer those electrons to the surface of the catalyst, where the water-splitting reaction takes place.

Transition-metal clusters do an excellent job of emitting light, which suggests they have the right electronic properties for catalysis. And graphene can easily deliver excited electrons back to the metal clusters. Previous work, though, had shown that covalent grafting of metal clusters onto sheets of graphene oxide creates defects in the graphene, changing its electrical conductivity and undermining the clusters’ ability to perform catalytic reactions.

Instead of attaching the clusters with a covalent bond, Yann Molard of the University of Rennes, Marta Feliz of the Institute of Chemical Technology at the Polytechnic University of Valencia, and their colleagues created an organic linker molecule with an imidazolium head and either a long alkyl chain or a pyrene group. They used the linker to connect the negatively charged molybdenum cluster—which Molard describes as in-between a molecule and a nanoparticle—to graphene through adsorption. Synthesizing the linker and attaching the pieces were straightforward, he says. “You don’t touch the structure of the graphene, you don’t touch the structure of the cluster—you just make them interact together with your linker.”

In such a setup, sunlight absorbed by both the metal clusters and the pyrene generates electrons that move into the graphene, which then transmits them to one molybdenum cluster. The electrons that reach the surface of the molybdenum in their excited state can then drive photocatalysis in water, splitting it into hydrogen and oxygen.

The molybdenum-pyrene-graphene combination produced significantly more H2 than either the metal clusters or the graphene alone. But production was much lower—in some cases by two orders of magnitude—than in other experimental material systems. This experiment was a proof of concept, Molard says, and those other systems either contain toxic materials such as cadmium sulfide or expensive co-catalysts such as platinum, rendering them impractical.

Burkhard König, a chemist at the University of Regensburg, says the paper’s detailed analysis of the interaction between graphene and the other materials provides a better understanding of the synergistic properties of the materials. He doubts, however, that the molybdenum-graphene setup will provide practical amounts of solar-generated hydrogen.

There’s plenty that can be done to try and improve production, Molard says. He’s interested in testing different metal clusters, such as tungsten. Also, modifying the cluster, which degrades over time in water, could improve its stability, he adds. “We have plenty of things to try.”

The research has broader implications, too, he says: in principle, any negatively charged entity could be attached to graphene using the noncovalent anchoring technique to create materials for many applications such as photovoltaics, lighting, and displays. “This is endless,” Molard says. 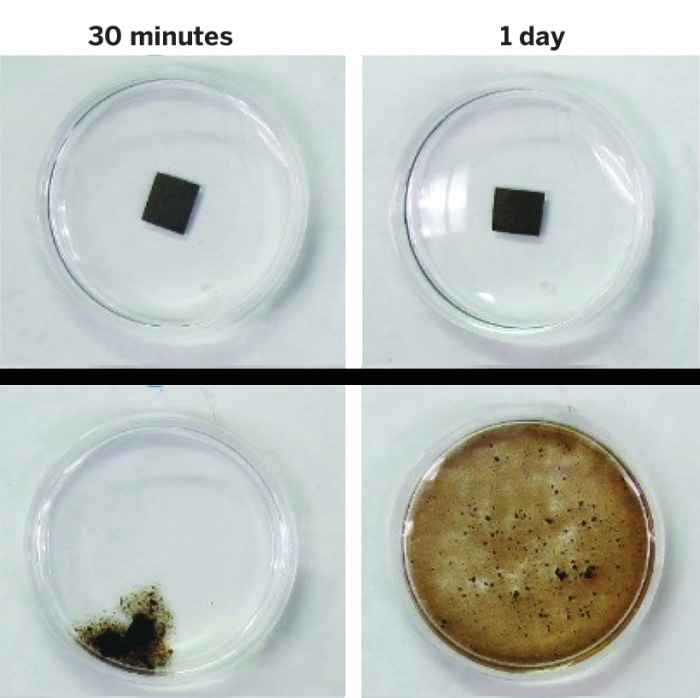 Materials
Researchers Peel And Stick Nanostructures To Various Materials
Share X
To send an e-mail to multiple recipients, separate e-mail addresses with a comma, semicolon, or both.
Title: Graphene decorated with molybdenum clusters splits water
Author: Neil Savage, special to C&EN
Chemical & Engineering News will not share your email address with any other person or company.

Comments
pvk (December 1, 2019 9:23 AM)
Sorry, this is not water splitting. Water splitting involves generation of H2 and O2. The paper reports H2 generation in the presence of a sacrificial electron donor. The oxidation products of TEA need to be identified to establish complete mechanism. ( Isn't H2 one of the oxidation products of TEA oxidation?) The role of sacrificial donors cannot be ignored. For additional details see https://pubs.acs.org/doi/10.1021/acsenergylett.8b00196
Reply »

pvk (December 1, 2019 11:09 AM)
Sorry, this is not water splitting. Water splitting involves generation of H2 and O2. The paper reports H2 generation in the presence of a sacrificial electron donor. The oxidation products of TEA need to be identified to establish complete mechanism. ( Isn't H2 one of the oxidation products of TEA oxidation?) The role of sacrificial donors cannot be ignored. For additional details see https://pubs.acs.org/doi/10.1021/acsenergylett.8b00196
Reply »