Credit: Shutterstock/Keith Homan
Peanut butter and chocolate: Figuring out the perfect ratio is more than a matter of taste.

Chemists on Twitter had plenty to say recently when process chemist Alex Goldberg asked how one might measure the ratio of peanut butter to chocolate in a Reese’s Peanut Butter Cup so that one could know for certain how the parameter varies for the classic puck, the king size, and the mini.

Their answers revealed many quirky yet quantitative ways that the perfectly complementary peanut butter and chocolate might be distinguished from each other using analytical techniques. The suggestions included using assays to compare relative protein levels in different Reese’s shapes, physically separating the two phases from one another and weighing them, and running a test for the peanut antigens or for the methylxanthines found in cacao. Another suggestion was to use a high-speed centrifuge and a ruler—presumably to spin mashed up cups and then measure the separated phases.

Yet another noted that both peanut butter and chocolate should be visible with good contrast via magnetic resonance imaging (MRI), allowing the volumes of each to be determined and compared after an MRI scan of the cups. Goldberg told Newscripts he appreciated the breadth of approaches put forth by scientists of different stripes.

Twitter users have strong opinions about which Reese’s form contains the divine ratio of key ingredients. Lovers of Reese’s springtime eggs and other seasonal forms are particularly vocal. They can now back up their claim. A statement from a Reese’s brand representative reveals to Newscripts that the seasonal shapes have the highest proportion of peanut butter. With about 6 months to go until Reese’s Peanut Butter Pumpkins show up for Halloween, researchers should have time to get an exact figure.

Credit: Paul L. Krapivsky and Sidney Redner
Best-laid plans: Math weighs in on which strategy is best when it’s time to park.

In another quantitative take on a grand mystery, physicists Sidney Redner of the Santa Fe Institute and Paul L. Krapivsky of Boston University recently published a mathematical analysis of strategies for picking a parking space (arXiv 2019, arXiv: 1904.06612). Readers will no doubt be familiar with the tiny gamble a driver takes when approaching a line of parked cars: Does the driver grab the first available spot or keep going and hope there’s a spot closer to the final destination?

The researchers identified three strategies: taking the spot next to the last car parked in the row when approaching a line of parked cars from the far end (nonjudgmentally dubbed the “meek” strategy by the authors); driving all the way to the closest space, hoping to land it, and if it’s not free, backtracking to the first available spot (the “optimistic” strategy); or taking a middle ground (the “prudent” strategy). In this last strategy, the driver keeps going past the first run of parked cars but then parks in the closest space within the next available gap of cars, wagering such a move is a little better than the meek parking strategy but not pushing one’s luck.

“The meek strategy is the most stupid strategy,” Redner says, because the driver parks far away and leaves the best spots empty. The prudent strategy is generally a good one, the researchers find, but if turnover traffic is high, nobody will ever land prime spots, Redner says. The optimistic strategy is good for nailing that best spot, but the penalty is big if the closest spots are full. From the perspective of keeping the parking lot nicely packed, a mix of strategies appears to be optimal.

Of course there’s more to a parking choice than making the mathematically optimal bet, the authors note. “Psychologically, a prudent driver may get upset by parking far from the target and then discovering that the closest parking spot is available.”

The clever, conscientious readers of Newscripts weigh in
Materials
Getting all touchy feely and being prepared 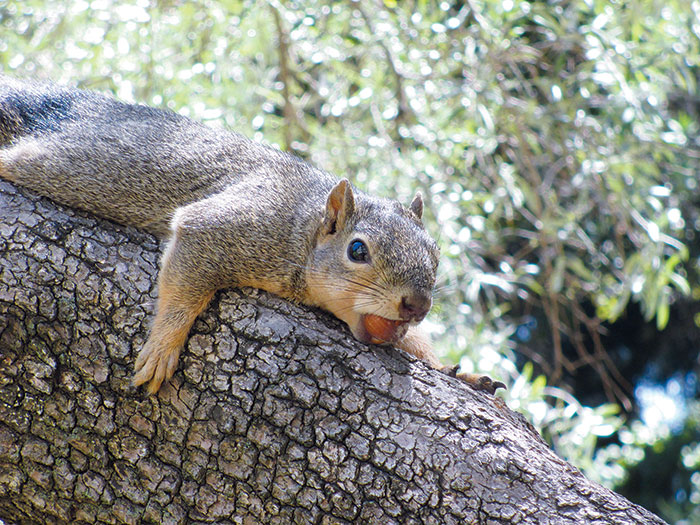 Education
Squirrels stash strategically, and a chemist’s luxuriant locks are up for bid
Share X
To send an e-mail to multiple recipients, separate e-mail addresses with a comma, semicolon, or both.
Title: Peanut butter cups and parking spots, analyzed
Author: Jessica Marshall
Chemical & Engineering News will not share your email address with any other person or company.