Credit: Peng Chen/Cornell University
During a fluorogenic oxidation reaction, fluorescence microscopy can pinpoint a catalyst’s most active sites (left, red and yellow). Adding a competing nonfluorescent reaction to the mix decreases the reaction rate (center) and reveals exactly where on the catalyst a “dark” reaction occurs (right).

A handful of imaging methods developed in recent years have pushed the resolution of optical microscopy down to the nanoscale. Giving scientists the ability to pinpoint the positions of reacting molecules, these techniques have advanced the chemical and physical sciences. But in general, they work only if the molecules of interest fluoresce or can be tagged with a fluorescent label. This severely limits their application.

Researchers at Cornell University now report a way around this problem: by pairing a nonfluorescent target reaction with a fluorescent one. If the two reactions compete with each other, it’s possible to use this interaction to make the nonfluorescent reaction “visible” under a microscope. The team has applied this technique to image active sites on a catalyst.

First, the researchers study the reactions in isolation and then in combination to prove that they compete with each other. They use fluorescence microscopy to measure the rate of the auxiliary reaction and map where on the catalyst surface the fluorescent products form. Then the competing reagent, part of the reaction of interest, is added to the reaction mixture while researchers monitor its effect on the auxiliary reaction. By analyzing the two sets of data, the team is able to deduce, with nanoscale precision, where on the catalyst surface the otherwise invisible reaction occurred (Nat. Chem. 2019, DOI: 10.1038/s41557-019-0288-8).

Cornell’s Xianwen Mao, Peng Chen, and coworkers applied their new method to study the photooxidation of a common aquatic pollutant, hydroquinone, to quinone on catalytic bismuth vanadate (BiVO4) particles. This reaction doesn’t fluoresce. So they paired that reaction with a competing one—photooxidation of Amplex red to resorufin, which broadcasts its formation by fluorescing in the red range.

The researchers controlled the size and morphology of the BiVO4 particles and used the imaging method to identify which crystal facet is the catalytic sweet spot for each reaction. This information can be used to improve catalyst design. For hydroquinone oxidation—the “dark” reaction—the chemistry takes place primarily on crystal surfaces known as the (010) basal facets. Hydroquinone also reacts on the lateral (110) facets but to a much lower extent, and it almost always avoids the corners of those facets.

“This study is quite a game changer,” says Ke Xu of the University of California, Berkeley, a specialist in analyzing nanoscale phenomena. Single-molecule and superresolution microscopy methods have gained much momentum over the past decade, he says. But the fluorescence requirement notably limits what can be analyzed. This new study provides a potential solution to extend these methods to arbitrary surface reactions. Xu adds, “I look forward to seeing what exciting new science this and related approaches will bring about in the near future.” 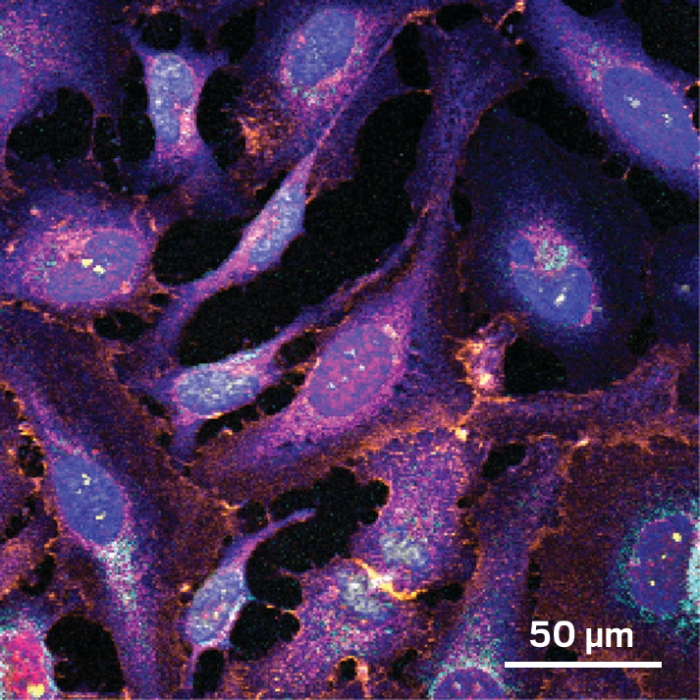 Share X
To send an e-mail to multiple recipients, separate e-mail addresses with a comma, semicolon, or both.
Title: Extending fluorescence microscopy to nonfluorescent reactions
Author: Mitch Jacoby
Chemical & Engineering News will not share your email address with any other person or company.