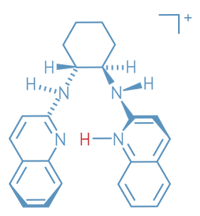 The protonated small molecule shown both accelerates and directs an organic reaction toward enantioenriched products. The molecule was designed and prepared by chemists Benjamin M. Nugent, Ryan A. Yoder, and Jeffrey N. Johnston at Indiana University, Bloomington [J. Am. Chem. Soc., 126, 3418 (2004)]. It proves that it is possible to design a coordination complex that can hold a proton long enough for the complex to perform as a chiral catalyst. To use such a complex in this way "was generally believed unattainable," the researchers write. They tested the proton complex in the so-called aza-Henry reaction, in which a nitroalkyl adds across a carbon-nitrogen double bond. When only the small molecule is added to the reaction, the reaction proceeds as it does without catalyst, that is, slowly and yielding racemic products. But with the protonated small molecule, the reaction proceeds faster, yielding products with enantiomeric excesses of up to 95%. 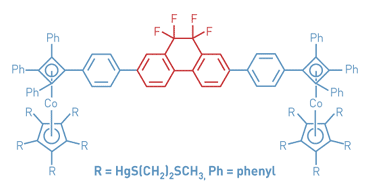 Molecular machinery is still a far-off dream, but many labs are nonetheless pursuing it. At the University of Colorado, Boulder, for example, chemistry professor Josef Michl and coworkers have synthesized molecules (such as the one shown) that contain a rotating moiety (red) and two cyclopentadienyl "feet" with thiomercurial "tentacles" that adsorb to a gold surface so that the rotator axle is held parallel to the surface. The rotator is free to turn, but in practice the team finds that the tentacles sometimes impede its rotation. In the absence of such interference, the dipole of the rotator can be flipped by the electric field of a scanning tunneling microscope tip. Molecular dynamics calculations suggest that an alternating electric field perpendicular to the surface could be used to spin such a molecular rotor in one direction. A movie of this rotary action is viewable by clicking on a link in Michl's paper [J. Am. Chem. Soc., published online March 11, http://dx.doi.org/10.1021/ja039482f]. JACS Editor Peter J. Stang believes that this marks the first time that any chemical journal has had animation directly linked to the body of an article.

Chlorotris(triphenylphosphine)rhodium, known as Wilkinson's catalyst, was the first homogeneous catalyst to allow hydrogenation of alkenes and other unsaturated compounds at room temperature and pressure, and it's one of the most versatile catalysts known. The bromo and iodo analogs are known, but the fluoro analog has never been fully characterized or studied. Now, Vladimir V. Grushin and William J. Marshall of DuPont Central Research & Development report a simple synthesis of the F version (shown). They prepare it by reacting a dirhodium complex with triethylamine trihydrofluoride in the presence of triphenylphosphine [J. Am. Chem. Soc., 126, 3068 (2004)]. The X-ray structure of the F analog reveals Rh2P bond distances and angles surprisingly similar to those in the Cl version, the researchers note. This is unusual, they say, as the properties of most late-transition-metal fluorides differ considerably from their chloro, bromo, and iodo counterparts. The F analog displays stability and some reactivity patterns like Wilkinson's catalyst, they add. But unlike the Cl complex, the F catalyst can cleave carbon-halogen bonds in aromatic compounds--such as the C2Cl bond of chlorobenzene--under mild conditions, forming new rhodium complexes.

-cyclodextrin molecules. Treating an aqueous suspension of this complex with 100 equivalents of sodium bisulfite under 1 atm of N2 at 60 ºC for 1 hour produces a 33% yield of ammonia. Temperature, neutral pH, and the combination of reactants are all crucial to the reaction's success. The group thinks light may assist electron and energy transfer from electron-rich C60 in the C60•

-cyclodextrin complex to N2 in the nitrogen-fixing process: The reaction doesn't work in the dark, and irradiation with a high-pressure mercury lamp increases the yield.

Scientists have devised a potentially inexpensive and practical method of preparing spin-coated thin-film semiconductors. Solution-processed thin films are being eyed for applications such as displays and solar cells, which would benefit from the ability to conveniently deposit the semiconductor over large areas. But past efforts to make spin-coated semiconductors have been hampered by organic materials' low electrical mobility and by inorganic semiconductors' poor solubility. Now, chemist David B. Mitzi and colleagues at the IBM T. J. Watson Research Center, Yorktown Heights, N.Y., have dissolved metal chalcogenides in hydrazine, boosting the solubility with sulfur or selenium [Nature, 428, 299 (2004)]. After spinning and heating, the result is a relatively uniform metal chalcogenide film only 5 nm thick. Electrical charge moves through the film about 10 times faster than it does for other spin-coated semiconductors. The process will require more work to be made low-cost and large-scale, but Mitzi's lab has already improved the method, replacing most of the hydrazine with water.