Rover finds chemical and other evidence for ancient body of water 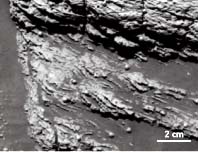 Credit: JPL PHOTO
This view of the lower portion of the martian rock called Last Chance shows textural evidence that sediments were deposited in flowing water.

The Mars Rover Opportunity is apparently sitting on the shore of what was once an ancient briny sea, a body of water that could have been habitable, elated scientists announced last week at a press conference.

The discovery comes on top of the report three weeks ago that rocks examined by Opportunity contain sulfate salts formed in the presence of water. At the time, the scientists couldn’t say whether that water was merely an upwelling of groundwater or an ocean on the surface. But now, they have strong evidence that there was liquid above ground. “This is the difference between water you draw up from a well and water you can swim in,” Steven W. Squyres, astronomy professor at Cornell University and head of the rover science team, told reporters at the National Aeronautics & Space Administration’s headquarters in Washington, D.C. The finding, which rover scientists held off releasing until they had obtained outside peer review, is a remarkable confirmation of long-held beliefs that Mars has a wet history. And where there was water, there could have been life, a possibility to be explored by future Mars missions, said James B. Garvin, lead scientist for Mars and the moon at NASA headquarters. “This is as good as it gets,” Garvin said. “Four years ago, I never would have believed we’d be sitting here talking about water laying [down sediments] on Mars. It’s really the stuff of dreams.” The team focused on two lines of evidence from an exposed outcropping of rocks in a tiny crater inside which Opportunity fortuitously landed. First, Squyres said, Opportunity detected varying amounts of bromine in the rocks, which is characteristic of rocks on Earth formed by evaporating seawater. But the clincher was their study of stratigraphic features known as “cross-bedding” in the rocks. These are ripples formed when mineral grains migrate under the influence of flowing water, producing layering at an angle to the surface, said John P. Grotzinger, rover geologist and geology professor at Massachusetts Institute of Technology. “Ripples that formed in wind look different than ripples formed in water,” he said. The scientists said they don’t yet have any idea how big the body of water was, or at what period in martian history it existed. Opportunity’s next explorations may help answer those questions. The rover has now rolled up and out of its crater, onto the flat Meridiani Planum, and will move toward another crater with a thicker outcropping. The rover will also be able to further examine so-called blueberries, spherules in the surrounding rock that scientists recently discovered are composed of hematite. The berries also are littered across the flat surface of Meridiani Planum, so the rover team would like to see if they have the same origin as the embedded ones. Meanwhile, Spirit is halfway around the planet in the rocky Gusev Crater, examining a rock named Mazatzal. NASA already has plans for future Mars missions: The Mars Science Laboratory, which will be equipped with a new generation of analytical instruments, is planned for a 2009 launch. The ultimate goal, however, is a sample return mission, which will allow scientists to examine martian rocks for biomarkers and fossils of microscopic organisms. And at least for now, they’re setting their sights on Meridiani Planum, with its saltwater past, said Edward J. Weiler, NASA’s associate administrator for space science. “If you’re searching for fossils on Mars, this is the first place you’d want to go.”