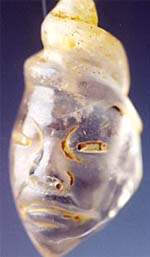 Credit: COURTESY OF JOHANN WOLFGANG GOETHE UNIVERSITY
This quartz pendant made by an ancient Mexican civilization is dated at A.D. 1 using the quartz hydration technique.

By measuring the thickness of the so-called hydration layer of quartz-containing artifacts and other materials, researchers can determine their age with a high degree of accuracy, according to a new study [J. Archaeol. Sci., 31, 883 (2004); http://www.sciencedirect.com/science/journal/03054403].

The new method—quartz hydration dating—can date artifacts from 100 to 100,000 years old, filling a chronological gap for artifacts and other materials that are between 50,000 and 100,000 years old, and for which current dating techniques are mostly ineffective. Materials containing quartz are common and have been used for millennia to make tools, housewares, and decorative objects. When quartz crystals are fractured or carved, the researchers who developed the technique explain, water diffuses into the fresh surface to form a hydration layer that increases in thickness with age. Recognizing this phenomenon, archaeological scientist Jonathon E. Ericson of the University of California, Irvine, and coworkers at Johann Wolfgang Goethe University, Frankfurt, bombarded quartz samples with 15N ions, which react with hydrogen in water or other molecular species to produce 12C, an alpha particle, and gamma rays. The gamma-ray yield is measured at various energy levels to create a concentration curve that represents the depth of the hydration layer. The team then developed a general equation for the rate of diffusion of water into the quartz surface. Comparing the diffusion rate with the layer depth allows researchers to determine a sample’s age.