Tests will determine size, purity, and toxicity of discovered powder

DEADLY
[+]Enlarge
Credit: MARK A. OLSON/USAMRIDD
Ricin's A chain is shown in blue and B chain in red. 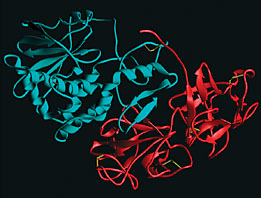 Credit: MARK A. OLSON/USAMRIDD
Ricin's A chain is shown in blue and B chain in red.

The anthrax attacks of October 2001 have had one salutary effect: Congress was better prepared for the recent ricin scare that harmed no one and only temporarily closed three Senate office buildings.

Officials have not released information on the "purity, formulation--whether other chemicals were added--or particle size" of the ricin used, says Jonathan B. Tucker, a bioweapons expert with the Monterey Institute. "The fact that no one has become ill suggests that the material was crude and not particularly dangerous as an aerosol threat."

Unlike anthrax, ricin is not infectious and "is not a good mass casualty agent," says David R. Franz, a senior biological scientist at Midwest Research Institute and former commander of the U.S. Army Medical Research Institute of Infectious Diseases (USAMRIID). It makes a good terror weapon, however, especially if injected or inhaled at high concentrations. It is much less toxic if ingested, and skin contact is harmless if there are no cuts.

Although more attainable than other biological agents, ricin is difficult to make into an effective military weapon, Franz says. The U.S., then-U.S.S.R., and Iraq all considered and eventually discarded ricin as a bioweapon. It is banned under the chemical and biological treaties.

Ricin is extracted from the seeds of the widely available castor bean plant. It consists of two 30,000-dalton molecular weight chains connected by a disulfide bond. The molecule's B chain binds to the cell wall, facilitating transport of the A chain into the cell. The A chain inhibits protein synthesis and kills the cell.

"At the cellular level, the point of no return happens very quickly," Franz says. There is no antidote for ricin, and a vaccine would be ineffective if administered after exposure to the toxin, he says.

Ricin can be identified quickly using handheld chromatographic antibody-based assay plates that are sensitive and generally don't produce false positives. The U.S. Capitol Police could have used such an enzyme-linked immunoassay (ELISA) to get initial readings.

More sophisticated ELISAs could be used to confirm initial findings. Samples of the powder were sent to several labs, including a naval research facility, a private research institute, and the Maryland Public Health Laboratory, which is part of the Centers for Disease Control & Prevention's (CDC) lab response network.

Maryland's lab director, John M. DeBoy, says his lab received four samples that "looked like paper dust which came from a federal government building." Three of the four samples tested positive for ricin using time-resolved fluorescence immunoassay, or what he calls "a souped-up ELISA." He was told that the naval lab also received four samples, possibly aliquots of the original collected powder.

Polymerase chain reaction (PCR) could be used to detect castor bean DNA in impure ricin preparations, and CDC and military labs have been or may be slated to do so. USAMRIID is performing electron microscopy on the collected material to determine its particle size. Another PCR method, immunoPCR, also could be used. In this method, a marker DNA is tagged onto an antiricin antibody that is reacted with the unknown sample. If ricin is present, the DNA-tagged antibody would latch onto the ricin antigen and be amplified by PCR.

A "gold standard" test would be injection of sample material into lab animals. But Franz suspects that not enough material was collected from Frist's mail room to conduct such tests, so toxicity will likely be determined in human cell cultures.

Environment
After Amerithrax: Biodefense in a post-9/11 America
Safety
NIH Finds More Forgotten Deadly Agents
Policy
Experts Discuss The Threat Posed By Ricin
Share X
To send an e-mail to multiple recipients, separate e-mail addresses with a comma, semicolon, or both.
Title: TOXIN FOUND IN SENATE MAIL ROOM
Author: LOIS EMBER
Chemical & Engineering News will not share your email address with any other person or company.