DNA VACCINES GET A SHOT IN THE ARM

MEDICINE BALLS
[+]Enlarge
Credit: COURTESY OF ROBERT S. LANGER
These poly(ortho ester) microspheres have an average diameter of 5 µm, an appropriate size for targeting the immune system's sentry cells. The polymer's R and R´ groups are derived from various diols and N-methyldiethanolamine. 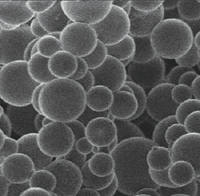 Credit: COURTESY OF ROBERT S. LANGER
These poly(ortho ester) microspheres have an average diameter of 5 µm, an appropriate size for targeting the immune system's sentry cells. The polymer's R and R´ groups are derived from various diols and N-methyldiethanolamine.

The use of DNA--rather than dead or weakened pathogens--as a vaccine may get a boost, thanks to a polymer developed for slow release of the DNA within the immune system's sentry cells.

DNA vaccines work by delivering an oligonucleotide to a cell where the vector produces an encoded antigen protein that is then displayed on the cell's surface. This antigen elicits an immune response just like a conventional vaccine.

The DNA vaccine, however, offers several advantages over its conventional counterpart. In particular, it could be used to protect against HIV, where inoculation with a dead or attenuated virus is too risky.

The trick is getting the DNA to the appropriate cells without degrading it. Embedding polymers with a DNA plasmid offers one attractive means of delivery. But polymers currently used to deliver proteins and small molecules have met with limited success when it comes to DNA.

The researchers chose POE because it degrades via hydrolysis to nontoxic products. And, unlike some off-the-shelf drug-delivery polymers, when POE breaks down it doesn't generate an acidic environment that could affect the DNA's bioactivity. The group also was able to fine-tune the rate at which the polymer releases DNA by adding a tertiary amine to the POE formulation. They suspect that electrostatic interaction between the protonated amine and the DNA increases the time it takes for the polymer to release the DNA.

"We believe that time release is critical," Wang says. The group argues that the vaccine's potency hinges upon the DNA delivery being synchronized with the body's natural immune response. If the nucleic acid is released too soon, they say, the APCs would display the antigen before they become activated and reach the lymph nodes, and the immune system could actually develop a tolerance. "This is the opposite of immunization," Wang explains. "The body ignores the antigen, and that's not what we want."

Derek O'Hagan, head of vaccine delivery research at Chiron Corp. describes the report as a "nice piece of work." But he cautions that, "although the observations are encouraging," the work is at a very early stage and needs to be reproduced with more relevant antigens, particularly those that will allow their protective effect against important infectious diseases to be evaluated.

In an accompanying commentary, Daniel W. Pack, a chemical engineering professor at the University of Illinois, Urbana-Champaign, writes, "Ultimately, advances in delivery technology, including new materials and methods, will help make DNA vaccines a clinical reality."

Drug Development
DNA-based switch can regulate the activity of a clot-busting enzyme
Materials
Synthetic Cells Elicit Immune Response For Cancer
Drug Delivery
Nanoparticles Deliver Three Cancer Drugs To Tumors
Share X
To send an e-mail to multiple recipients, separate e-mail addresses with a comma, semicolon, or both.
Title: DNA VACCINES GET A SHOT IN THE ARM
Author: Bethany Halford
Chemical & Engineering News will not share your email address with any other person or company.