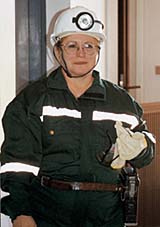 Credit: PHOTO BY MOUNA KADIRI
C&EN's Patricia Short gets outfitted to go into Managem's zinc mine.

One of the hottest sectors of nanotechnology--nanoparticle zinc oxide--is becoming a little bit hotter with the entrance of a new player into the marketplace. 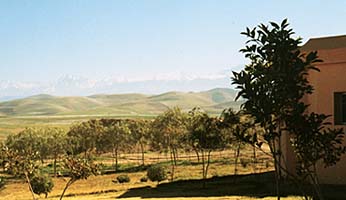 Credit: PHOTO BY PATRICIA SHORT
The land around Managem's zinc mine in Guemessa, site of labs, plants, and administration buildings, has been planted with various trees.

Managem entered the zinc oxide business in 2002, opening a new plant next to its zinc mine in Guemassa, about 20 miles southwest of Marrakech in the foothills of the Atlas Mountains. It is already selling the oxide to the Southern European rubber industry and is aiming at rubber producers in the north.

But now, using technology developed by the research laboratories it established at the site in the 1980s, the company has begun pilot production of nanoparticle zinc oxide, 20 to 60 nm in diameter, for a variety of specialty applications. At the top of the list is cosmetics, especially sunscreens, where the nanoparticles contribute transparency to formulations.

That project is being followed by derivatives of cobalt such as cobalt oxides suitable for use in batteries. The firm built a pilot plant for cobalt derivatives in early 2002 and has sent out samples to test the market, says Ismaïl Akalay, managing director for hydrometallurgy and R&D at the Guemassa site. A decision is expected soon on whether to start building a full-scale plant next year.

Managem has managed to stake out a respectable position in the mining world. For example, it is among the top five producers of cobalt in the world and one of the top three producers worldwide of arsenic.

Now, though, it is aiming at a market populated by big chemical names such as BASF and Degussa. Degussa's advanced nanomaterials unit, for example, last year inaugurated a pilot reactor for zinc oxide in Hanau-Wolfgang, Germany. The new reactor can produce ton quantities per year of pyrogenic zinc oxide, aimed at the sunscreen market and other ultraviolet absorption applications.

Degussa is an $11 billion-per-year company. Managem's sales in 2002, the last year for which full figures are available, were roughly $205 million at current exchange rates. However, Benyakhlef and his team have set a target of 25 to 30% of sales from metal derivatives within five years. Mining in Morocco will be 35 to 40% of sales; mining outside of Morocco will be the remainder.

TO ACCOMPLISH that goal, the company has earmarked nearly $2.5 million annually for R&D. Most of that budget goes to the company's chemical R&D subsidiary, Reminex. Its Guemassa labs are staffed by 100 Ph.D. scientists and technicians, Akalay says, including chemists, physical chemists, crystallographers, and metallurgists.

One mark of Reminex's importance to the company: Its research projects receive approval directly from the company's divisional presidents, says Intissar Benzakour, research center director. "Other research projects are approved by the general managers of the different units. This shows that Reminex is very special."

Reminex, for example, began work in the early 1990s that led to the company's new zinc oxide process, which it has patented. Development of new processes, in fact, is one of the R&D unit's three main activities, Benzakour says. The other two are mineralogical analysis and providing support for Managem's other operations.

The labs' analysis capabilities include tools ranging from electron microscopy to X-ray fluorescence and diffraction for the detection of ores. Scanning electron microscopes are valuable for monitoring nanoparticle size, points out Abderrahman Kaddami, director of research and analysis in the mineralogical characterization unit.

Reminex has also steered Managem in environmental protection and safety. For example, it has widened certification under the international ISO 14001 environmental standards from its cobalt oxide pilot plant to the entire site.

The Guemassa site itself is a tribute to environmental awareness: Roughly 500 acres carved out of rugged, desertlike terrain in the early 1980s have been extensively planted with olive trees, groves of mimosa, and rose gardens that surround the six plants, labs, and administration buildings at the site.

In contrast to what sometimes seems a ho-hum response to ISO 14001 standards in the developed world, achieving certification for the site has been an enormous point of pride both for employees at the Guemassa site and for the rest of the company as well, according to Benyakhlef.

The certification also indicates the strengthening of environmental awareness and regulations in historically nonindustrial countries. Executives from the Swiss certifying body Société Générale de Surveillence presented Managem's ISO certificate at a red-carpet ceremony in Guemassa late last month, and on hand were Morocco's secretary of state for environment and its minister of energy and mining.

The certification, Benyakhlef says, is "important for Managem and its relationship with the authorities in Morocco." Mining and chemicals are politically important industries, he points out, and Managem's work to improve its operational standards raises government faith in the company. The certification, he says, "will help us get approvals with new projects in the future."

Business
Altana Expands In China
Business
BASF Updates Asia Strategy
Business
Rushing To Market
Share X
To send an e-mail to multiple recipients, separate e-mail addresses with a comma, semicolon, or both.
Title: A SPECIALTIES PLAY
Author: PATRICIA SHORT
Chemical & Engineering News will not share your email address with any other person or company.