Management turnovers and politics have stymied progress this year 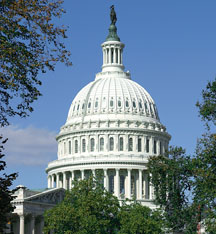 The federal government did not have a stellar year in 2005. Opportunities presented themselves but follow-ups were few. There was also significant turnover in leaders of government offices that administer research and development. So despite some action on important issues, such as energy policy, much of 2005 was unproductive.

Yes, Congress did pass an energy bill this year. Signed by President George W. Bush in August, the legislation was the result of five years of effort by the Bush Administration to increase energy production. Among other things, the legislation requires more use of ethanol in gasoline, provides tax breaks for drilling for gas and oil, and promotes energy conservation.

Then the hurricanes hit. In the aftermath of Hurricanes Katrina and Rita, gasoline prices rocketed, natural gas prices soared, and the nation's energy infrastructure was damaged. Congress immediately said that new energy legislation was needed. This time, it would open the Arctic National Wildlife Refuge to drilling, force states to lease the outer continental shelf to oil and gas exploration, and ease regulations to allow construction of new petroleum refineries. None of these measures is expected to come to pass, but many are saying they should have been in the first bill.

And speaking of things that should have been done right the first time, the National Institutes of Health completed its new rules governing conflicts of interest. Confronted last year with congressional anger following reports that some NIH researchers were accepting consulting fees from companies they were also doing scientific studies with, the agency proposed such oppressive ethics rules that several researchers resigned and many employees threatened to do so. Consulting was banned, owning biotechnology stocks was forbidden, and most outside work related to science was prohibited. The final rules, released in September, softened these requirements somewhat, and order was restored.

Order was in short supply at the Food & Drug Administration. First, the short-term commissioner, Mark B. McClellan, was named administrator of the Centers for Medicare & Medicaid Services, then, more than a year later, Acting Commissioner Lester M. Crawford, was confirmed as commissioner. But Crawford resigned in just three months in a still-unresolved controversy. He was replaced as acting chief by the head of the National Cancer Institute, Andrew C. von Eschenbach, who created a stir because von Eschenbach wanted to head both FDA and NCI at the same time.

In the midst of all this, the director of FDA's Office of Women's Health, Susan F. Wood, resigned in protest because the agency did not follow the recommendation of its scientific review panel and approve the over-the-counter sale of the contraceptive drug Plan B. A subsequent Government Accountability Office report found evidence suggesting that politics had trumped science in the Plan B case.

The management circus at FDA is probably the worst among the science-related agencies this year, but leadership turnover has been high everywhere. There is a new administrator at the Environmental Protection Agency, Stephen L. Johnson, who is the third leader there during the Bush Administration. Johnson replaced Michael O. Leavitt, who had held the job for just over a year and was promoted to lead the Department of Health & Human Services. Samuel Bodman, chemical engineer and financier, moved from the Treasury Department to head the Department of Energy in February, and Michael Chertoff was sworn in on Feb. 15 as secretary of the beleaguered Department of Homeland Security. At the National Institute of Standards & Technology, William Jeffrey replaced Arden L. Bement Jr., who went to the National Science Foundation.

An agency that really struggled this year is the National Aeronautics & Space Administration. Michael D. Griffin was named the new administrator in March, giving him the problem of what to do with the aging space shuttles. Despite a successful flight this year, new cracks in the fuel tank insulation have postponed future shuttle flights until at least next fall, if ever. Congress did pass an amendment to the Iran Nonproliferation Act that will allow the U.S. to pay Russia to take astronauts to the International Space Station, or we would have no way to get the U.S. astronaut currently up there back to Earth.

So far, Congress has not given NASA any new money to fix the shuttles, nor has it found a way to fund the nearly $8 billion program proposed by Bush to defend the nation against a bird flu pandemic. Bush's plan to amend the clean air law, the Clear Skies initiative, has not passed Congress either, and several competing bills have been introduced. The Senate made a quick stab at loosening the restrictions that scientists face in embryonic stem cell research but has not followed through. Congress also failed to rescind the Byrd amendment, which turns over to companies the fines collected for foreign trade dumping, a practice the World Trade Association had declared a violation of its rules.

Science and technology have suffered somewhat at the hand of government this year, and it has been argued that science policy is simply a low priority in the Bush Administration and thus is withering from neglect. Matters will not improve next year as most members of Congress turn their time and attention to getting reelected.