Discreet
[+]Enlarge
Credit: HOVIONE PHOTO
Many residents of Macau are unaware of Hovione's manufacturing facility, hidden by trees but located near one of the enclave's most famous tourist spots. 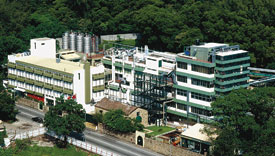 Credit: HOVIONE PHOTO
Many residents of Macau are unaware of Hovione's manufacturing facility, hidden by trees but located near one of the enclave's most famous tourist spots.

The Macau plant run by Portuguese pharmaceutical chemical firm Hovione could well be the only drug facility in the world to be located in a gaming mecca.

Macau is Las Vegas transplanted to southern China. Sands, Venetian, and other companies that operate casinos, hotels, and convention centers in Las Vegas have been setting up grandiose facilities in Macau since the end of the gaming monopoly there. Since then, Macau has experienced an unprecedented construction boom.

But Macau, a longtime Portuguese colony that switched to Chinese administration in 1999, is also one of the oldest European settlements in Asia and as such retains much of the charm arising from the blending of Portuguese and Chinese cultures over the past 450 years. There are old Catholic churches and forts turned into hotels. One easily discovers quaint restaurants on narrow streets where Cantonese-speaking Caucasian waiters dish out Portuguese specialties to local residents and foreign tourists.

Hovione's plant is a short walk from the old Taipa village, one of Macau's most picturesque neighborhoods. The plant, built on the site of an old fireworks factory, is mostly hidden behind centenarian trees. Luis Gomes, a five-year resident of Macau who is the plant's general manager, says he regularly meets people who were born in Macau and do not know about the plant, despite its location next to a major road.

The U.S. Food & Drug Administration-approved facility started operating in 1986 and was upgraded with larger vessels and automated equipment in 2001. With 120 employees, it is considerably smaller than Hovione's facilities in Portugal, where the firm has 440 employees. A pilot plant in New Jersey employs an additional 40 people.

In Macau, Hovione produces active pharmaceutical ingredients (APIs) for customers around the world. Although Hovione records about 20% of its sales in Asia, Gomes explains that the plant at which a customer's product is made depends more on the availability of suitable equipment than where it will be delivered. He adds that APIs tend to cost a lot per pound, which renders irrelevant the cost of shipping the finished product.

There are now only five Portuguese staff at the plant. Although Macau does not have a pharmaceutical industry from which Hovione can draw experienced workers, the company has been able to find personnel among Macau-born Chinese who graduate from universities abroad.

One example is Eddy Leong, who, eight years ago, having studied chemical engineering at Oregon State University, was considering his options. Family members, keen that he return to Macau, encouraged him to contact Hovione. The interview went well, and he was given the choice of either performing analytical work in the lab or working in the plant as an entry-level operator. With some misgivings, he chose the latter. He's now the plant's industrial director, with responsibility for operations, safety, health, and environment.

Leong says he strives to promote harmonious relations with the neighboring community. Since the plant was built, an apartment building and a hotel have been erected on adjoining land. "I think our neighbors may wonder what's going on when they see from their window a bunch of guys dressed in white overalls conducting emergency drills to the sound of sirens," he says.

The first "open days" Leong conducted at the plant were poorly attended, but he now gets a lot of people from local schools and neighborhood associations who have genuine interest in the operations.

Hovione set up in Macau for several reasons, Gomes says. Besides the historic connection with the firm's home country, a simple reason is that the corporate tax rate is a maximum of 12%. Another is that the Macau operation acts as a customer and source of expertise for the company's raw material purchasing office in nearby Hong Kong, which opened in 1979.

With its large pool of personnel and well-equipped facilities, the Macau plant can supply the purchasing office with testing capabilities and Chinese-speaking experts who can audit potential suppliers, transfer process technologies, and source new chemicals and building blocks from China. "In China, we have suppliers that have been working with us for 20 years; we were among their first foreign customers," Gomes says.

After nearly 20 years in Macau, Hovione has come to see itself as a stable member of the enclave's shrinking Portuguese community. Every year in October or November, the firm holds an open-air dinner in the garden on the factory's grounds to celebrate St.-Martin, a festival that marks the year's harvest and new wine. The dinner is normally attended by Diane Villax, who is the chairman of Hovione's board and the mother of the firm's chief executive officer, Guy Villax.

Waldemar Auguscinski, a Polish-born chemist working at Hovione's facility in New Jersey, says the open-air dinner reminds him of home. Auguscinski was in Macau for a few weeks to help with the industrial scale-up of a product using a process developed at Hovione's U.S. facilities. Surveying the scene of the latest St.-Martin celebration, Auguscinski notes that "it's just like the Portuguese festivals in New Jersey."

Outsourcing
How Hovione grew from a basement lab to a global pharmaceutical services company
Business
Italian Fine Chemicals Maker Flamma Advances In China
Business
China Emerging As  Pharmaceutical Chemical Market
Share X
To send an e-mail to multiple recipients, separate e-mail addresses with a comma, semicolon, or both.
Title: Hovione In Macau
Author: Jean-François Tremblay
Chemical & Engineering News will not share your email address with any other person or company.