Chemistry departments at New Orleans universities suffer less than some, but difficulties remain 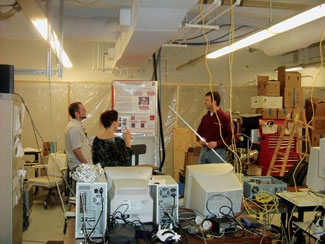 Life is far from normal in New Orleans and southern Mississippi, where the aftermath of last August's Hurricane Katrina still affects daily life, from mail to electricity. Though most of the universities in the affected areas have reopened, and a majority of students and faculty have returned, housing shortages and damaged buildings still plague these institutions.

It's in this environment that many of the universities' chemistry departments are finding themselves in surprisingly better shape than other departments at those institutions. Though a number of universities have laid off significant numbers of faculty, few chemistry professors have been let go. And though groups have lost equipment, reagents, and samples, many faculty researchers and students are back at work in the lab.

"We're more back to normal than I thought we were going to be last November," says Gary L. McPherson, Tulane chemistry department chair. Tulane's science building, Percival Stern Hall, suffered minimal damage, and the entire chemistry faculty, most of the graduate students, and 90% of the undergraduate students are back.

"We're still replacing some reagents, but most of our major equipment is in good shape," chemistry professor Larry D. Byers says.

After spending a semester at Rutgers University in New Jersey, Tulane physics professor Ulrike Diebold's surface science lab is up and running again. She's lost some of her basement floor space, while workers repair damage from water and mold. She and her group recently celebrated their return with a party in the French Quarter.

"My students are working under somewhat crowded conditions, but the main thing is that we're doing experiments again," Diebold says. "It's hard to say how relieved I am."

Compared with the more than $100 million in damage reported by Tulane, Loyola University in New Orleans fared extremely well, assessing its losses at about $4 million. "Out of all the universities in New Orleans, we probably came out the best," says Kurt R. Birdwhistell, chair of Loyola's chemistry department.

Only part-time, adjunct faculty were laid off, he notes, but as a result, professors at Loyola are taking on bigger teaching loads this semester. Though it's straining their resources now, they're more worried about long-term prospects for the university. "Probably the biggest concern is what will happen in the fall of 2006," Birdwhistell says.

The chemistry department at Xavier University in New Orleans initially laid off a quarter of its faculty members but then rehired most of them when more students than anticipated came back. Faculty members are feeling a bit unsure of the situation, but "it's not terrible," says Cheryl Klein Stevens, chemistry department chair. The department lost some equipment and a lot of supplies, "but I think we'll recover and we'll be fine," she says.

The University of New Orleans (UNO) was hit a bit harder, and though it began offering a nearly full schedule of chemistry classes in January, six of the 18 chemistry professors are still at other institutions, says Edwin D. Stevens, chair of the chemistry department. They will be returning to UNO this fall, he says.

UNO's chemistry labs are temporarily housed in the biology building while the chemical sciences building undergoes repair, says Stevens, who is married to Xavier's Klein Stevens. Though the building recently reopened, there's still no phone or Internet service, and research has not resumed. Stevens estimates that it will take $80,000 to repair damage to three nuclear magnetic resonance spectrometers and a mass spectrometer.

Despite the outward signs of recovery, many schools are still facing major difficulties. The Gulf Coast campus of the University of Southern Mississippi is "still in bad shape," says Robert C. Bateman Jr., chair of the chemistry department. "We teach only a handful of chemistry courses there, so it hasn't affected our department as much as it has some others." But the department is still reeling from major losses of cell lines and reagents.

Katrina has forced Tulane to restructure its schools of liberal arts and sciences and of engineering. The university has discontinued most of its engineering majors, including civil, environmental, and electrical. Chemical engineering has been spared, and the science and engineering departments will now be combined into one school.

Two New Orleans institutions, Dillard University and Southern University at New Orleans (SUNO), were severely damaged during the hurricane, and they've been forced to hold classes in hotels. Xavier University is lending lab space to researchers at Dillard.

Some observers say SUNO, which sustained more than $350 million in damage, may not recover. Great portions of that university have been closed. C&EN was unable to reach SUNO's former chemistry department chair.

"I think Dillard will probably be fine," Klein Stevens says, "but SUNO, I don't know."

Education
UNC Wilmington chemists relocate in wake of Hurricane Florence
Education
Recession Chemistry 101
Share X
To send an e-mail to multiple recipients, separate e-mail addresses with a comma, semicolon, or both.
Title: Academic Chemistry After Katrina
Author: Elizabeth K. Wilson
Chemical & Engineering News will not share your email address with any other person or company.