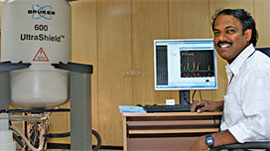 Credit: Photo by Amanda Yarnell
Equipment like this 600-MHz NMR spectrometer used by Bharatam Jagadeesh is increasingly available in India.

Earlier this month, President George W. Bush traveled to India with an ambitious agenda, including expanding U.S.-Indian scientific cooperation. Bush and Indian Prime Minister Manmohan Singh announced the establishment of a new $30 million science and technology commission that will fund joint research in promising areas such as biotechnology.

This bilateral push to promote ties between U.S. and Indian scientists comes at a time when India is vying to vault itself onto the world stage. Fueled by a highly trained workforce of synthetic chemists, India is seriously challenging the U.S. and Europe for supremacy in producing active pharmaceutical ingredients, advanced intermediates, and other fine chemicals. It now hopes to do the same in innovation-intensive sectors, including drug discovery, biotechnology, and materials science. The repatriation of Indian chemists from abroad is accelerating the new emphasis on innovation, as are increased links between academic and industrial scientists in the country. But India also needs to educate the multidisciplinary scientists required to support these new sectors and effectively exploit its greatest resource: its youth.

Half of India's 1.1 billion citizens are under the age of 25. Yet the country's brightest students continue to flock to the U.S. and Europe to work and study. India must find a way to keep more of them and encourage them to pursue research careers.

This goal will undoubtedly require India to reinvigorate its academic research culture. India's academic scientists are finding it easier than ever to fund their research; the latest budget includes $4.5 billion for science and technology research, a 16% hike from the previous year. But creative, groundbreaking science continues to be hindered by feudalism, bureaucracy, and a scientific culture that encourages submission and discourages risk-taking.

As the stories on the following pages show, India is beginning to rise to these challenges. Backed by a rapidly growing private sector and a government that values science, India is poised to transform itself into a world-class science and technology powerhouse.

Share X
To send an e-mail to multiple recipients, separate e-mail addresses with a comma, semicolon, or both.
Title: Indian Science Rising
Author: Amanda Yarnell
Chemical & Engineering News will not share your email address with any other person or company.