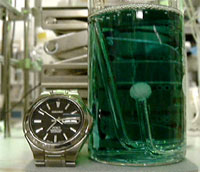 With an eye toward producing large quantities of hydrogen, scientists have created a new photocatalyst that splits water 10 times more efficiently than previously reported similar photocatalysts. When exposed to visible light, the catalyst-a solid solution of gallium nitride and zinc oxide impregnated with nanoparticles of a mixed oxide of rhodium and chromium-splits water, producing hydrogen gas with a quantum efficiency of 2.5%, according to Kazunari Domen at the University of Tokyo and colleagues (Nature 2006, 440, 295). The mixed oxide appears to be key; rhodium or chromium oxide alone does not improve the catalyst's activity. The authors report the reaction's efficiency increases with short-wavelength light. The catalyst performed repeated runs for 35 hours without degrading. The authors also say the catalyst could be improved to work well at long wavelengths of light.