Electronics are key for Honeywell and other firms, but critics want bigger barriers and safer technologies 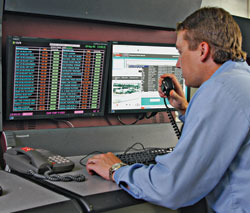 The drive from New Orleans to Honeywell's Geismar, La., fluorocarbons plant takes about an hour and a half. The 60-mile excursion west along Interstate 10 first passes through neighborhoods dotted with blue tarps that still cover roofs damaged when Hurricane Katrina swept through last August.

Outside the city, the highway skirts the edge of Lake Pontchartrain and traverses swamps before arriving in an area dotted with widely separated chemical plants. About 10 minutes off the highway, Honeywell's most secure facility looms ahead.

Here the firm manufactures hydrofluoric acid, a hazardous and corrosive material that the company uses to make non-ozone-depleting refrigerants, also at the Geismar site. A release of hydrofluoric acid by accident or as the result of a terrorist attack could create a toxic cloud that would have a deadly effect should it reach the state capital, Baton Rouge, just about 20 miles to the north.

Depending on whom you speak to, Honeywell's plant is either the poster child for the best plant security money can buy or an example of how far the chemical industry will go to resist inherently safer technology, a manufacturing approach that calls for the use of chemicals and processes that are less likely to explode or cause harm in the event of an accident or attack.

Department of Homeland Security (DHS) Secretary Michael Chertoff may have had just this kind of secure plant in mind when he called last month for Congress to pass legislation "to make sure we have the proper level of safety in the chemical sector" (C&EN, March 27, page 7).

However, the Honeywell plant is probably not the kind of facility Sens. Frank R. Lautenberg (D-N.J.) and Barack Obama (D-Ill.) had in mind when, following Chertoff's request, they instead proposed their own Chemical Security & Safety Act (C&EN, April 3, page 17). It would require companies to use safer chemicals when possible and calls for perimeter barriers around chemical plants.

According to Honeywell officials, the Geismar plant represents the state of the art when it comes to chemical plant security. It is a showcase, they say, for how to secure a large chemical plant against intruders.

The American Chemistry Council (ACC), the industry's leading trade association, established a security code following the terrorist attacks of Sept. 11, 2001, requiring members to secure facilities, starting with those that could cause the greatest harm if attacked. Tier 1 facilities are at the top of the list. "This is a Tier 1 plant," says Harry Sim, vice president of marketing for Honeywell Process Solutions.

Honeywell's specialty materials unit operates the 1,900-acre site, which sits alongside the Mississippi River, but the firm's automation and control systems group installed security and process system upgrades. The group also sells its security systems to other chemical industry customers.

Before September 2001, the site was not even fully fenced in, according to Bill Lessig, plant site manager. "This was an open site with just a few security guards to prevent theft," he said at a briefing for reporters who visited the site last month.

But with an investment of $3 million, including a $1 million grant from DHS, Honeywell installed the most advanced security system available. The entire plant is now fenced in, Lessig said. Fence-line sensors, underground sensors, microwave detectors, radar, and video cameras make up a perimeter intrusion system. Electronic data gathered at the fence line feed into a command center outfitted with software that can distinguish between "normal" activity and an intruder.

Video cameras and radar track river traffic near docking facilities that Honeywell operates and shares with other firms. On a tour of the site, Honeywell showed reporters real-time video of waterfront activity. Large commercial vessels transmit identification signals, which the system reads and tracks within a mile of the dock. Smaller vessels are also tracked, and Honeywell officials said the system assesses threats depending on the speed and direction of the object.

The tour included a look at smart cards and biometric devices used to control access to gates and doors. And it provided a glimpse of the visitor-management system, which identifies and compares visitors with government-issued "watch lists" before issuing badges.

Honeywell officials said their security system, which took about 16 months to design and install, also has safeguards to prevent cyber attacks. The firm's software can thwart a malicious outsider's attempt to manipulate process controls and create an accident.

According to ACC, member companies have spent more than $3 billion on plant security since Sept. 11, 2001. The legislation envisioned by Chertoff would include many of the security protocols ACC members have already taken up.

Some of the money that ACC members have spent on security has gone to security system providers other than Honeywell. Barry C. Einsig, business development manager for Tyco's ADT division, says his firm experienced a big increase in business since 2001 from chemical customers with facilities both inside and outside the U.S.

Many of the chemical plants his firm helps secure are big and situated in open, high-traffic areas. "It is critical," Einsig says, "to take a multilayer approach to security in those situations." Fence-line sensors, video surveillance, and lighting all help prevent false alarms, he said. Radar works well to protect waterways.

"By definition, chemical plants are high-hazard environments," notes Thomas Gillis, vice president of engineering for United Technologies' fire and security business. "There is always a trade-off between costs, the risk-probability of threats, and the probability of consequences," Gillis says. The firm's software "can detect and predict threats. We can also integrate our software with process controls for an appropriate response when it is called for," he says.

In testimony before the Senate Homeland Security & Governmental Affairs Committee last July, Turner said DuPont endorses the concept of inherently safer technology. Such technology, she said, "is a mainstream component of process safety and has a role to play as companies evaluate security."

However, Turner explained, "each chemical process is a complex and unique combination of piping, pressure vessels, tanks, pumps, valves, raw materials, and operating conditions such as temperature and pressure. Given the complex and unique nature of each process, safety evaluations require special expertise and consideration of a range of options. Therefore, companies must have the flexibility to assess and decide upon options."

Rick Hind, a spokesman for the environmental group Greenpeace, contends that the solution isn't as complex as Turner makes out. "We propose that companies adopt safer technologies and not rely on an imperfect security system." According to Hind, military strategists say no plan survives first contact with the enemy. "You can't secure a chemical plant and make it safe."

As Congress and the nation debate chemical plant security, the question is whether the security installations at Tier 1 plants are like the tarp-covered roofs dotting New Orleans: quick fixes to avoid the threat of future problems. Jack D. Bolick, president of Honeywell Process Solutions, says the company's priorities are the environment, safety, and security. "If someone is trying to get into the plant, we can bring the system down safely." But, he admits, "we don't have all the answers."

Greenpeace's Hind argues that the answer is inherently safer chemical technology, which he says the industry would successfully adapt if it were forced to. "I find it odd," he says, "that Greenpeace has more faith in the ingenuity of American industry than industry has in itself."