In 1984, the blockbuster movie "Ghostbusters" put a whole lot of marshmallow on the big screen. In the film, three out-of-work parapsychology professors decide to start a business to rid New York City of supernatural entities with technology they designed. A sudden surge in paranormal activity puts their services in high demand. When they confront the major enemy spirit, named Gozer, they try to keep their minds blank so as not to conjure Gozer in any material form. But a benign fictional icon pops into the head of Raymond Stantz (played by Dan Ackroyd) and materializes on the city street. To this day, fans of the movie can still quote Stantz's reasoning: "I tried to think of the most harmless thing ... something I loved from my childhood."

What materializes is Mr. Stay Puft, a skyscraper-tall marshmallow man with a goofy grin and a tiny blue sailor hat, who proceeds to topple lampposts and mailboxes with seismic, lumbering footsteps. It is a memorable manifestation of the sweet and squishy treat.

Back to reality. Winter brings minimarshmallows bobbing in hot cocoa and complementing sweet potatoes. Spring ushers in brightly colored treats shaped like chicks and bunnies. In summer, fluffy marshmallows toasted over a barbecue grill and sandwiched between chocolate and graham crackers are popular treats known as s'mores. Year round, peanut butter and marshmallow crème sandwiches pop up at lunch tables.

Naked Chicks
[+]Enlarge
Credit: IMAGES COURTESY OF JUST BORN
With their bottoms covered in yellow sugar, these marshmallow chicks parade toward a wind tunnel that will cover the tops of the candies in the same color. 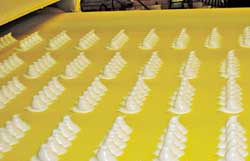 Credit: IMAGES COURTESY OF JUST BORN
With their bottoms covered in yellow sugar, these marshmallow chicks parade toward a wind tunnel that will cover the tops of the candies in the same color.

According to the National Confectioners Association, Americans spend more than $125 million annually for upwards of 90 million lb of marshmallow. The association equates that weight to 1,286 gray whales.

Marshmallow originally was derived from the roots of Althaea officinalis, a pink-flowered mallow plant that grows wild in marshes, hence its name. In the Middle Ages, the mucilaginous sap soothed colds and sore throats. The ancient Egyptians enjoyed mallow sap with nuts, a gooey treat they reserved for gods and royalty.

In the 1800s, candymakers in France sweetened, whipped, and molded the gummy sap into a more modern marshmallow. Its unique texture appealed to many consumers. To keep up with demand, marshmallow makers developed new recipes and processes.

By the early 20th century, mallow root extract was replaced by egg whites or gelatin. Both of these proteins are more readily available and have well-studied foaming properties. Today's marshmallows generally contain corn syrup, modified cornstarch, sugar, gelatin, and a lot of air. Although most marshmallow products today do not contain egg whites, this ingredient is still used to give marshmallow crème its gooey texture. Some products also have added colors or flavors, including vanilla, strawberry, and raspberry.

Miang Lim, a senior lecturer in the food science department at the University of Otago in New Zealand, collaborates with marshmallow researchers at Cadbury Confectionery Ltd., Australasia. She says gelatin forms fluffy foam that maintains its elastic and spongy qualities much longer than fresh egg whites.

As a whipping agent, gelatin binds large amounts of water into marshmallow. The moisture is key to extending the product's shelf life, explains Scott Yeager, R&D manager for Just Born, the largest manufacturer of novelty marshmallow products worldwide. These products, including marshmallow chicks, bunnies, and other shapes, stay fresh for up to 24 months.

Gelatin is a mixture of polypeptides. Its amphiphilic nature gives it foam-stabilizing properties. A typical gelatin polypeptide contains the amino acids alanine, glycine, proline, arginine, glutamic acid, and hydroxyproline. It is prepared from collagen, which is isolated from animal bones and fish skins with a dilute acid.

According to some religious dietary laws, eating gelatin prepared from animals is unacceptable. Fish gelatin is used by the pharmaceutical industry to make pill capsules, but it is scarcely used in food products because it is expensive. Food scientists have therefore tried to make marshmallows with soy, pectin, agar, carrageenan, and other hydrocolloids as alternatives to gelatin, but they have had little luck maintaining the desired qualities, no matter what the manufacturing process is.

Few marshmallows are handmade today. The advent of automated marshmallow-making helped the sweet gain popularity in the U.S. in the 1950s. Alex Doumak, a marshmallow manufacturer, introduced an extrusion process that produced pieces of the same size and shape. Kraft, which produces what it says is America's favorite brand, Jet-Puffed marshmallows, has maintained its recipe and used the extrusion process since 1953, according to company statements.

Marshmallows can also be shaped by two types of "deposit" processes. One process loads marshmallow into starch molds. By allowing the marshmallow deposits to sit in the molds, the amount of moisture in the confections is reduced so that the deposits can, for example, be coated with chocolate. The other deposit process produces shaped marshmallows that do not require drying in starch. They include sugar-coated marshmallows with specialized shapes such as the chicks and bunnies mentioned earlier. To generate such shapes, moving nozzles dispense marshmallow onto a conveyor belt.

Although marshmallow is a simple food, it undergoes changes due to sucrose crystallization, cross-linking of gelatin molecules, and glassy formation of sucrose and gelatin during processing, Lim says. Such changes are exploited to produce highly crystallized, "grained" marshmallow products, like those orange-colored circus peanuts that break rather than stretch.

Good thing the sugar didn't crystallize and the gelatin didn't cross-link in Mr. Stay Puft, or the Big Apple would have had to deal with more than just an exploded, gooey marshmallow when the Ghostbusters took him down.