Fixated
[+]Enlarge
Credit: Photo by John Curley
Cummins and his group at MIT are devising new approaches to activate N2, P4, and other small molecules to create synthetic reaction cycles. From left: McKellar, Piro, and Cummins. 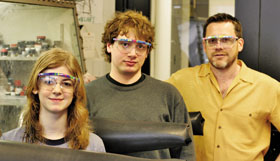 Credit: Photo by John Curley
Cummins and his group at MIT are devising new approaches to activate N2, P4, and other small molecules to create synthetic reaction cycles. From left: McKellar, Piro, and Cummins.

Chemists have long been enamored with nitrogen fixation, the process nature employs to help plants capture atmospheric nitrogen and convert it to ammonia for use as a nutrient. Besides the famous Haber-Bosch industrial process to convert N2 to NH3, hundreds of transition-metal complexes involving N2 have been prepared over the years in an effort to mimic nitrogen fixation. The exact enzyme-mediated mechanism that nature uses to fix nitrogen is still a bit of a mystery, however, so deciphering the chemistry continues to captivate researchers.

Be that as it may, N2 isn't the only small molecule amenable to "fixation" that has piqued the curiosity of chemists. Massachusetts Institute of Technology inorganic chemistry professor Christopher C. (Kit) Cummins and his research group have spent the past decade pursuing metal complexes that also can fix elemental phosphorus (P4) and other small molecules. A breakthrough for the Cummins group came a few years ago in the form of a niobium complex having a terminal niobium-phosphorus triple bond. This niobium complex now serves as a workhorse to transfer phosphorus atoms to organic molecules or to ligands bound to transition metals under mild reaction conditions.

Unlike N2, elemental phosphorus isn't readily available in a pure form in nature, Cummins points out. White phosphorus, or P4, one of the element's allotropes, is derived by reduction of apatite, a phosphate mineral. White phosphorus is used to make phosphoric acid, phosphorus trichloride, and other commercial reagents vital to research and industrial syntheses.

"Making monophosphorus compounds directly from P4, rather than first making commodity reagents, would be more efficient, safer, and greener chemistry," Cummins says. This approach could someday be standard for production of polymers, agricultural chemicals, and pharmaceuticals, he notes.

One potential application area for the triple-bonded complexes is reactivity akin to alkyne metathesis, a reaction that hasn't yet been developed for phosphorus triple bonds, Cummins observes. Alkyne metathesis is the triple-bond version of Nobel Prize-winning olefin metathesis, which has had a tremendous impact on organic synthesis and polymer chemistry. Cummins expects the metal-phosphide chemistry will also lead to novel phosphine catalysts or ligands.

"Cummins' group has been the pioneer in synthesis of terminal phosphide ligands in transition-metal complexes," notes chemistry professor Gregory L. Hillhouse of the University of Chicago. "This work is not only highly creative but of fundamental importance in that it explores and develops the most basic of chemical transformations−atom-transfer reactions−and the synthetic precursor of these transformations is simply the element itself."

Cummins' group proceeded to do extensive work on molybdenum and other metal trisamide complexes, which has resulted in reactions with N2, P4, and CO to form terminal anionic Mo≡N, Mo≡P, and Mo≡C complexes. A number of researchers are exploring the potential of these complexes for transfer of the terminal ligands to organic molecules. For example, the carbide complex is a potential precursor for alkyne metathesis catalysts (Angew. Chem. Int. Ed. 2006, 45, 862). But the Mo≡P complex has proven to be relatively unreactive for phosphorus atom transfer, Cummins says.

After gleaning some clues from the literature about the reactivity of niobium complexes, Cummins' group decided to try to migrate the chemistry from molybdenum, in group 6 of the periodic table, to niobium, in group 5. The researchers settled on a trisamide complex dubbed niobaziridine hydride. In this complex, a hydrogen atom from the methylene carbon of the neopentyl group [−CH2C(CH3)3] on one of the amide ligands migrates to the niobium atom, and the neopentyl chain doubles back on the metal center to form a three-membered Nb−C−N ring.

Niobaziridine hydride readily reacts with P4 to form a dimer in which two niobium atoms are coupled together by a diphosphorus bridge, forming an Nb2P2 "butterfly" core structure, Cummins explains. Subsequent reduction of the dimer by Na/Hg amalgam in tetrahydrofuran cleaves the P2 bridge, forming the desired niobium phosphide salt, Na[P≡Nb(NRR′)3], where R is neopentyl and R′ is 3,5-dimethylphenyl.

"The neat thing about this chemistry is how we were able to move from the analogous molybdenum phosphide complex in group 6 to niobium in group 5 and maintain the same electron count," Cummins notes. "That leaves a negative charge on the niobium complex, which introduces nucleophilicity and allows us to use the complex as a platform to create new phosphorus-containing molecules."

In a series of papers during the past few years, Cummins and graduate student Joshua S. Figueroa, who is now a postdoc in chemistry professor Gerard Parkin's group at Columbia University, have presented "vignettes" on the chemistry of the niobium phosphide complex (Dalton Trans. 2006, 2161).

One reaction is a new route to make phosphaalkynes, RC≡P, by treating the phosphide complex with various acyl chlorides, such as pivaloyl chloride, (CH3)3CCOCl. The carbonyl carbon and oxygen atoms of the acyl chloride initially add to the Nb≡P bond, forming a four-membered ring. These intermediates are stable and can be isolated, but upon heating the ring undergoes fragmentation to form a niobium oxo complex and spits out a phosphaalkyne. Thus, the triple-bonded phosphorus is traded, as in a metathesis reaction, to form a C≡P bond.

Phosphaalkynes are reactive analogs of nitriles, and the tert-butyl compound derived from pivaloyl chloride is a particularly useful reagent for 1,2-addition and cycloaddition reactions to make aminophosphines and alkenes, Cummins says. Phosphaalkynes typically are made via organosilicon chemistry under harsh conditions, he adds, but the niobium phosphide complex "offers a milder route for in situ generation of phosphaalkynes that might not be available by other methods."

A bonus for the phosphaalkyne synthesis is that the niobium oxo by-product is easily recycled back to niobaziridine hydride. This type of "synthetic cycle" could be used to generate many different types of nitrogen and phosphorus compounds, he notes. For example, Cummins' group has shown that the niobium trisamide complex having an isotopically labeled terminal nitride ligand, Nb≡15N, reacts with acyl chlorides to form nitriles, RC≡15N, which are useful precursors for heterocyclic compounds containing the isotope marker (J. Am. Chem. Soc. 2006, 128, 940).

Another versatile reaction with the niobium phosphide creates ligands directly on a metal center by simply tacking on an additional molecular fragment. In one example, reaction with chlorodiorganophosphanes (R2PCl) leads to addition of the phosphane to the phosphide, creating a new phosphorus ligand, P=PR2, where R is phenyl or tert-butyl. This ligand is bound side-on to the niobium atom by π-complexation, similar to an olefin or alkyne binding to a metal.

Diphosphorus ligands have been developed for late transition metals, such as platinum, Cummins points out. But until now, they have been made only by transfer of the ligand to the metal.

In yet another example of atom transfer, Cummins and Figueroa investigated reactions of the niobium phosphide with divalent group 14 salts, such as GeCl2, SnCl2, or Pb(OSO2CF3)2. These reactions form novel quasiaromatic EP2 triangles (E stands for Ge, Sn, or Pb), which are suspended between a pair of niobium trisamide complexes.

Heavier group 14 aromatic rings haven't received much attention, even though they are analogs of important carbon species, Cummins says. For example, the EP2 triangles are isolobal with the aromatic cyclopropenium ion (C3H3+). But there's growing interest in noncarbon aromatic ring systems, Cummins notes, and his group is working to find a way to liberate the EP2 triangles as potential reagents for further chemical reactions.

"Cummins' research emphasizes the importance of doing exploratory inorganic synthesis," comments chemistry professor Philip P. Power of the University of California, Davis. New compound classes, such as the niobium-phosphorus complexes, "open up exciting possibilities for activation of small molecules and development of reagents for metathesis or atom-transfer reactions," he says.

"Chemistry of metal-ligand multiple bonds is extremely important, as exemplified by the 2005 Nobel Prize in Chemistry," adds T. Don Tilley, a chemistry professor at the University of California, Berkeley. "Many aspects of this field have yet to be mapped out, and further development of metal-ligand multiple-bond chemistry should be expected to produce useful new reactions."

Tilley notes that his group has used the niobium-phosphorus chemistry to explore cycloaddition reactions of phosphaalkynes and other triply bonded substrates with metal-silicon triple bonds. And the complexes containing the main-group EP2 ligands "represent great examples of the potential of this system," he adds.

"Cummins and his group are making valuable contributions to this topic through their beautiful and brilliant manipulation of the chemistry of the niobium complexes," Tilley concludes. "I expect much more to come from their studies."

Indeed, work on niobium-phosphorus chemistry in the Cummins lab continues apace. "It's certainly true that we have developed a fixation with phosphorus chemistry," Cummins quips. Ongoing work by graduate student Nicholas A. Piro and undergraduate Jessica T. McKellar is leading to a few surprises that are waiting to be unveiled in an important upcoming publication, he says.

Synthesis
Fluorine’s Positive Side Revealed
Synthesis
Toward Silicon Metathesis
Synthesis
New Start For Pd(III) Chemistry
Share X
To send an e-mail to multiple recipients, separate e-mail addresses with a comma, semicolon, or both.
Title: Fixing Phosphorus
Author: Stephen K. Ritter
Chemical & Engineering News will not share your email address with any other person or company.