Poison Ivy Could Get Worse 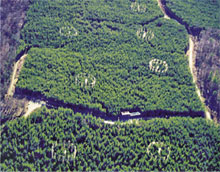 Poison ivy (toxicodendron radicans), when grown in air with elevated carbon dioxide levels that could resemble those in the atmosphere in 2050, grows faster and produces a more noxious mixture of chemical irritants than it does under present conditions, a team of researchers has found. (Proc. Natl. Acad. Sci. USA, published online May 29, dx.doi.org/10.1073/pnas.0602392103).

T. radicans and related Toxicodendron species grow throughout most of the world. According to the American Academy of Dermatology, between 10 million and 50 million Americans suffer an allergic rash each year due to contact with poisonous plants, most notably poison ivy, sumac, and oak. How these plants respond to increases in atmospheric carbon dioxide could have a bearing on human health on a global scale, conjectures Jacqueline E. Mohan of the Marine Biological Laboratory's Ecosystems Center in Woods Hole, Mass.

STRUCTURE OF ITCH
[+]Enlarge
This pentadecylcatechol is a primary component of poison ivy's urushiol oil.

This pentadecylcatechol is a primary component of poison ivy's urushiol oil.

What's worse, the researchers note, this enhancement of mass is accompanied by a troublesome shift in the proportions of the irritant compounds (pentadecylcatechols) in the plant's urushiol oil, the yellow sap that triggers the plant's signature blistery red rash. The most consequential chemical change is that the concentration of the oil's saturated congener decreases by 61% while the triene congener goes up by 153%. Urushiol's ability to elicit allergic responses increases as the ratio of the oil's unsaturated to saturated components increases. 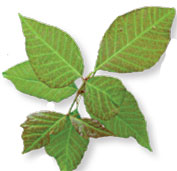 Paul R. Epstein, associate director of Harvard Medical School's Center for Health & the Global Environment, says the new findings fit a pattern of plant responses to changes in global conditions. For example, in his own studies of ragweed growing in CO2-enriched air in greenhouses, he and his coworkers have found that the weed's stalks grow 10% larger and the plants produce about 60% more pollen. "What these studies are showing is there is a disproportionate response of the pollen in these weeds and of the toxicity of poison ivy," Epstein says.

In the coming decades, Schlesinger predicts, "poison ivy will be a more dangerous plant." And the researchers suggest that ever higher CO2 levels in the atmosphere could have additional botanic effects with consequences for quality of life. Poison ivy is part of a larger taxonomic category that includes mango, cashew, and pistachio, all of which can be allergenic. "It is possible that these plants, too, may become problematic in the future," the researchers warn.

There could be some welcome outcomes among the litany of bad ones. Epstein points out that it's the weedy, viney, opportunistic plants that respond most to environmental changes like temperature and carbon dioxide levels. Says Epstein: "It could be lovely to have lots more raspberries."