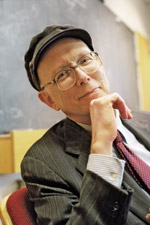 George M. Whitesides, the Woodford L. & Ann A. Flowers University Professor and professor of chemistry at Harvard University, will receive the 2007 Priestley Medal. The annual award, which is the highest honor bestowed by the American Chemical Society, recognizes distinguished service to the field of chemistry.

"I am simultaneously surprised and honored," Whitesides says. "I'm not sure that I know how to define service, but I know that I am just one of a large number of chemists who spend time trying-in various ways, and usually with unsatisfyingly ambiguous results—to be helpful to our colleagues and neighbors. Usually service is—and properly should be-anonymous, but I'm flattered to be picked out this year to represent the larger group."

Whitesides, 66, has had a long and varied career in chemistry, making contributions to areas as diverse as nuclear magnetic resonance spectroscopy, organic synthesis, materials and surface science, microfluidics, and nanotechnology.

Controlled
[+]Enlarge
Whitesides and his coworkers use self-assembled monolayers to control the shapes of cells such as this fibroblast.

Whitesides and his coworkers use self-assembled monolayers to control the shapes of cells such as this fibroblast.

"George Whitesides is a standout in terms of the range and impact of his creative work," says Mark S. Wrighton, chancellor at Washington University in St. Louis, who first knew Whitesides when they were both professors at Massachusetts Institute of Technology. "He has expanded what is meant by chemistry and built broad appreciation for the importance of chemistry among scientists, engineers, business leaders, and government leaders responsible for the federal investment in science and technology."

Whitesides has been remarkably prolific over the course of his career. He is the author of more than 900 publications and holds more than 50 patents. He was involved in the founding of Genzyme, GelTex Pharmaceuticals, and Advanced Magnetics; intellectual property stemming from his research has been important to a number of other companies. "George is an innovator and representative of the kind of scientist this country needs in order to improve and compete," Wrighton says.

Whitesides has been active in public service as well, most recently as a member of the committee that created the National Academies' report "Rising Above the Gathering Storm," which addresses issues of U.S. competitiveness in science and technology. In the international arena, he chaired a panel in 2002 that assessed the state of university research in chemistry in the U.K.

Whitesides received a bachelor's degree from Harvard in 1960 and a doctorate from California Institute of Technology in 1964, under the direction of John D. Roberts. He was a member of the MIT faculty from 1963 to 1982. Since 1982, he has been on the faculty at Harvard. He was the Mallinckrodt Professor of Chemistry from 1982 to 2004; in 2004, he was named the first Woodford L. & Ann A. Flowers University Professor.