A phosphate polymer emerges as an unsung player in blood chemistry

Circular Clues
[+]Enlarge
The dark round structures in these electron micrographs of a platelet (left) and a trypanosome (right) contain polyphosphate. 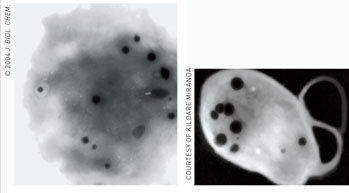 The dark round structures in these electron micrographs of a platelet (left) and a trypanosome (right) contain polyphosphate.

A clue that inorganic polymers made of tens to hundreds of phosphate units might serve previously unrecognized roles in blood clotting showed up as dark circles in two seemingly unconnected electron micrographs that cell biologist Roberto Docampo had on his desk a few years ago at the University of Illinois, Urbana-Champaign (UIUC).

One micrograph shows a single-celled parasite known as a trypanosome. The other depicts blood plasma components called platelets. To Docampo, now at the University of Georgia, Athens, the dark circles in both appeared too similar to leave uninvestigated. Now Docampo, UIUC biochemist James H. Morrissey, and their colleagues have carried out a raft of experiments indicating that polyphosphate is no bit player in blood clotting. This discovery, the researchers say, could lead to new ways of controlling bleeding.

"We have this idea that we have found all of the major players in blood clotting, so this is a surprise," Morrissey says.

In platelets, polyphosphate is largely sequestered in so-called dense granules, but it's released when the platelets are stimulated with clot-promoting factors such as thrombin. When that happens, the researchers found in benchtop studies, the polyphosphate activates the complex biochemical cascade behind clotting, interferes with an anticlotting protein, and helps delay the busting of the clot that forms by boosting the effectiveness of a clot-preserving protein in the blood (Proc. Natl. Acad. Sci. USA 2006, 103, 903).

"The net effect is accelerating the rate at which blood clots form and then prolonging how long they last," Morrissey says. The work has attracted seed money from the Roy J. Carver Charitable Trust to set up the UIUC Center for Hemostasis Research, where researchers will work toward such goals as developing new treatments for otherwise uncontrollable bleeding.