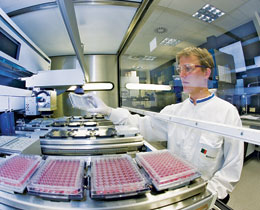 Credit: Galapagos
A Galapagos scientist conducts target screening at a laboratory in Leiden, the Netherlands.

In the competitive business of contract pharmaceutical chemistry research, many Western companies are rethinking, restructuring, or retrenching. Galapagos, in contrast, is rapidly expanding.

Belgium-based Galapagos got into chemistry research in large part to advance its own drug discovery efforts. But the company now sees research services as a full-fledged business that can bring in revenues and take some of the edge off the high-risk enterprise of discovering new drugs.

Galapagos was founded in 1999 as a joint venture between the European biotechnology firms Crucell and Tibotec; it set out on its own in 2002 after it raised money from private investors.

Armed with drug target identification technology based on short interfering RNA, the company planned to find targets and license them to pharmaceutical companies. However, as Chief Executive Officer Onno van de Stolpe recalls, the value of those targets-and of Galapagos' business model—crumbled when genomics—based firms like Millennium Pharmaceuticals started flooding the market with targets.

In response, Galapagos turned its attention to developing drugs against targets it had discovered in the field of bone and joint disease. To advance this internal effort, though, it needed chemists. It built modest laboratories at its headquarters in Mechelen, Belgium. Then a May 2005 stock offering brought in about $28 million. Four months later, Galapagos used the stock listing to acquire Cambridge, England-based BioFocus, a 110-person provider of chemistry and biology services.

With a drug discovery program and the chemistry to advance it, Galapagos was able to clinch a deal with GlaxoSmithKline to develop osteoarthritis therapies. Under the agreement, signed this May, Galapagos is set to discover targets, screen compounds against them, turn screening hits into drug leads, and take lead candidates through Phase IIa clinical trials. Much of this work will be contracted to BioFocus.

In exchange, GSK is giving Galapagos about $5 million up front, as much as $165 million in milestone payments, and up to double-digit royalties on any future commercial sales.

Last month, van de Stolpe struck one more big deal. Realizing that Galapagos would need more chemistry capabilities to serve GSK and its other customers, he reached an agreement to acquire the chemistry service operation of California's Discovery Partners International. For what van de Stolpe calls the "absolute bargain price" of $5.4 million, Galapagos picked up 100 employees, and laboratories in California, Germany, and Switzerland.

Geraldine O'Keeffe, a securities analyst with Belgium's Fortis Bank who has a "buy" on Galapagos stock, expects BioFocus DPI to bring in revenues of close to $65 million next year, a considerable jump from 2005 revenues of $14 million.

Although Galapagos' service strategy seems to be firing on all cylinders, van de Stolpe acknowledges he is making two bets that are by no means certain: He's counting on the drug industry to continue seeking chemistry services from full-priced Western companies, and he's betting that a hybrid drug discovery/service company is the right firm to provide them.

The DPI business that Galapagos just acquired, as it happens, is an example of a service provider that couldn't stay afloat amid growing competition from firms in lower cost countries such as India, China, and Russia. DPI lost business to such companies in recent years, and it was too weak to recover when Pfizer ended a large combinatorial chemistry library synthesis project in 2005.

Van de Stolpe argues that Western companies like DPI and Galapagos shouldn't be competing for straightforward chemistry projects such as compound library synthesis. "You've got to realize in your strategy that part of this business is taking place in low-cost countries," he says.

In a recent report to clients, Fortis' O'Keeffe wrote that DPI had trouble signing new deals because it couldn't provide a one-stop-shop service that spanned target discovery through clinical validation.

For the GSK contract, in contrast, van de Stolpe says Galapagos' two sides work together to provide both target and drug discovery with "real creativity and intelligent design." Moreover, the deal is structured so that GSK pays milestones for success, not chemists by the hour. "It's up to us to execute the program as efficiently as possible and at the lowest cost," van de Stolpe says.

Such execution could mean turning to companies in low-cost countries for certain tasks. In fact, Galapagos just struck an agreement under which two Indian firms, Indus Biosciences and ProCitius, will provide chemistry services to BioFocus DPI. Van de Stolpe says he can envision a day when Galapagos has its own laboratories in India.

As to whether Galapagos' hybrid business model is the right one, van de Stolpe knows that ArQule decided to exit the chemistry service business last fall to focus on drug discovery. But he points out that firms like Evotec OAI and Array BioPharma continue to operate successful hybrid businesses. Albany Molecular Research, the largest Western contract research provider, is edging toward hybridization with its own drug discovery program.

To van de Stolpe, the hybrid model provides enviable efficiencies. "We are a major customer of our own service unit," he says. "As a therapeutics company, this gives us flexibility in that we don't have to recruit all those people." Conversely, he adds, service division scientists can be put to work on internal projects during lulls between outside service contracts.

Critical to success, van de Stolpe says, is convincing customers that intellectual property won't leak from the service side of the business to the drug discovery side. Galapagos seeks to ensure this division with separate managers, separate laboratories, and stringent internal guidelines on information management. "You have to have very clear rules and be very strict about it," he says.

Synergies notwithstanding, the experience of Joseph C. Hogan, who cofounded ArQule in 1993 and ran it until 1999, is that it is tough to reconcile the tensions between the two sides of a hybrid business. "If you make money on services with the purpose of investing in drug discovery, then you aren't investing to help the customers of the service business," he says.

Hogan, who recently started a firm called Anthill Technologies that aims to change the way chemistry R&D is carried out, points out that history has not been kind to companies that offer services while engaging in their own drug discovery. "It's a challenging model, and I don't think anyone's pulled it off yet," he says.

Van de Stolpe, though, doesn't have posterity in mind; his goal is simply to reduce the risk of drug discovery by operating a complementary, revenue-producing business.

Indeed, if Galapagos can build up its own drug pipeline and strike more royalty-generating agreements like the one with GSK, he acknowledges that the service business might not fit anymore. "But until that time," van de Stolpe says, "I think that having a service business parallel to your internal development program is a perfect model."