Dow and BASF retain the top two spots, but the chemical businesses of three big oil companies edge DuPont out of the top five of C&EN's annual survey 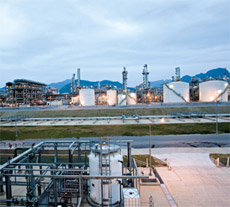 For five years, Dow Chemical, BASF, and DuPont have been in the top three of C&EN's survey of the global Top 50 chemical companies, although not always in that order. But this year's ranking contains a dramatic upset: Perennial third-place holder DuPont has been nudged out and pushed into the number six slot.

This year's ranking pulls together 50 companies whose combined worldwide sales in 2005 were $665.6 billion, based on financial reports for the year. That is an increase of 15% over the 2004 figure, at constant exchange rates. The sales cutoff for the Top 50 in this year's ranking is $5.4 billion, a 3% increase over the previous year's cutoff.

As in last year's ranking, sales of the world's major companies reflect the impact of rising oil prices and the attendant rise in petrochemical prices. Only six of the Top 50 showed a decline in sales, mainly because of divestitures.

This year's survey also points out that chemical industry profitability is continuing to increase, with an aggregate operating profit margin of 9.1%, up from 8.1% in last year's ranking. The new survey's profit margin is particularly healthy compared with that of two years ago, when a profit margin of 5.5% was the lowest point in the industry cycle.

The general rise in profit margin must be set against the fact that 14 companies showed a drop in operating profits. However, only two—BP and Ciba Specialty Chemicals—reported an actual operating loss; both companies have been involved in major restructuring projects.

This year's survey of the world's top chemical companies shows global business trends diverging from those in the U.S., as spotlighted in C&EN's U.S. Top 50 (C&EN, May 15, page 23). In that survey, changes in the ranking were due largely to the acquisition of a few large chemical producers by others.

Such engorged companies are, of course, part of this year's global ranking. One of the major examples is Lyondell Chemical, which was not even on last year's ranking but has catapulted into 12th position this year, following its December 2004 purchase of Millennium Chemicals. That buy integrated both Millennium and the Millennium-Lyondell joint venture, Equistar, into Houston-based Lyondell.

The other major example was Ineos, which has been on an acquisition binge over the past two years. Because it is privately held, the company reports no figures. But by manipulating sales numbers that Ineos revealed during its acquisition of BP's Innovene polymers unit, completed in December 2005, C&EN has estimated Ineos' 2005 sales at $12.4 billion—good enough to claim 17th slot, up from number 32 in last year's ranking.

As a counterpoint to the acquisitions, however, this year's global ranking features several spin-offs. Top of the list is Basell, formerly a 50-50 joint venture between Shell and BASF that specializes in polymers. By becoming an independent company last year, it hence qualifies to join this year's rankings along with its former parents.

Similarly, Lanxess, at number 28, became fully independent from Bayer last year. And number 36, the fertilizer maker Yara, continues to strengthen following its demerger from Norsk Hydro in 2004. Norsk Hydro is left with a small chemicals business and no longer qualifies for the survey on its own.

Alan Bigman, chief financial officer of Basell, explained at an investors' conference this spring that Basell was acquired by Access Industries on Aug. 1, 2005, for about $5.6 billion. Access, founded in 1986 by investor Len Blavatnik, retained the Basell management team to continue the company's strategy and vision, Bigman said.

"Basell is able to implement new strategies faster and more efficiently under its new structure," he said. It is especially nimble at moving into far-flung activities, including a joint venture in Saudi Arabia, a petrochemical complex in Kazakhstan, new polypropylene and polyethylene plants in Poland, and projects in Argentina, China, Australia, and the U.S.

Basell's activities reinforce the ever-intensifying global nature of the chemical industry. Curiously, though, firms in the traditional chemical-producing regions of the U.S., Europe, and Japan maintained their share of world chemical sales in this year's survey. That is true even though the companies, and the number of companies, in each region have changed. The C&EN ranking charts two years of sales and operating profits at 2005 currency exchange rates.

The largest chunk of sales was contributed by Europe, whose 22 companies, up from 21, had combined sales of $300.5 billion. That figure is up 15.6% from the previous year, but the Europeans' share of total world sales this year is 45.1%, only slightly changed from the 44.9% of the previous year.

Japan is the third historical source of chemical industry giants. It has eight companies in the ranking, the same number as last year, with combined 2005 sales of $86.9 billion, an increase of 12.8% over 2004. The Japanese firms made up 13.0% of global chemical sales in the survey, down just slightly from 13.3% the previous year.

Meanwhile, in contrast to the past few years in which companies in "other" geographic areas have earned an increasing share of the total, in this year's ranking, the percentage held by these companies was actually down a whisker, by 0.1%. Seven companies are included in this category, the same number—and firms—as in last year's ranking. Their combined sales in 2005, however, zoomed up by 14.8% over 2004.

As C&EN predicted last year, Equistar and Millennium Chemicals both dropped out of the ranking, consumed by Lyondell. However, the prediction that the new fertilizer company Mosaic would make its debut failed to come to pass, as its 2005 sales of $4.4 billion were almost $1 billion under this year's cutoff figure.

Next year's ranking, however, should show the inclusion of another spin-off, Arkema, which was demerged from Total in the spring. Total still has a sizable chemicals business, so it will remain part of the Top 50, although no longer in the top five or 10. Similarly, BP's place in next year's ranking will drop significantly following the sale of Innovene to Ineos.

Mixed Picture On Spending For The Future