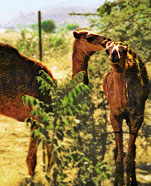 "We believe our test would be the first consumer test for caffeine and would be beneficial for anyone wishing to avoid caffeine for health or personal reasons," lead researcher Jack H. Ladenson says.

Caffeine typically is measured by chromatography or spectroscopy, methods limited to the lab setting. Assays that use caffeine-specific antibodies to detect caffeine are commercially available, but they can't tolerate the high temperatures of a cup of hot coffee.

The researchers worked around these technical issues by turning to camels and llamas, which are among the few creatures that produce heat-resistant antibodies. They immunized several animals with a caffeine-linked protein, then isolated caffeine-specific antibodies from the animals' blood and cloned the antibodies. The resulting assay works well in lab tests, and the team has a "very, very, rough preprototype device" that could lead to a dipstick test, notes coauthor Dan L. Crimmins.

Science has once again found answers to some of life's tough questions: Why is it so hard to lift a wet glass from a table? Why is it easier to lift the glass when there is whiskey instead of water between the glass and the table? David van der Spoel at Uppsala University, in Sweden, and his colleagues explain in a recent issue of Langmuir (2006, 22, 5666), the ACS journal devoted to research on colloids, surfaces, and interfaces.

Using molecular dynamics simulations, the researchers explored the effective force needed to pull apart two quartz plates (a.k.a. pieces of glass) separated at different distances by films of alcohol-water mixtures. They then computed the total work necessary to "lift the glass from the table." With water or a 10% methanol solution, there is a net entropy loss on separating the plates, but for higher alcohol concentrations there is a net entropy gain, they report. In other words, the surface tension is lower for alcohol than for water so the more alcohol in the mixture, the easier it is to lift the glass.

The researchers warn in the paper's conclusion that their results "may have severe social implications," as the energy required to lift a glass from a wet table is lowest for hard liquor. "Hence, intoxicated persons may be tempted to drink whiskey rather than water as it requires only half the effort to pick up the glass," they write. "The impact of this finding on alcohol consumption patterns falls beyond the scope of this work, however."

Human beings aren't perfect, God knows, and one of the more unusual imperfections is the inability of people to track more than three independent moving objects at any one time. But Johns Hopkins University psychologists, reporting in the July issue of Psychological Science, have figured out that color-coding the objects allows people to overcome this fault.

For example, athletic uniforms allow multiple players on a sports team to be visualized as a single set, the researchers explain. Their conclusions were based on a study in which students viewed a series of colored dots flashing onto a black computer screen and were asked to estimate the number of dots in randomly selected sets.

Knowing that color is the key "informs our understanding of the structure of visual cognition and reveals that humans rely on early visual features to attend large sets in parallel," notes Justin P. Halberda, one of the researchers. "We found that humans are unable to store information from more than three sets at once. This places an important constraint on how humans think about and interact with sets in the world."

The study provokes the idea that this "visual cognition" may explain the importance of sets of three in storytelling and religious themes, but not why there are inane top 10 lists.

This week's column was written by Steve Ritter. Please send comments and suggestions to newscripts@acs.org.

Share X
To send an e-mail to multiple recipients, separate e-mail addresses with a comma, semicolon, or both.
Title: Camelids help devise caffeine test, Whiskey versus water, Uniform uniforms
Author:
Chemical & Engineering News will not share your email address with any other person or company.