Scientists from Sydney to San Francisco have created an online research collaboration to develop cures for tropical diseases, using the "open source" programming model that produced freeware like Linux and Firefox, the award-winning Web browser.

The motivation is straightforward: Tropical diseases are low priority for big pharma because the return on drug development is so small. Patients in developing nations just don't have the financial ability to pay for patented drugs.

The structure is radical: Online discussions will prioritize a list of experiments that anyone can take on. Raw data will be posted online and discussed. Members of the consortium will solicit further ideas and expertise, hoping the greater research community steps up to the plate. The group, which operates under an umbrella website called Synaptic Leap, hopes that volunteered time, computer power, and reagents will eventually result in a portfolio of drug leads that will be made freely available for development. Currently, members of Synaptic Leap are describing projects online and asking others for help and advice.

Participants in open-source collaborations give up their ability to patent discoveries by definition, because their data are public as soon as they are posted. But some argue that when it comes to neglected diseases, there's nothing to lose, because there was never any income to gain.

"The potential for profit drives both research investment and secrecy," says Synaptic Leap founder Ginger Taylor. "As such there is no greater need or opportunity for open collaborative research than in tropical diseases."

Proponents say open-source science could provide a pipeline for nonprofit pharmaceutical companies like the Institute for OneWorld Health. They say it will be a great way to accelerate science, because online discussions permit instant feedback on ideas and data. They point out that it will give the greater scientific community a chance to learn about experimental failures, a body of work lost in the standard publication process.

But therein lies the challenge. If the group publishes raw data online in the pursuit of virtuous science, does this negate the ability to publish in a peer-reviewed journal? Will scientists put their raw data, and possibly their reputations, online? These and other issues were raised by University of Sydney chemist Matthew H. Todd and his Synaptic Leap colleagues in a recent essay entitled "Open-Source Research-The Power of Us" (Aust. J. Chem. 2006, 59, 291).

Synaptic Leap was launched in November 2005 and is currently growing by about five users a week. Of the growing user base, about one new scientist per month is active on the website, Taylor says. Currently, members are working on developing plans to address malaria, in collaboration with the Tropical Disease Initiative, and schistosomiasis, in a project led by Todd. There is an open invitation for scientists to spearhead projects in other neglected diseases. "The real experiment is to see if the open-source idea will work in basic research," Todd says. "It's got so much potential."

Todd was on his honeymoon relaxing when the idea of using the Internet to facilitate collaborative science first occurred to him. He thought it would be a great way to collaborate on a chemistry project. "You could post results and discuss informally with a network of researchers without getting bogged down in a sea of e-mails."

He was mulling over a disease most Westerners have never faced: schistosomiasis, which is passed on by a worm that penetrates the skin of people wading in fresh water. It affects 200 million people worldwide, mostly in the developing world.

In particular, Todd was concerned the worm could develop resistance against praziquantel, the only available drug for treating schistosomiasis. The problem is that praziquantel is not enantiopure. With millions of people consuming it daily, resistance is an eventuality, but it could be delayed by treating patients with the active enantiomer, Todd says. "You can increase the dose of what is already a pretty large pill and get over the problem of the current dose being subcurative, which favors the development of resistant survivors−potentially a disastrous situation given there are no backup drugs for schisto." 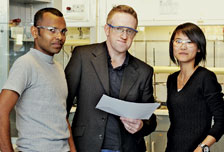 The challenge is to produce the active enantiomer for less than the cost of the racemic drug, which is currently sold for 7 cents per 600-mg tablet. Even though Todd had developed a simple synthesis for praziquantel, the thought of beating the industrial price was daunting. "I thought to myself, 'I can never do that on my own,' " he says. "And so the natural place to turn was to everybody else." That's when he found and joined Synaptic Leap.

Todd says optimizing synthetic methodology to make enantiopure substances benefits from the presence of many voices. "When most chemists have a problem, they walk down the corridor and have a chat with a colleague. Open source is just scaling this up and doing it over wider distances."

Todd allows that scientists working on a pride-and-joy project that has commercial potential are probably not going to want to try the open-source system. But he says some science, like synthesis optimization, where the total-synthesis goalpost has already been passed, is the perfect venue for open-source science. "If the compound has already been made, then the race is won, so there's less competition."

Open-source science can also find a niche in informatics-related fields, where a lot of computer time is required. Indeed, the malaria side of Synaptic Leap is currently focused on summarizing all the information known about the malaria genome to rank targets for drug development.

The informatics side is also where industry scientists might potentially get involved. Drug companies have in-house algorithms that can do sophisticated genome analyses, predicting, for example, whether a given small molecule would make a good drug lead. Industry scientists could volunteer their time to use these algorithms to look at the promise of molecules being examined in the open-source experiments. The results could be passed along without giving up the proprietary algorithm. Indeed, a major multinational pharmaceutical company is considering contributing to open-source efforts for neglected diseases in this way. The arrangement is still under discussion.

Just as companies have concerns about maintaining proprietary information, many researchers balk at the idea of making data available for others to see and comment on prior to publication. But not Jean-Claude Bradley.

Last summer the Drexel University chemist began two simultaneous experiments in his lab. The first: to synthesize potential inhibitors for the malarial enzyme enoyl reductase, which the malaria parasite uses to produce essential fatty acids. The second: to post online all raw data that his five students produce (usefulchem.wikispaces.com).

He's also recently joined Synaptic Leap. "There's not a lot of people doing this now, but I think open source is going to become an important way to do science," Bradley says.

He says people posting to his blog have helped improve experimental conditions. "We had one posting that suggested a different concentration, improving the reaction."

When it comes to the issue of publishing, Bradley argues that open-source discussions are similar to conferences, where people openly discuss unpublished research and do not fear being denied the right to publish in a journal, assuming the science is good.

Todd says the biggest misconception is that proponents of open source are antagonists of peer review. "I think the value of peer review is clear, and I would want to publish whatever work came out of the open-source research. The question is whether the journals will allow it."

Ideological components of Synaptic Leap have been slowly percolating through scientific circles. For example, researchers around the world have long shared information publicly, from the gene sequences deposited in GenBank to the Table of Isotopes, where physicists share nuclear structure and decay information. With the development of online software, large research labs across the country are starting to use internal blogs as a way to coordinate group projects. The group Chemists Without Borders has recently been created to "help better the world through chemistry," from affordable drugs to sustainable technology.

Synaptic Leap aims to be a platform that brings all these elements together into an online, public, conscientious forum to conduct collaborative science. Taylor, a veteran of the intranet software business, wants Synaptic Leap to become the hub for open-source research of all neglected diseases.

The forum as it exists now was developed with open-source Web software and a shoestring budget of volunteers. Taylor is busy writing grants to develop specialized software that currently does not exist in the public domain to help foster discussion about research priorities and data-data that some proponents view as a means for scientists to express social responsibility.

"When people think about helping the developing world, they mostly think about petitioning Congress or other conventional routes of expressing dissatisfaction," says Stephen M. Maurer , policy professor at the University of California, Berkeley. "But scientists are knowledge workers. They have skills that could make a big difference in solving these problems. Open-source science will let them contribute directly."

Although they are in the public domain, inventions resulting from open-source collaborations can have some licensing rules associated with their usage, making the inventions "not-quite patented and not-quite open," says Stephen M. Maurer of the Goldman School of Public Policy at the University of California, Berkeley.

Copying and distributing text describing open-source inventions fall under copyright rules. In open-source software, General Public Licenses, or "viral licenses," are common. Anyone can use the software, but if it is used or extended to make a new program, that new program is considered "infected" and must be shared.

Synaptic Leap, an open-source research forum focused on neglected diseases, is opting for a Creative Commons Attribution 2.5 License, which allows people to "distribute, copy, make derivative works, and even use it commercially as long as proper attribution is given," says Ginger Taylor, founder of Synaptic Leap. If someone wants a different copyright license for a posting, it would just have to be indicated with the posted text.

Inventions placed in the public domain in general can't be patented. According to Synaptic Leap's blog, researchers who really want to patent some of their work could opt to post only parts of their data online, thus holding back sufficient information for a patent.