Scholars strive to meld alchemy into the traditional scientific narrative

PORTRAYAL
[+]Enlarge
Credit: WILL BROWN/CHEMICAL HERITAGE FOUNDATION
The Alchemist in His Workshop was painted by David Teniers in the 17th century. 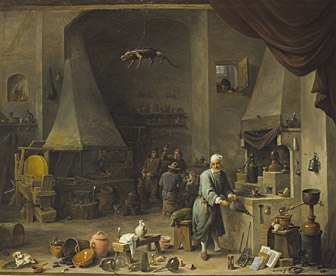 Credit: WILL BROWN/CHEMICAL HERITAGE FOUNDATION
The Alchemist in His Workshop was painted by David Teniers in the 17th century.

To most people, the word "alchemist" conjures an image of a dank, medieval laboratory with a bearded initiate pursuing the futile, magical ambition to convert lead into gold. But not to those at the International Conference on the History of Alchemy & Chymistry, which took place last week at the Chemical Heritage Foundation in Philadelphia. To the diverse group of scholars who shared their latest historical discoveries about alchemy and early chemistry, that stereotype is dead wrong. They want it to give way like a disproved scientific theory.

It wasn???t so long ago that those who study the history of alchemy had to apologize for their intellectual pursuits, even to departmental colleagues, commiserated Johns Hopkins University historian of science Lawrence ??M. Principe. The last major international gathering of historians of alchemy and early chemistry was in Groningen, the Netherlands, 17 years ago. Since then, the field "has become mainstream," Principe proclaimed to the 100 or so conferees who had gathered from four continents.

Indiana University historian of science William R. Newman agreed that the field is opening up, but he said it's still dogged by earlier scholars who painted alchemy as "an obscurantist impediment to scientific progress." Early scholars saw alchemists as deluded fanatics engaged in impossible pursuits, as opposed to bona fide scientific pursuers of truth, Newman said. But the traditional demarcation between prescientific alchemy and modern science is now indefensible, he said.

An example that Newman and Principe have detailed centers on the mid-17th-century American alchemist George Starkey, who they find pivotally influenced the rigorous laboratory practices and chemical theorizing of the early English chemist Robert Boyle.

Credit: COURTESY OF MARCOS MARTINÓN-TORRES
Hessian crucibles were best at taking the heat of alchemists' fires.

At the meeting, Newman outlined his re-analysis of the Isaac Newton manuscript designated Dibner 1031B, known usually by the title "Of Natures Obvious Laws & Processes in Vegetation." Written backward and upside down on two manuscript pages are previously untranslated Latin passages. These amount to a listlike account of Newton's elaboration of the then-popular "sal nitrum theory of metallic generation," in which metals form in the earth via interactions between rising sulfurous vapors and downward-going, salty, vitriolic waters.

Most telling, according to Newman, are the final lines of the Latin text. Here, Newton hints of an expansive theory in which metal-generating vapors "wander all over the earth and bestow life on animals and vegetables. And they make stones, salts, and so forth." These lines provide rare clues to Newton's pursuit of a "theory of everything" and suggest why this icon of the scientific revolution spent his last three decades pursuing alchemical investigations, Newman said.

Others at the meeting revealed alchemists' sometimes pervasive presence in the courts of kings, the "secrets" behind the materials in coveted Hessian crucibles that could stand up to the demanding conditions of both the alchemists' and mining assayers' laboratory conditions, and the meanings of alchemists' allegorical and metaphoric words and images.

The collective question of the meeting's participants was this: What if the astronomy- and physics-centric narrative of the scientific revolution were rewritten to include "chymistry," a term introduced a decade ago to emphasize the continuity of alchemy and early chemistry? With that transmutation of the traditional story of science's ascent on their to-do lists, an energized group of chymistry scholars dispersed last Saturday.