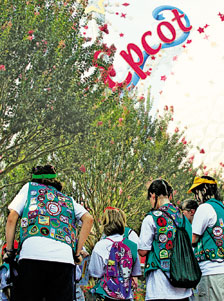 Two years ago, a group of junior Girl Scouts from Delaware, Ohio, started selling cookies to earn enough money to take a trip to Disney World. That was about the same time that James Kessler of the American Chemical Society Education Division began developing a curriculum for a hands-on program at Disney's Epcot called "Everyday Chemistry." The Girl Scouts enjoyed that program during their visit to Orlando, Fla., in late June.

"Everyday Chemistry" is the latest offering from the Disney Institute's Youth Education Series (YES), which uses park facilities for educational programs in various natural and physical sciences and arts and culture. ACS and Disney brainstormed how to collaborate under several different kinds of educational frameworks before deciding to pursue this program.

The idea behind the program is to show kids how chemistry is all around them, Kessler says. He targeted this three-hour program for students in grades four through nine and based it around three of Epcot's exhibit venues. During the visit, a group leader connects ideas that students may not put together on their own, Kessler tells C&EN. In this program, the students also observe some demonstrations, participate in hands-on activities, and have time for questions. Collaborators Tina Dawson and Michael Morgan of the Disney Institute helped Kessler refine his ideas to fit the park's logistics.

Nonschool organizations, such as the Girl Scouts, often participate in the summer, but most Disney YES visits take place during the school year, and teachers try to work the trips into their curriculum, says Christine DeMichael, marketing manager for Disney's Youth Group Programs. "Everyday Chemistry" is aligned with national education standards, and visits are usually scheduled through school systems. 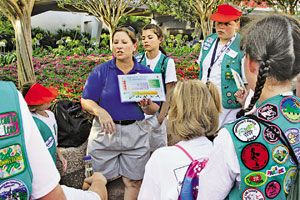 Disney employees volunteer to train as Disney YES group leaders. Kim Tum Suden has a bachelor's degree in chemistry from Virginia Polytechnic Institute & State University, Blacksburg, and has worked in Disney's safety department as an industrial hygienist for 16 years. She says she was thrilled to work with the Ohio Girl Scouts because she "loves" the chemistry program, and she leads her daughter's scout troop.

Tum Suden, a woman whose enthusiasm would not be dampened even by the heavy humidity of central Florida, meets with 12 students and their chaperones first thing in the morning on June 27 at Epcot. Once inside the gates, she introduces them to carbon, hydrogen, and oxygen and points out their locations on the periodic table that she pulled from her backpack. The girls (ages 11-13) also discover how the elements repeatedly appear in chemical formulas of familiar items she shows them, such as sugar, vinegar, and carbonated water.

The girls then learn how chemistry and energy are inextricably linked in nature. Tum Suden talks about photosynthesis. Inside an Epcot exhibit called the "Universe of Energy," the group follows a multimedia presentation. Over the course of 45 minutes, comedienne Ellen DeGeneres has a nightmare that she is on the game show "Jeopardy!" with her former college-roommate-turned-energy-professor (played by Jamie Lee Curtis), and Ellen can't answer the multitude of energy-related questions. So Bill Nye the Science Guy teaches her about energy.

In a film, Ellen travels with Bill through prehistoric time to learn that fossil fuels are derived from photosynthetic plants. Then the audience literally follows Ellen and Bill when the seats break apart into huge cars that slowly slide forward, the walls open up, and the audience passes through a theater of moving dinosaurs, plants, and moist air. During a second film, Ellen gathers that fossil fuels are limited resources and learns about alternative forms of energy, such as wind, hydroelectric, clean-coal technologies, and natural gas. She also returns to the game show and wins. The final "Jeopardy!" answer: One source of power that will never run out. Ellen nails the question: What is brain power?

Standing in the sunshine outside the exhibit, Tum Suden and the Girl Scouts follow up with how energy affects their brains and lives. She defines calories as the units for measuring energy; for example, the energy stored in what they had for breakfast. Then she encourages them to use up some energy by wiggling around.

Just before the group enters the second exhibit called "Innoventions," Tum Suden transitions from nature's chemistry to how chemists use brain power to adapt certain materials into new things. She pulls molecular modeling pieces from her backpack. Together, the group uses the pieces to build a polymer chain. They form polymer material by mixing borax and glue in little cups, too. Finally, Tum Suden gives them some examples of natural and synthetic polymers before the group heads into a loud, vividly colored, and futuristic exhibit building.

The girls zero in on the Fantastic Plastics Works. They listen to a speaker talk about recycling petroleum-based plastics and how the same plastic material can be used in various items of everyday living such as detergent bottles and exhaust manifolds in cars. The girls also take the Fantastic Plastic Challenge: Paired up at computers, they design robots on-screen to meet certain criteria. For example, they have to pick between materials of varying weight and durability, and then those robots "race" on a wall screen. Meanwhile, nearby machines mold generic, snap-together pieces and drop them into bins. Everyone assembles those pieces into their own take-home robots. Tum Suden calls the students' attention to an overhead display ranging from fire hoses and hard hats to chairs and sports equipment-all made of plastic-before leaving the building.

Outside, she explains to the girls that chemists designing those materials in the display, which contain carbon, hydrogen, and oxygen, for various applications have some of the same considerations that the Girl Scouts used in designing their on-screen robots. She also notes that when chemists design things for a certain application, their experiments may not yield exactly what they want. But all is not lost, she says. For example, some chemists who set out to make a superstrong adhesive got very weak material. Later, that weak adhesive was used to make the sticky notes found on many desks and kitchen cabinets.

SMILE
[+]Enlarge
Credit: Rachel Petkewich/C&EN
Seven of the nine Girl Scouts in Troop 2080 who earned the Bronze Award-the highest achievement award for Junior Girl Scouts-pose with an Epcot ambassador from China. They earned the award by hosting World Thinking Day and becoming experts on 11 of the 12 countries in Epcot's showcase that have Girl Scouts organizations. 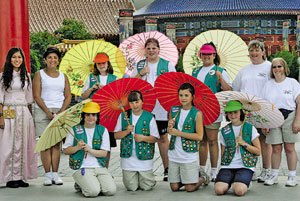 Credit: Rachel Petkewich/C&EN
Seven of the nine Girl Scouts in Troop 2080 who earned the Bronze Award-the highest achievement award for Junior Girl Scouts-pose with an Epcot ambassador from China. They earned the award by hosting World Thinking Day and becoming experts on 11 of the 12 countries in Epcot's showcase that have Girl Scouts organizations.

Tum Suden then leads the girls to a shady grass area outside for an experiment that further illustrates how the physical properties of polymers may be more than meets the eye. For example, she asks them to design a raincoat for a Minnie Mouse figurine stowed in her backpack. Should they use a shiny, thin film of polyvinyl alcohol or dull, self-sealing sandwich plastic wrap? The girls are a little surprised to find that the film dissolves in water. Why does that plastic dissolve? It's made from corn, a renewable material. Like petroleum, she explains, corn is composed of carbon, hydrogen, and oxygen. Those elements can be manipulated to form biodegradable plastic.

The third and final Epcot venue that ties together the ideas of energy and plastics in "Everyday Chemistry" is Test Track, a simulator for various driving conditions. Students take a ride and then discuss the research that chemists do on new, non-petroleum-based materials for car parts and alternative fuels that reduce dependence on fossil fuels before a car even gets to this test phase. The Girl Scouts miss this part of the program because they had a scheduling conflict.

Troop leader Leigh Hurley says the girls chose "Everyday Chemistry" over several Disney YES program options. After experiencing the program, she will recommend it highly to other troop leaders. Hurley knows the girls liked the program because "they're tired from traveling, but they're quiet and still paying attention," she says. What were the girls' favorite parts of the program? Mixing their own polymers, designing robots on computers, and assembling robots, they say.

Pollution
Satellites can now see air pollution inequality within cities
Persistent Pollutants
Goodbye to some PFAS in food packaging
Pollution
Mercury makes it deep into marine trenches
Share X
To send an e-mail to multiple recipients, separate e-mail addresses with a comma, semicolon, or both.
Title: 'Everyday Chemistry' at Epcot
Author: Rachel Petkewich
Chemical & Engineering News will not share your email address with any other person or company.