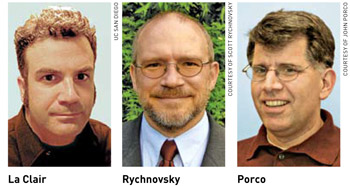 It's unlikely that the late natural products chemist Udo Gräfe knew what a fracas he was stirring up when he collected a bit of fungus growing on some dead wood in Siberia. The structure of a metabolite isolated from cultures of that fungus—the antiproliferative compound hexacyclinol—has become a controversial topic among organic chemists in recent months.

Scott D. Rychnovsky, a natural products chemist at the University of California, Irvine, was struck by the highly strained endoperoxide structure proposed by Gräfe and reportedly synthesized by La Clair. He decided to simulate the compound's 13C nuclear magnetic resonance (NMR) spectrum to see if the computation deviated from Gräfe's data.

"I came to the conclusion that the original structure assignment doesn't fit the data," Rychnovsky says. Using the same computational method, he proposed a revised structure of hexacyclinol based on panepophenanthrin, another compound isolated from a different strain of the parent fungus (Org. Lett. 2006, 8, 2895).

Rumblings over the disparity between La Clair's and Rychnovsky's work grew louder this week when a group led by Boston University's John A. Porco Jr. synthesized the revised structure of hexacyclinol (Angew. Chem. Int. Ed., DOI: 10.1002/anie.200602854). As described by Porco's team, the 1H NMR spectrum of the newly synthesized revised compound is identical to that of Gräfe's isolated compound. And a crystal structure of Porco's compound matches the framework proposed by Rychnovsky.

The results raise an interesting question: How can compounds with structural skeletons as different as those synthesized by La Clair and Porco have such similar 1H NMR spectra?

La Clair attributes the similarity to the fact that the two molecules are structural isomers. He tells C&EN that although the compounds have different structures, their protons are in similar chemical environments. He thinks it's possible they could have very similar 1H NMR spectra. "There are a number of cases in the literature where you can't tell the difference between complex structural isomers by 1H NMR," he says.

La Clair adds that he can't directly compare the two compounds' 13C NMR spectra, where differences are likely to be more apparent, because he and Gräfe used different solvents for the analysis. La Clair plans to repeat the work and hopes to publish more spectral data.

The controversy has been hashed over online in several chemistry blogs, where La Clair has taken a thrashing. In particular, critics have chastised him for not including the names of five technicians who assisted him as coauthors on the paper.

"I didn't mean to offend anybody by doing that," La Clair responds. "If the editors or reviewers had told me that was unethical, I wouldn't have done it."

Despite the brouhaha, La Clair praises Porco's and Rychnovsky's reports and says the work is helping to elucidate the chemistry of these metabolites.