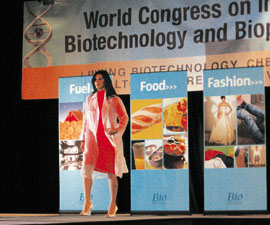 Most speakers at the session-packed four-day conference agreed, but they lamented the one force of commercial nature missing from the storm: economic viability.

Biotech fuels and materials still account for only a small fraction of the markets in which they compete. Technologies discussed at the conference are immature in many cases, and the cost and performance benefits necessary for commercial acceptance—or even initial investment by big companies—are years if not decades away. Still, industrial biotechnology, frequently called "white" biotechnology to distinguish it from "red" pharmaceutical and "green" agricultural biotechnology, is making measurable progress.

Attendance at the conference topped 1,100 this year, up from 750 in 2005. This rise reflects an increased interest in the sector, fostered in part by urgency regarding biotech fuels in President George W. Bush's State of the Union address earlier this year. Asserting that "America is addicted to oil," Bush announced a target of reducing oil imports from the Middle East by at least 75% over the next 20 years.

The President proposed $150 million for research into new methods of making ethanol "not just from corn, but from wood chips, stalks, or switch grass," with the goal of making biomass-based ethanol "practical and competitive" within six years. The Bush Administration has also set a goal of replacing 30% of U.S. gasoline consumption, about 60 billion gal of fuel, with ethanol by 2030.

Meeting these goals is a matter of more than technology development. It will also involve big changes in agricultural production. Thomas C. Dorr, undersecretary for rural development at the Department of Agriculture, told attendees that the department is committed to the development of biomass-based fuel production. "It's a transition at USDA from calories to Btu," he said, and from oil supplied by the Middle East to biomass supplied by U.S. farmers.

Jens Riese, a partner with McKinsey & Co., unveiled a new report in which the consulting firm forecasts that biotechnology will account for 10%, or $158 billion, of combined world chemicals and fuels sales by 2010. Currently, industrial biotechnology-including products made from agricultural feedstocks or through fermentation or enzymatic conversion-accounts for 7% of sales and $97 billion in value within the two sectors.

By 2012, biotech fuels will grow to 4% of sales in the energy sector alone, up from 2% today, Riese said. He noted, however, that McKinsey's forecast depends on continued high oil prices and government subsidies for alternative fuel production in most markets. In the U.S., for example, oil needs to be $30 per barrel with subsidies and $50 without subsidies for corn ethanol to be competitive with gasoline. In Germany, the oil price would need to range from $80 to $90 per bbl without subsidies.

Several speakers, including Riese, emphasized the need to develop a diverse range of feedstocks that are cheaper and more abundant than corn, which is currently the dominant feedstock for U.S. ethanol production. Most pointed to the importance of developing cellulosic feedstocks such as switch grass and corn stover.

Chris Schroeder, a partner at Centrec Consulting, said in a presentation on biodiesel feedstocks that supply and demand pressures will limit the economic viability of corn, soybeans, canola, and other plant and animal oils that are already used for other purposes. Prices will increase significantly, and feedstock availability will become a serious problem. "Hopefully, cellulosic feedstocks will come on-line before we reach that point," Schroeder said.

The cost of energy needed to operate biofuel facilities is another important consideration. Robert C. Brown, director of Iowa State University's biorenewables program, said natural gas costs for an ethanol plant can reach $12 per million Btu of ethanol, compared with $2.50 per million Btu just a few years ago. The grain-ethanol process, he added, is only 38% energy efficient, whereas gasoline production is 84% efficient. "It's hoped that advanced technology can take ethanol to 80%," Brown said. "More realistically, it can get to 50-60%."

Justin Adams, director of long-term technology strategy at BP, stressed the importance of innovation in developing a biofuels business. The focus must be on the development of low-cost, abundant feedstock materials, he said. Citing a recent report by USDA and the Department of Energy on the feasibility of producing a billion tons of biomass feedstock, Adams posited that the development of cellulosic material is "the only route to sustainability."

The problem, he said, is that biofuels cannot yet be economically produced from lignocellulosic feedstocks. "Many things need to come together to drive cost down," he said. "We are not investing in production plants right now because science still needs to be done." Investing too early could set back the development of alternative feedstocks, Adams cautioned, invoking the hype and subsequent disappointment over hydrogen fuels since 2000.

Earlier this year, BP announced it would invest $500 million over the next decade in its new Energy Biosciences Institute, which Adams said is working on developing cost-competitive alternative feedstock technologies for transportation fuel.

"There is no exit, no way of getting your money back from white biotechnology," Austin said. "There are no Amgens or Biogens. We lack a bellwether to show that it's a safe investment."

The standard approach of presenting investors with a new technology doesn't work in an industry that is not well-established, he added. "You have to be extremely careful of people in love with their science. Investors don't care about science. Their job is to make money, and mine is to make money for investors, not to invest in new industries."

Austin said he hopes to build a model for investing in projects rather than products or companies-a model in which start-up white-biotech firms pursue partnerships and licensing deals involving milestone payments and plans for eventual scale-up and commercialization. Companies in the sector can learn from collaborations in the drug and biotech sectors, he said. "You can keep control and innovate in partnerships."

Although commercial application will be deferred for many of the technologies discussed at the conference, materials representing the first wave of industrial biotech were in the spotlight at a luncheon fashion show featuring gowns made of biomass-based materials. And several conference session speakers described some early successes. Eric Seewald, communications manager at Bayer CropScience in Canada, discussed the firm's production of vernolic acid from plant oils rather than through traditional chemical synthesis. He notes, however, that commercialization of new chemicals can take up to five years.

Many of the attendees at the conference were academic researchers, but representatives from major chemical companies were there to scout opportunities. Archie Kerr, director of sustainability at Lanxess in Sarnia, Ontario, said the firm is committed to shifting a significant portion of its production to alternative feedstocks. "We are driving to reposition ourselves as the most sustainable chemical company," he said. "We are at the beginning of that process."