ON THE AIR
[+]Enlarge
Credit: Aaron Thompson
MacDougall voices his "Chemical Eye" column in the NPR radio booth on Thursday, a day before the piece airs. 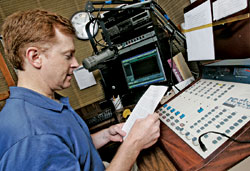 Credit: Aaron Thompson
MacDougall voices his "Chemical Eye" column in the NPR radio booth on Thursday, a day before the piece airs.

If you're curious about what the "Star Wars" movies, the Jefferson Memorial, and stem cells have in common, try tuning in to Preston MacDougall's radio commentary. He's a chemistry professor at Middle Tennessee State University with a weekly gig on the Murfreesboro/Nashville National Public Radio station, WMOT.

For the past two years, MacDougall's given a chemical interpretation of everything from firecrackers to immigration policy by means of a Friday science column called "Chemical Eye." The columns fill five minutes of airtime, the length of a typical current affairs feature, and they are broadcast twice on Fridays during rush hour.

His Scottish ancestry evidenced by a thrush of red hair and an energetic wit, MacDougall also occasionally peppers his columns with topics close to his Canadian heart, such as hockey. Fear not, he slips some science in, too: namely, the hockey-stick-shaped increase in global temperature predicted by climate-change simulations.

In fact, MacDougall's hallmark is bringing up topics that appear to be completely unrelated, then weaving them together with a dose of science and humor.

"I like novels when the author surprises you with something completely out of the blue. I think humans like surprises, and most people don't want to hear five minutes of straight chemistry," MacDougall explains. "So I put in an order for my brain to find something to connect. It's sort of like a bingo machine; the ideas just pop out. And sometimes what comes out works."

MacDougall gets his ideas from a myriad of sources. A Nature paper. A conversation with a Chinese scientist in Beijing. A recent column was inspired by a visit to Washington, D.C.'s Holocaust Museum, and it featured two chemists who helped the resistance movement in Nazi Germany. The columns take a few hours to write, MacDougall says. "Any longer and I feel I'm not using my time wisely."

It all began when MacDougall wrote a short essay about the 2004 presidential election. In the opinion piece, he connected each candidate's initial to the corresponding element on the periodic table and likened the candidate's potential to those elements' characteristics. "I tried getting it published at the New Yorker. Then I tried the Atlantic Monthly. I tried all these magazines, which I later learned were near impossible to get published in."

That's when it occurred to him to try something a little closer to home. MacDougall had been phoning the local NPR affiliate with public service announcements about upcoming scientific lectures and events. He showed his essay to a news director there, who agreed to let MacDougall air the piece instead of publish it. 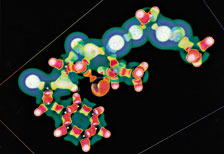 "After I did my commentary, they asked if I wanted to do this on a regular basis," MacDougall recalls. "Apparently they had been looking for a regular scientific commentator.

"At first I thought, 'I can't do this; I'm not a writer,' " MacDougall says. "Then I thought, 'What the heck?' " The radio transcripts are now posted online, and several newspapers have also published them in their commentary sections. A compendium of his columns can be found at www.sitnews.us/MacDougall/062206_macdougall.html.

"The greatest thing about being a scientist is when you make a discovery, when you recognize something about the world that nobody else knows or has ever observed. It's a total rush," MacDougall says. "With the radio commentaries, I don't get quite the same rush, but I definitely get a thrill when I write something I think is good."

MacDougall's advice for others who might want to do the same is to get involved in the local community and to take whatever opportunities come your way. "It can be hard to get published. You have to be able to accept rejection. But scientists have learned how to accept rejection if they've ever tried publishing a research paper."

MacDougall also thinks scientists, and especially chemists, have a responsibility to reach out to the public. "Everyone knows the public perception of chemistry is at an all-time low. It's up to chemists to do something about that.

"Although many of the environmental problems are chemical in nature, the only way you are going to solve those problems is through chemistry. We need to recruit bright students to solve these problems," MacDougall argues.

He also believes it's important for scientists to reach out to voters. "People may be choosing a political candidate who, for example, sounds like they are helping the environment, but whose policies are counterproductive. We need to encourage the public to seek further information. And we need to be good at communicating chemistry to a broad range of people."

Communicating chemistry is something MacDougall takes to heart in his research, too. He's a theoretical chemist and works to develop software to visualize electron-cloud probabilities around molecules, an effort that clarifies an otherwise murky subject for other researchers. Maybe that's why he's also adept at helping the public visualize science through his colorful radio commentaries.

Education
New international students cannot enter US for online-only programs
Education
Chemistry-style fun and games
Undergraduate Education
Block plan compresses one class into a few weeks for deeper learning
Share X
To send an e-mail to multiple recipients, separate e-mail addresses with a comma, semicolon, or both.
Title: Preston MacDougall
Author: Sarah Everts
Chemical & Engineering News will not share your email address with any other person or company.