Quadruplex In Its Element 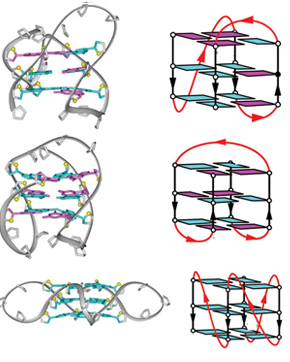 Like the aglets at the end of your shoelaces, protein-and-DNA assemblies known as telomeres protect the ends of your chromosomes from fraying. In work with potential implications for the development of anticancer therapeutics, the folding pattern of DNA quadruplexes formed by human telomeres in a medium closely resembling the cellular environment now has been found by three groups. Two of the groups have also succeeded in obtaining the first three-dimensional solution structures of a human telomeric quadruplex in the same cell-like media.

The single-stranded telomere terminus can adopt the shape of a quadruplex, a folded conformation formed by some guanine-rich DNA repeat sequences. The 3-D structure adopted by human telomeric quadruplexes is of particular interest for anticancer drug discovery efforts, as drugs are being designed to interact with such structures to inhibit telomere extension, a process that occurs selectively in cancer cells.

Various groups have obtained 3-D human telomeric quadruplex structures. For example, structural biologist Dinshaw J. Patel of Memorial Sloan-Kettering Cancer Center and coworkers obtained the nuclear magnetic resonance spectroscopy structure of human telomeric quadruplexes in Na+-containing solution in 1993. And a group led by professor Stephen Neidle of the School of Pharmacy at the University of London obtained X-ray structures of human quadruplexes in a K+-containing crystal in 2002.

K+ solution is considered more biologically relevant than Na+ solution because K+ predominates in cells. A structure in K+ solution has been especially sought, because a crystal structure may not always accurately reflect the conformations that molecules adopt in living cells. The structure of the human quadruplex in K+ solution, however, has resisted analysis.

Now three groups have determined the folding pattern, or topology, of the human telomeric quadruplex: chemistry professor Hiroshi Sugiyama and coworkers at Kyoto University, in Japan, by circular dichroism spectroscopy (Bioorg. Med. Chem. 2006, 14, 5584); assistant professor of pharmacology and toxicology Danzhou Yang of the University of Arizona and coworkers, by NMR (Nucleic Acids Res. 2006, 34, 2723); and Patel, senior research scientist Anh Tuân Phan, and coworkers, also by NMR (J. Am. Chem. Soc., DOI: 10.1021/ja062791w). The overall folding pattern revealed in the three models is a novel one that had not been seen before in human telomeric quadruplexes.

In the JACS paper, Patel's group also reports having obtained a more detailed 3-D K+-solution structure of the quadruplex by making minor substitutions in the human telomeric DNA sequence, rendering the structure NMR-interpretable for the first time. In a yet-to-be-published study, Yang and coworkers have also determined a 3-D NMR structure of another slightly modified telomere sequence in K+ solution.

Although structures of unmodified native sequences would have been more desirable, the new structures provide about as close an approximation to the fully human structure as can currently be achieved. Different quadruplex structures are believed to be in equilibrium at telomere ends, so the structures obtained so far are probably not the "end" of the story in any case. "Our future efforts will be directed toward deciphering the folding topologies of other quadruplex conformations that are formed by human telomere sequences in K+ solution," note Patel, Phan, and coworkers in their paper.

The new NMR solution structures share some features with the Na+-solution and K+-containing-crystal structures determined earlier, but they also differ from them substantially in key ways. Researchers will no doubt be carefully studying the features of these structures as targets for anticancer drug discovery.

The work is a major step toward the goal of better understanding the structure of human telomeres. The three groups "concur in finding an important new category of fold for this structure, with two lateral loops and one propeller loop, although it is not clear to what extent it is the dominant species in solution," Neidle comments. "There is still much to learn about these complex molecules, and we all agree that more high-resolution structure analyses will continue to be important as the best way of obtaining topological information."