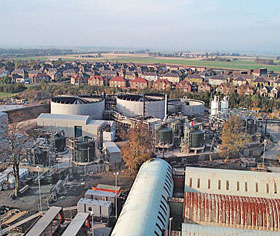 For Scotland's chemical and life sciences industries, the challenges are straightforward: Create companies that can turn the country's research into profits, and create jobs to cut a high unemployment rate. Scottish Enterprise, the main economic development agency for the country, is trying several approaches to meet those challenges.

Work started earlier this month on a $90 million manufacturing park in Grangemouth, Scotland, roughly midway between Edinburgh and Glasgow. The new site, Earls Gate Park, is a joint development between the Forth Valley unit of Scottish Enterprise and Finnish fine chemicals producer KemFine. It will provide accommodation for up to 20 chemical, technology, and manufacturing companies.

KemFine gained a 160-acre site in Grangemouth in September 2005 when it acquired Avecia Fine Chemicals. The new chemical park is being established on 30 acres carved out of that site. Tenants will have access to utilities such as KemFine's effluent treatment plant and heat/power station, as well as access to roads, rail, and sea.

Scottish Enterprise is counting on the investment to help safeguard the 650 existing jobs at the companies now operating on KemFine's Grangemouth site. But Scottish authorities are particularly pleased with predictions that the park also has the potential to create up to 950 new jobs. Investment plans for two potential projects are already in progress, they say.

Stuart Ogg, acting chief executive of the Forth Valley unit, points out that Grangemouth was identified as a key location in the Scottish Enterprise Strategic Investment Plan and "has long been seen as the hub of Scotland's chemical industry. We hope this site encourages more investment from businesses operating in the sector."

The investment in plants and property is the latest by Scottish Enterprise to encourage development in the chemical industry. But for research-based industries that might be considered more cutting-edge, the agency has an aggressive plan to facilitate the formation of start-up companies.

Three intermediary technology institutes, or ITIs, have been established for life sciences, digital media and communications, and energy-all areas of strength in Scotland, according to Rebecca Trengove, marketing manager for ITI Life Sciences, based in Dundee. The agency has budgeted roughly $80 million per year for the three ITIs combined to fund R&D programs. "We are, in effect, benevolent venture capital funds," she says, helping to create programs to fund rather than just funding what already exists.

Trengove and colleague Neil Wilkie, a technology analyst, explain that ITI Life Sciences has developed a process called "foresighting" that has guided investments since the institute was established in 2003.

The ITIs, says Trengove, aim to fund R&D programs that have a clear commercial outcome. "We look at what the market wants, how research can produce it, and how we can then put together an R&D program that will give that result," she says.

An in-depth report will look at all competing technologies and research expertise both in companies and academia. "We'll say, 'This is what we think is the state of play, and this is how we want to get involved.' Then we would go out and make the further contacts, speaking to global players in the area," Wilkie says, funding research or even licensing technology, if needed, to shape a detailed science plan.

ITI Life Sciences pulls together a variety of information to provide prospective start-up companies: patents obtained from research it has funded, for example, as well as expertise in exploiting those patents and know-how in applying the relevant technology. The result is a body of intellectual property that ITI Life Sciences has developed and owns.

According to Wilkie, participants in the ITI program then "license the intellectual property from us and take it to market. We try to develop technology that can be leveraged over multiple platforms." Medical innovations, for example, could be developed for human health, animal health, and biodefense.

The technology developer, Trengove says, "could be a start-up or an existing company. We want to secure as much of the vehicle to market as possible for Scottish ventures. Ultimately the research funding comes from the Scottish government; they see it as economic development."

Moreover, Wilkie adds, "we operate on very much a market economy investor principle. This investment is not a government grant," he emphasizes. "The background of the people on our team is very much private investment."

To date, ITI Life Sciences has put together market analysis reports on seven areas of potential investment: nanomedicine, molecular imaging, therapeutic and diagnostic antibodies, biofuels, cell-based screening, biomarkers, and stem cell research. The reports are available only to ITI members, who pay a subscription to join.

"More and more people are coming to talk to us, and more are from outside Scotland," Trengove says. "Companies appreciate that this is a serious organization that is keen to have solutions that work well. We are based in Scotland, but we are developing programs with potentially global reach."

Trengrove and Wilkie acknowledge that ITI takes a very hands-on approach to encouraging investment in Scotland. "We define where we want to go−we define the pot of gold," Wilkie says. "Then we let our partners work out how to get over the rainbow."