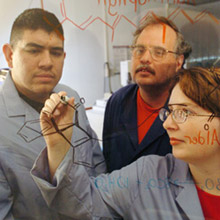 Credit: JEFF JANKO
Billiot (center) and two students work on methods for separating pharmaceuticals according to their structural "handedness."

The White House has announced the recipients of the 2005 Presidential Early Career Awards for Scientists & Engineers, one of the most prestigious awards to honor investigators in the early stages of promising research and education careers.

The award is the highest honor bestowed by the U.S. government on scientists and engineers who are beginning independent careers.

Fifty-six researchers were honored on July 26 in a ceremony presided over by John H. Marburger III, science adviser to the President and director of the White House Office of Science & Technology Policy.

Each presidential award winner receives a citation, a plaque, and a commitment for continued funding of their work from their agency for five years. Recipients of the 2005 awards include engineers, computer and informational scientists, and educators and researchers in the mathematical, physical, and biological sciences. Two of them are chemists.

Anna K. Mapp, an assistant professor of chemistry and medicinal chemistry at the University of Michigan, was recognized for her work in using the tools of synthetic organic chemistry to create synthetic building blocks that, when linked into hierarchical structures, adopt some of the forms and functions of proteins.

Mapp's research aims to develop new kinds of molecules that can be used to probe the workings of cells and cellular systems. In addition to her laboratory research, Mapp is exploring new ways to bring greater diversity into the sciences.

Eugene J. Billiot, assistant professor of analytical and environmental chemistry at Texas A&M University, Corpus Christi, was recognized for his work in developing methods to separate pharmaceuticals according to their structural "handedness."

Left-handed and right-handed versions of the same molecules often display vastly different biological activity and are difficult to separate, because of the similarity of their physical properties.

Billiot is also engaged in a number of educational activities, from mentoring young faculty to encouraging members of underrepresented groups to pursue careers in the sciences.

Nine federal departments and agencies annually nominate researchers whose work shows exceptional promise. The awards, established in 1996, honor young scientists and engineers for their early research accomplishments and educational contributions and highlight the importance of science and technology for the nation's future.

A complete list of the recipients of the 2005 Presidential Early Career Awards for Scientists & Engineers, along with their nominating federal department or agency, is available at www.ostp.gov.