Biorefinery Gets Ready To Deliver The Goods 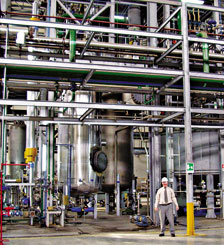 It's widely anticipated that within a few decades the world's crude oil and natural gas supplies will no longer be sufficient to meet global needs for transportation, energy, and chemical products. One primary solution is the development of biorefineries—facilities that use chemical or biological processes to convert sugars, starch, or cellulose from dedicated crops, agricultural residues, or municipal waste into basic chemicals that in turn can be refined to make fuels, plastics, agricultural chemicals, and more.

The Department of Energy, as part of its Biomass Program in the Energy Efficiency & Renewable Energy Office, completed a project two years ago that identified 12 building-block chemicals as targets for biorefineries (C&EN, May 31, 2004, page 31). The first commercial-scale biomass-based plant to produce one of these chemicals, levulinic acid, has been built in Caserta, Italy, by Le Calorie, a subsidiary of Italian construction firm Immobilgi. The 3,000-ton-per-year plant, part of an ecological industrial park, is being tested and is expected to go into full production in the next few months.

The Biofine process uses dilute sulfuric acid at 220 oC to hydrolyze cellulose from essentially any plant source into sugars, which are further transformed to levulinic acid, Fitzpatrick explains. Key to the process, which takes only about 20 minutes, is a two-stage reactor design that favors formation of levulinic acid over a series of other possible products.

Levulinic acid can be produced in yields of up to 70%, or about 0.5 kg per kg of cellulose, along with formic acid and furfural as valuable by-products, Fitzpatrick says. Lignin from the starting material is another by-product and is degraded to a carbon-rich char during the process. The material can be burned or gasified to generate electricity to help run the plant. Biofine received a 1999 Presidential Green Chemistry Challenge Award for developing the technology and demonstrating it in a pilot plant.

Used for years in food, fragrance, and specialty chemical applications, levulinic acid is a precursor for methyltetrahydrofuran, γ-valerolactone, and ethyl levulinate, which can all be blended with diesel or gasoline to create cleaner-burning fuels, Fitzpatrick says. Another derivative, diphenolic acid, is a potential replacement for suspected endocrine disrupter bisphenol A in the production of polycarbonate resins. Diphenolic acid is particularly interesting because it allows formation of graft copolymers rather than the usual linear polycarbonates, Fitzpatrick adds. Yet another valuable derivative is 5-aminolevulinic acid, a high-volume biodegradable herbicide.

"Levulinic acid is nontoxic, and the bifunctionality of the keto and carboxylic acid groups allows for all kinds of fascinating new chemistry," notes Leo E. Manzer, who recently visited the Le Calorie facility. Manzer retired from DuPont last year and is now president of consulting firm Catalytic Insights, Wilmington, Del. At DuPont, he spent several years studying the conversion of levulinic acid to various derivatives.

Manzer is particularly interested in developing pyrrolidones, which are used as solvents, surfactants, agricultural intermediates, ionic liquids, and nylon intermediates. This family of heterocyclic compounds can be made by catalytic reaction of levulinic acid or its esters with low-cost sources of nitrogen such as amines or nitriles, he notes.

Biomass-based feedstocks will become more important, Manzer believes, as companies like DuPont continue to seek new ways to improve efficiencies and keep down costs. For example, DuPont has a goal to derive 25% of its revenues from nondepletable resources by 2010.

In identifying their top 12 biorefinery chemicals, DOE scientists started with a list of more than 300 potential compounds. They narrowed the list down through an iterative process that considered the compounds' compatibility with existing petrochemical processing, technical complexity of the syntheses from biomass, known market potential, and other factors. The 12 molecules have three to six carbon atoms and multiple functional groups as well as high potential to be converted to new families of compounds.

Unofficially, glycerol was the first of the top 12 chemicals to achieve commercial development as a biomass-derived feedstock to make propylene glycol and other products. But glycerol is a by-product of the esterification of triglycerides in vegetable oil to make methyl esters, the principal components of biodiesel, and it isn't made directly from biomass on a commercial scale (C&EN, July 10, page 24). Besides levulinic acid and glycerol, the other DOE compounds are 1,4-diacids (succinic, fumaric, and malic), 2,5-furandicarboxylic acid, 3-hydroxypropionic acid, aspartic acid, glucaric acid, glutamic acid, itaconic acid, 3-hydroxybutyrolactone, sorbitol, and xylitol/arabinitol.

The Le Calorie plant is evidence that developing biorefineries is "not just a pipe dream," Manzer says.

"We truly can refine biomass to create fuels and value-added chemicals," Fitzpatrick adds.