Green Glow
[+]Enlarge
Credit: Bethany Halford/C&EN
By spraying a Cu(I) solution into a flame, James H. Maynard, a lecture demonstrator from the University of Wisconsin, Madison, gives a fiery demonstration of flame emission. 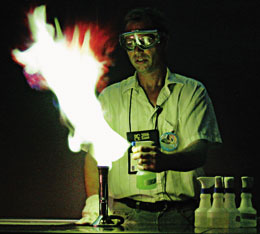 Credit: Bethany Halford/C&EN
By spraying a Cu(I) solution into a flame, James H. Maynard, a lecture demonstrator from the University of Wisconsin, Madison, gives a fiery demonstration of flame emission.

Last month's midsummer heat wave rolled into Indiana just in time to greet the attendees of the 19th Biennial Conference on Chemical Education (BCCE) with a blast of hot, humid air. But the dog's breath heat didn't seem to faze the 1,100 or so chemical educators who'd traveled to the event, the largest gathering of chemical educators in the world, held at Purdue University on July 29-Aug. 3.

Of course, with the meeting's full schedule of talks, workshops, and demonstrations, most conferees were too busy hurrying between air-conditioned meeting rooms and laboratories to take any notice of the weather.

"I would like to clone myself so that I could be not only in one session but 10 at the same time," remarked American Chemical Society President E. Ann Nalley. It's a sentiment that's frequently shared among attendees of BCCE, which has been sponsored by the ACS Division of Chemical Education since 1970. This year's meeting was no different, as participants could choose from more than 850 presentations touching on myriad aspects of chemical education for students of all ages.

One of the meeting's central themes was communication. It's no surprise that to teach effectively, educators need to be good communicators. But several BCCE speakers argued that those skills shouldn't be confined to the classroom.

Dressed in a bubble-gum-pink Sergeant-Pepper-style top, complete with brocade epaulets, Bunce had the audience sing along to karaoke versions of the Beatles' songs "Help" and "We Can Work It Out." She used the songs to emphasize the disconnect between chemical education researchers and chemistry researchers and to urge them to work together.

Communicating chemistry to the public was another popular topic among speakers at BCCE. Peter Atkins, a textbook author and University of Oxford chemistry professor, stated that there is "a single, central difficulty" that underlies the challenge of engaging the public with chemistry: abstraction.

Every day, chemists grapple with abstract concepts such as atoms, molecules, and the flow of energy and electrons. "Our single, central problem is to try to overcome that abstraction," he said.

Modern computer graphics, Atkins posited, offer an ideal way to help the public grasp chemistry's abstract concepts and to show the public how chemists think. As the artist behind the graphics in his popular physical chemistry textbooks, Atkins has used this visual approach to education for years.

"There is really nothing we cannot talk about graphically. You don't need symbols; you just need images to show the way the world is working," Atkins explained as he showed the audience colorful, space-filling molecular structures of several chemical compounds. "Once you put images like this up, you engage people."

Understanding chemistry can enhance the public's appreciation of the world around them, Atkins said, offering an analogous example with music. A person can certainly enjoy a piece of music without knowing any musical theory, he explained, but understanding the theory behind the music can give the listener a deeper appreciation of the piece.

"We're all in the business of deepening people's delight," Atkins concluded. By utilizing modern graphics technology, chemists can "make people enjoy the world more deeply than before we started to teach them."

As BCCE is an education meeting, several speakers addressed communication with students. Stanford University chemistry professor Richard N. Zare spoke about firing up students' imaginations through problem solving. "What educators really are about is inspiring students," Zare said. "No one has ever been inspired to anything by taking a great exam."

Zare thinks students often misunderstand the goals of exams and homework problems. "Students usually act like the solution is more important than the process of finding the solution." It's important, he said, for students to be willing to make false starts and mistakes because students learn by solving problems, not just by reading about how to solve problems.

"Reading a book about playing the piano will never teach you how to play the piano," Zare continued. "Problem-solving skills can be developed. They can be learned."

If problem solving is the do-it-yourself way to learn chemistry, then chemical demonstrations are chemistry's answer to the old writer's adage: Show, don't tell. "Teaching is easier with pretty experiements," remarked plenary demonstrator—and fire-eater—Viktor K. Obendrauf, a chemist from Austria's University of Graz.

Methane Mamba
[+]Enlarge
Credit: Bethany Halford/C&EN
Robert Becker, a chemistry teacher at Kirkwood High School in Missouri, looks on while methane bubbles through a soapy solution. The snakelike column of bubbles grew to about 4 feet before it broke off and Becker set it on fire. 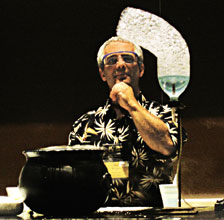 Credit: Bethany Halford/C&EN
Robert Becker, a chemistry teacher at Kirkwood High School in Missouri, looks on while methane bubbles through a soapy solution. The snakelike column of bubbles grew to about 4 feet before it broke off and Becker set it on fire.

Obendrauf was one of 26 educators who gave chemical demonstrations at BCCE. These chemical exhibitions illustrated a wide variety of chemical concepts with engaging, student-friendly experiments, including a voice-activated reaction, a spectroscopic look at the trans fats in sandwich cookies, and several flashy displays of colored fire, underwater flares, and methane-filled bubbles.

While the demonstrations were undoubtedly fun, there was plenty of substance behind the glitz, according to BCCE general chair and Purdue chemistry professor Bill R. Robinson. "We specifically wanted demonstrations presented in a way that they could be used in a classroom," he said. To that end, detailed teaching and how-to information about most of the demos will be available on the BCCE website for the next few months.

To help educators get a more hands-on sense of how to do demonstrations in their own classrooms, BCCE offered several demonstration workshops. Many of these were designed with cost and safety in mind so that they could be used in high school chemistry classes, where tight budgets and insurance guidelines have forced instructors to cut back on chemistry experiments.

Robinson said that meeting organizers wanted a strong program at BCCE for high school teachers, who accounted for about 15% of the attendees. Along with the demonstration workshops, offerings specifically for high school educators included symposia on the Advanced Placement chemistry exam's new format and survival skills for new chemistry teachers.

One of the most popular offerings in the smorgasbord of food for thought for BCCE attendees was a series of workshops and talks on the chemistry of food. As a rule, chemistry students don't get to taste their experiments. Food chemistry is the exception, allowing students to experience chemical concepts with all five senses. It's also a safe and inexpensive way to engage high school students, according to Sally B. Mitchell, a high school chemistry teacher at New York's East Syracuse-Minoa High School.

Mitchell has been teaching chemistry through food science since 1984. It's an idea her colleagues used to scoff at, until they saw how much chemistry her students were learning and retaining. Now Mitchell's Kool-Aid lab, which uses solutions of the popular powdered drink to explain concepts like concentration, molarity, and molality, is used by teachers throughout Syracuse.

The lab has become so popular, Mitchell said, that when she goes to the grocery store to buy the dozens of boxes of Kool-Aid she needs, the young check-out clerks will usually ask her if she's a chemistry teacher. Mitchell said when that happens she quizzes the clerks, and they usually still remember the concepts from the lab.

Mitchell's students cook peanut brittle and fudge while they discuss sugar chemistry and structural isomerism in carbohydrates. They also learn about fermentation, gluten polymerization, and gas laws by baking bread.

"Cooking is a fabulous vehicle for teaching chemistry," said plenary speaker Shirley O. Corriher. A chef, food scientist, and cookbook author, Corriher once famously deep-fried an audience member's wristwatch on live television. She spoke about her own evolution from chemist to cook to renowned food scientist, throwing in tips for cooking perfect eggs and pie crusts.

"Chemistry can take you anywhere you want to go," exclaimed Corriher, who has rubbed elbows with actor George Clooney and rapper Snoop Dogg. She fields calls from world-renowned chefs when their biscotti won't set or when the rice in their paella won't cook through. Julia Child turned to her to find out why sautéing baby spinach leaves turned the veggies bitter.

BCCE itself was not without its bittersweet moments. A memorial symposium in honor of Babu George left attendees and speakers in tears as they shared their recollections of the popular chemistry professor, who taught at Sacred Heart University in Fairfield, Conn. One speaker recalled how George once commissioned an ice sculpture of the periodic table for an outdoor picnic in 100 degree weather. Others did some of his favorite chemical demonstrations.

George, who passed away in 2004, was the 19th BCCE's original general chair, a role his colleagues said he was passionate about. "This meeting is Babu's meeting," said A. Mickey Sarquis, a chemistry professor at Ohio's Miami University and BCCE program cochair.

Chemical educators are now looking forward to the 20th BCCE at Indiana University, in 2008.

A Day at Camp Invention

ACS News
Mole Storytelling Jam debuts at chemical education conference﻿﻿
Education
Crystallography in the classroom
Safety
James T. Grady-James H. Stack Award For Interpreting Chemistry For The Public
Share X
To send an e-mail to multiple recipients, separate e-mail addresses with a comma, semicolon, or both.
Title: Burning Issues In Chemical Education
Author: Bethany Halford
Chemical & Engineering News will not share your email address with any other person or company.