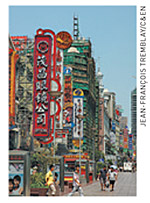 At C&EN, we define the chemical enterprise broadly because we believe that our readers are interested in a broad perspective on how that enterprise is performing, evolving, and interacting with society at large. This week's issue illustrates well the breadth of news, events, and trends around the world that have a chemical component to them.

In the cover story, C&EN Senior Correspondent Jean-Fran??ois Tremblay examines the rapid expansion of chemical and pharmaceutical R&D facilities in Shanghai. "What was a fad is now a craze," Tremblay writes, as one major company after another establishes or expands its research capabilities in Shanghai. The trend has led to a shortage of qualified chemists in the area and an upward surge in salaries and the cost of living, so much so that, Tremblay notes, some firms are looking to other areas of China to establish R&D labs.

The three stories in C&EN's Business Department analyze second-quarter sales and earnings for chemical, pharmaceutical, and biotech companies that C&EN tracks. Although chemical earnings were only 0.4% higher than in the year-earlier quarter, the picture was complicated by Dow Chemical's poor performance. Without Dow, the other 23 companies C&EN tracks had a 9.7% increase in earnings. Chemical industry performance in recent quarters is a welcome change from several years in the doldrums in the early 2000s. Pharmaceutical and biotech earnings surged 16.3% and 27.9%, respectively, in the second quarter.

There are too many stories in the issue to touch even briefly on all of them, but several are noteworthy. In the lead Government & Policy Department story, Senior Correspondent Lois R. Ember profiles New York Rep. Sherwood L. Boehlert, who is retiring at the end of this term after 24 years in Congress. Throughout his tenure, he has served on what is now the Science Committee, the last six as chairman. Boehlert is a strong champion of science and technology and a committed environmentalist who has fostered bipartisan cooperation on his committee. He'll be missed.

The Government & Policy Insights by Senior Editor Bette Hileman examines the shifting position of some environmental activists on nuclear power. While most environmentalists traditionally have been staunchly opposed to all things nuclear, many now see the threat of global warming to be so grave that they believe nuclear power to be a necessary component of efforts to cut CO2 emissions.

In addition to two fairly standard and quite interesting Science & Technology Department stories on a biorefinery and the discovery of a sulfation code in the carbohydrate chondroitin sulfate, this department contains two delightful and slightly offbeat stories. Senior Editor Ivan Amato writes on the propensity of nanoparticles of different dimensions to assemble into an array of quite beautiful patterns; the different materials may well also have useful properties. And C&EN summer intern Rebecca Evanhoe has written a highly informative "What's That Stuff?" on an unlikely topic, the common egg. You'll even learn why that greenish gray ring can form around the yolk of an overcooked hard-boiled egg.

In the Education Department, Associate Editor Bethany Halford transports you to the 19th Biennial Conference on Chemical Education, which was held at Purdue University July 29-Aug. 3. Halford captures well the enthusiasm of the 1,100 or so chemical educators who traveled to the event. One of the meeting's central themes, Halford writes, was communication, and she introduces you to several chemical educators who are masters at it.

The issue also contains the technical program for the 232nd ACS national meeting, which will be held in San Francisco, Sept. 10-14. More than 9,900 papers will be presented, making this the largest technical program in ACS history.

We believe that this breadth of coverage serves our readers well, and our annual reader survey supports that belief. In the 2006 survey, 95% of respondents said C&EN keeps them abreast of the chemical world, 92% that the magazine provides reliable coverage, and 91% that it keeps them informed about ACS. Those numbers have been pretty constant for the past decade.

Environment
C&EN Revisits 2002
Policy
Chemical & Engineering News Revisits 2001
Policy
Outlook For 2009
Share X
To send an e-mail to multiple recipients, separate e-mail addresses with a comma, semicolon, or both.
Title: The Chemical Enterprise
Author: Rudy Baum, Editor-in-chief
Chemical & Engineering News will not share your email address with any other person or company.