A Day At Camp Invention 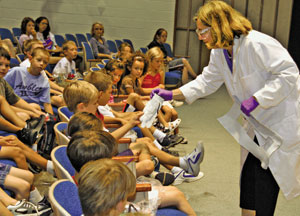 On a sweltering day in August, scientists at Rohm and Haas in Spring House, Pa., were busy inventing products and improving existing technologies. Just down the road, at Wissahickon High School, roughly 70 children entering first through sixth grades were using their imaginations to do the same thing.

Welcome to Camp Invention, a weeklong summer program that fosters creativity, teamwork, inventive thinking, and science literacy among elementary school children. Campgoers work on various projects through which they learn scientific concepts such as buoyancy, probability, and statistics. Wissahickon High School is just one of 850 sites in 47 states hosting the program this year.

Camp Invention began in 1990 as an education outreach program of the National Inventors Hall of Fame Foundation in Akron, Ohio, with support from the U.S. Patent & Trademark Office. The first camp in Akron was such a huge hit, and enthusiasm for the program spread so rapidly, that by 1995 the program was able to go nationwide. This summer, more than 52,000 children participated in Camp Invention, said Sherry Paprocki, communications coordinator for the National Inventors Hall of Fame Foundation.

On the third day of camp at Wissahickon High School, Catherine T. Hunt, ACS president-elect and leader of technology partnerships at Rohm and Haas, surprised the kids with a "magic show." Dressed in a long lab coat, safety goggles, and bright purple latex gloves, Hunt told the children about the chemists she knows and explained what these scientists do in their everyday jobs.

She recruited pint-sized volunteers from the audience to act as polymer chemists, paint chemists, and leather chemists, and together they examined the effect of superabsorbent polymers, paint thickeners, and chemicals for treating different types of leather. Oohs and aahs filled the room as the children got to see and touch the different products.

After the presentation, it was back to work for the students. They rotated through four modules in which they worked on various projects. For example, in the "I Can Invent" unit, the children took apart old or broken household appliances and reassembled them into an invention of their own. In "Fair Games," they used the concepts of equivalence, probability, and estimation to design carnival games. And in "Sea Worthy," they studied the concept of buoyancy by designing boats capable of collecting samples at the bottom of the ocean (a kiddie pool). 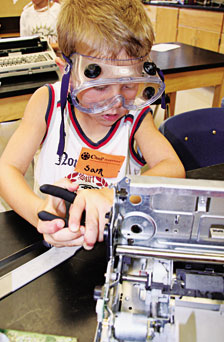 The Camp Invention program continues to grow. Next year, its national goal is to have 950 camps for 60,000 children. "Our hope is that we can have an impact on the number of scientists and inventors in the future," Paprocki said. She points out that they are still working to increase the number of girls who join the program. At Wissahickon High School, the ratio of boys to girls was roughly 5 to 2.

Hunt's participation in Camp Invention this year grew out of her interest and commitment to science education. When she was elected president-elect of ACS, Rohm and Haas gave her a $5,000 award, which she put toward scholarships for Camp Invention.

Hunt believes that exposure to the sciences needs to start at an early age. "They really are so impressionable right now," she said of the children. "That's why now is the time." Paprocki said preliminary research suggests that Camp Invention is leaving a lasting impression on participants, who later on continue in the sciences.

Hunt, who toured the camp after her presentation, noted that the children aren't afraid to be unique. "They have all these ideas and are able to generate them without restraint," she said, adding that there was a real can-do attitude.

Support for the program also continues to grow, and Paprocki said ACS members are welcome to volunteer as coordinators and teachers. Other ways to participate include giving a talk or a presentation at one of the camps or helping to fund scholarships for economically disadvantaged children to attend the program. This year, it cost $199 to send a child to Camp Invention.

Hunt said the role of an educator is to provide guidance and to let children realize their full potential. "It's about preparing the environment and letting them take the reins."

That's what Camp Invention is all about.

Career Tips
Zoomed out? Here’s how to manage expectations
Careers
Career Ladder: Joyce Nethery
Postdocs
Postdocs ponder missed opportunities caused by the coronavirus pandemic
Share X
To send an e-mail to multiple recipients, separate e-mail addresses with a comma, semicolon, or both.
Title: A Day At Camp Invention
Author: Linda Wang
Chemical & Engineering News will not share your email address with any other person or company.