Biohaus
[+]Enlarge
Bulges protruding from the surface of the cell-shaped building are meeting areas designed to resemble proteins embedded in a membrane (top). The interior features a garden with pools shaped like mitochondria (middle) and an atrium with bridges representing X and Y chromosomes (bottom).

Bulges protruding from the surface of the cell-shaped building are meeting areas designed to resemble proteins embedded in a membrane (top). The interior features a garden with pools shaped like mitochondria (middle) and an atrium with bridges representing X and Y chromosomes (bottom).

Architects sometimes turn to nature for inspiration, but their focus is generally on the macroscopic scale. The designers of a building that will house the new Institute for Nanobiomedical Technology & Membrane Biology in Chengdu, China, have turned instead to the microscopic scale: The building will incorporate many features inspired by cells. 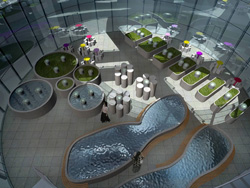 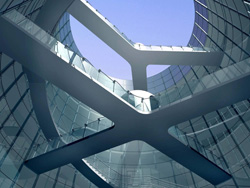 Meeting areas whose windowed exterior walls bulge from the surface of the cell-shaped building will represent proteins in a cell membrane. An interior garden will include pools shaped like mitochondria and other organelles. And the building will contain a crystal-shaped lecture hall whose ceiling lights will be arranged in the crystal diffraction pattern of a protein. Construction of the $12 million building, which will include many other cell-like attributes, will start in 2007 or 2008 and will likely be completed by 2009.

The design is the fruit of a collaboration between Shuguang Zhang, associate director of the Center for Biomedical Engineering at Massachusetts Institute of Technology; MIT graduates Sloan Kulper and Audrey Roy; and architects at Tsinghua University. Zhang is founding adviser for the Chinese institute, which will be based at Sichuan University, where he earned an undergraduate degree in biochemistry.

Kulper was majoring in architecture at MIT when he took Zhang's course on the molecular structure of biological materials, which highlighted the parallels between architecture and biological structures. After Zhang became involved in the Chinese project, he sent Kulper and Roy—at the time a computer science and electrical engineering major—to Beijing for three months to collaborate with the Tsinghua University architects. "We worked with images of proteins, membranes, and organelles alongside photos and textbook images of glazing systems and cantilevers," Kulper recalls.

"Nature has produced abundant magnificent, intricate, and fine molecular and cellular structures," Zhang says. "If they can be amplified billions of times, as in a building, then these structures can be seen, touched, and admired. At that large scale, they can also be very educational." He hopes that this "first molecular bio-architectural design" will stimulate the creation of other buildings based on biological structures.