A Periodic Table Of Nanoparticles

Restraint
[+]Enlarge
Credit: © Howard Davis/GreatBuildings.com
Tilings in the Alhambra, the famed 14th-century palace in Granada, Spain, are reminiscent of the superlattices into which some nanoparticles self-assemble. 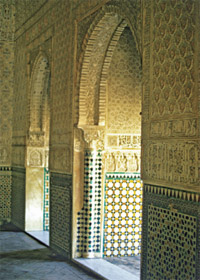 Credit: © Howard Davis/GreatBuildings.com
Tilings in the Alhambra, the famed 14th-century palace in Granada, Spain, are reminiscent of the superlattices into which some nanoparticles self-assemble.

Rest assured, the periodic table of elements' claim on front-and-center wall space in thousands of classrooms and laboratories around the world is safe. But some enthusiasts in the nanoscience arena liken the minuscule particles they are making—and mixing and matching like atoms—to the elements of a new periodic table: a periodic table of nanoparticles. Even if this nascent nanoparticle table contains only a smidgen of the explanatory and predictive power of the traditional table of elements, it could prove to be invaluable.

"When I look at all the structures these nanoparticles form, I think the nanoparticles must have some yet-to-be-discovered purpose," says Stephen O'Brien of Columbia University, a supervising member of one of the more prolific nanoparticle collaborations. The aim of his team's work, he says, is to identify and exploit the rules by which an enormous and growing variety of easily made nanoscale particles can self-assemble into structures with what he and his coworkers describe in one paper as "programmable physical and chemical properties" (Nature 2006, 439, 55).

"Our fundamental interest is to make as many new materials as we can," says O'Brien's colleague Elena V. Shevchenko of the Molecular Foundry at Lawrence Berkeley National Laboratory in California. "We are taking nanoparticles of different sizes and functionalities 'you know, like atoms' and mixing them together."

By mixing and matching pairs of semiconducting, metallic, and magnetic nanoparticles—with core diameters ranging from about 3 to 13 nm but of uniform size for any given type of nanoparticle-the researchers have made many versions of what they call "binary nanoparticle superlattices." Their theoretical analyses, modeling work, and experimental data indicate that the factors that determine exactly what binary superlattice will form include relatively long-range electrostatic forces between the nanoparticles, close-proximity effects such as dipole interactions and van der Waals forces, size effects, and the relative concentrations of the paired nanoparticle ingredients. The scientists have made superlattices with a range of nanoparticle stoichiometries—among them AB, AB2-6, and AB13—with tetragonal, cubic, hexagonal, and orthorhombic crystal symmetries.

The research remains fundamental. No practical new semiconductor, catalyst, or optical filter has come of it yet, but the simplicity of the process has made the researchers a bit giddy. "For me," Shevchenko says, "one of the most exciting results is that it is possible to make so many structures and that it is so easy."

To make the nanoparticles, the researchers use ultrasonication to dissolve a metal salt or other metal-containing ingredient in toluene or another nonpolar solvent. They also add a hydrocarbon coating agent important in the subsequent self-assembly process that forms the superlattices. After a few more precipitation-inducing agents have been added, the particles are harvested by centrifugation. The particles' size depends on the particular metal-containing ingredient used: Silver nitrate yields 4.2-nm-diameter silver nanoparticles, whereas silver chloride gives 3.4-nm-diameter particles. Gold, lead, iron oxide, lead selenide, lead sulfide, cobalt-platinum, and other nanoparticles can all be made with comparable ease.

Making the superlattices is even less complicated. In almost all cases, the researchers simply place a surface-typically a transparent silicon nitride chip or a silicon—based grid that can later double as the stage for transmission electron microscope (TEM) imaging—in a jar. They then add a colloidal solution bearing the two nanoparticles that they decided to pair up for self-assembly. When the solution is tilted at a drinking angle, placed inside a chamber at reduced pressure, and then gently heated, the organic solvent evaporates. What's left behind is a binary nanoparticle superlattice.

The most instantly compelling component of the papers the researchers have written about their work are the TEM images, including the scores of images in a 17-page chronicle of their research published earlier this year in the Journal of the American Chemical Society (2006, 128, 3620) and in Nature. These images, some of which are reproduced on these pages, reveal a plethora of patterned assemblies reminiscent of the geometric tessellations covering the walls and ceiling of the Alhambra in Spain and other Moorish buildings.

"The pictures are nice," notes Irving P. Herman, head of Columbia University's Materials Research Science & Engineering Center. "But they are nice because of the new synthetic control the researchers have. It will lead to whole new classes of materials."

Materials
Making bright colors out of thin air
Nanomaterials
A Faster Method For Making Metamaterials
Analytical Chemistry
Quantum Dots With Single-Atom Precision
Share X
To send an e-mail to multiple recipients, separate e-mail addresses with a comma, semicolon, or both.
Title: A Periodic Table Of Nanoparticles
Author: Ivan Amato
Chemical & Engineering News will not share your email address with any other person or company.