Yet Another Look at Science Education

Educators
[+]Enlarge
Credit: SUSAN MORRISSEY/C&EN
Lederman (left) and Malcom are leading the charge to develop an action plan to improve the STEM education system in the U.S. 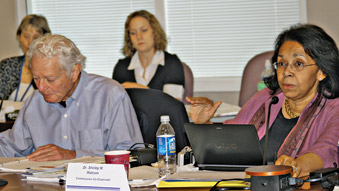 Credit: SUSAN MORRISSEY/C&EN
Lederman (left) and Malcom are leading the charge to develop an action plan to improve the STEM education system in the U.S.

Finding ways to improve science, technology, engineering, and mathematics (STEM) education in the U.S. has been the focus of dozens of reports over the past two decades. Although each report has yielded recommendations to bolster the U.S. education system, none has succeeded in sparking meaningful change.

Hoping not to follow this trend of informative yet low-impact reports is a newly established commission that is charged with developing an action plan to improve STEM education from kindergarten through college (K-16). The Commission on the 21st Century Education in Science, Technology, Engineering & Mathematics was appointed by the National Science Board (NSB), which is the governing board to the National Science Foundation and also advises the President and Congress on national science and engineering policies. It held its first meeting at NSF headquarters on Aug. 3 and 4.

The commission was established following a series of NSB hearings to solicit advice from various stakeholders on whether such a commission was needed and, if so, what issues it should address (C&EN, Dec. 12, 2005, page 10). Congress also voiced its support for the establishment of a commission to make recommendations to improve STEM education at all levels in the report language that accompanied fiscal 2006 appropriations legislation for NSF.

This commission is not the first time NSB has looked at ways to improve STEM education. More than 20 years ago, the board set up a panel with a similar charge. The report from that panel, the 1982-83 Board Commission on Pre-College Education in Mathematics, Science & Technology, was well-received, but it did little to enhance K-12 STEM education. Since then, many education reports have followed, which provided various recommendations but lacked action-heavy conclusions.

"Anything that needs to be said, has been said," explained Shirley Malcom at the meeting as she discussed the numerous reports published over the past 20 years. Malcom, head of the Directorate for Education & Human Resources Programs at the American Association for the Advancement of Science and cochair of the commission, said that, over time, deficiencies in STEM education have been addressed ?? la carte, a strategy that hasn't worked. Instead, she stated, any resulting report must be an action plan that addresses the problems holistically.

Malcom also stressed that there was no need to reinvent the wheel; what is needed instead is to take the ideas from previous reports, determine what works, and develop ways to implement necessary changes. An understanding of what works will help pare down the numerous ideas about improving education to a manageable set of recommendations that various stakeholder groups can get behind, she explained. In the end, "we must get everyone rowing in the same direction," she said.

To further increase support and ensure implementation of any resulting report, commission cochair Leon M. Lederman, resident scholar at the Illinois Mathematics & Science Academy, reminded the commission that part of their charge is to formulate recommendations that provide an "effective, realistic, affordable, and politically acceptable long-term approach" to solving the problems facing K-16 STEM education.

Led by Lederman, the commission members discussed ways to enhance the implementation of their resulting report. For example, Lederman noted that it is important to make sure the public is aware of the report and its message. To do that, he suggested that the group should try to get the support of popular public figures such as Oprah Winfrey. He also noted that, once the report is complete, the commission should continue to work together to monitor the implementation of the recommendations.

To help formulate an action-focused report, which the group expects to release next summer, seven working groups were set up. One was charged with studying ways to encourage and support effective teachers, while another was tasked with examining the types of environments and infrastructures that are needed to support education reform.

As the meeting concluded, Malcom reminded the commission members that the goal was not to produce another report to put on a bookshelf, but rather to deliver one that focuses on implementation. "The simpler the message, the more likely that it will be listened to," Malcom said.

Safety
Chemical Safety Board officials seek collaboration with ACS
Careers
Rethinking U.S. Science Education
Policy
National Commission On Forensic Science Is Launched
Share X
To send an e-mail to multiple recipients, separate e-mail addresses with a comma, semicolon, or both.
Title: Yet Another Look at Science Education
Author: Susan R. Morrissey
Chemical & Engineering News will not share your email address with any other person or company.