Freeing propylene oxide from its coproducts has been elusive, but new plants may finally make it work 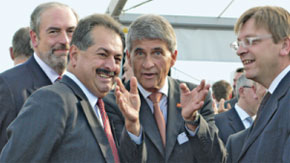 When Jürgen Hambrecht of BASF and Andrew N. Liveris of Dow Chemical, the heads of the world's two largest chemical companies, meet to break ground for a new chemical plant, it can be read as a strong statement of confidence that the plant's technology will work.

The two chairmen were on hand in Antwerp, Belgium, late last month to launch construction of a propylene oxide facility. A joint venture between Dow and BASF, it is one of two plants—Degussa is backing the other one—that may become the world's first to use hydrogen peroxide to make propylene oxide.

This technology, called HPPO, is meant to free propylene oxide from the creation of coproducts or from heavy integration with chlor-alkali production. At first glance, this liberation might seem like an easy task. For years, the chemical industry has been able to directly oxidize ethylene into ethylene oxide. But propylene has a greater propensity to burn than ethylene does, and direct-oxidation routes to propylene oxide have so far been elusive.

Thus the industry has relied on a series of reactions to make the polyurethane raw material. The oldest route, the chlorohydrin process, uses chlorine and propylene to produce propylene chlorohydrin as an intermediate. This process, experts say, is only cost-efficient if carried out in an integrated chlor-alkali complex.

Other processes use tert-butyl or ethylbenzene hydroperoxide to oxidize propylene, but these routes also yield tert-butyl alcohol (TBA) and styrene, respectively.

TBA is generally converted into methyl tert-butyl ether, a gasoline oxygenate that is being phased out in the U.S. Styrene, Hambrecht said at a press conference prior to the ceremony, also has problems. "Styrene is a glut on the market," he said. "That was one incentive to decouple the styrene from propylene oxide."

In addition to freeing propylene oxide from unwieldy coproducts, an HPPO plant will require less infrastructure and capital than a propylene oxide/styrene plant, Liveris explained. Dow and BASF, he said, will have "the flexibility to choose the best, most strategic locations for growth. We are not hamstrung by the requirements of the past." 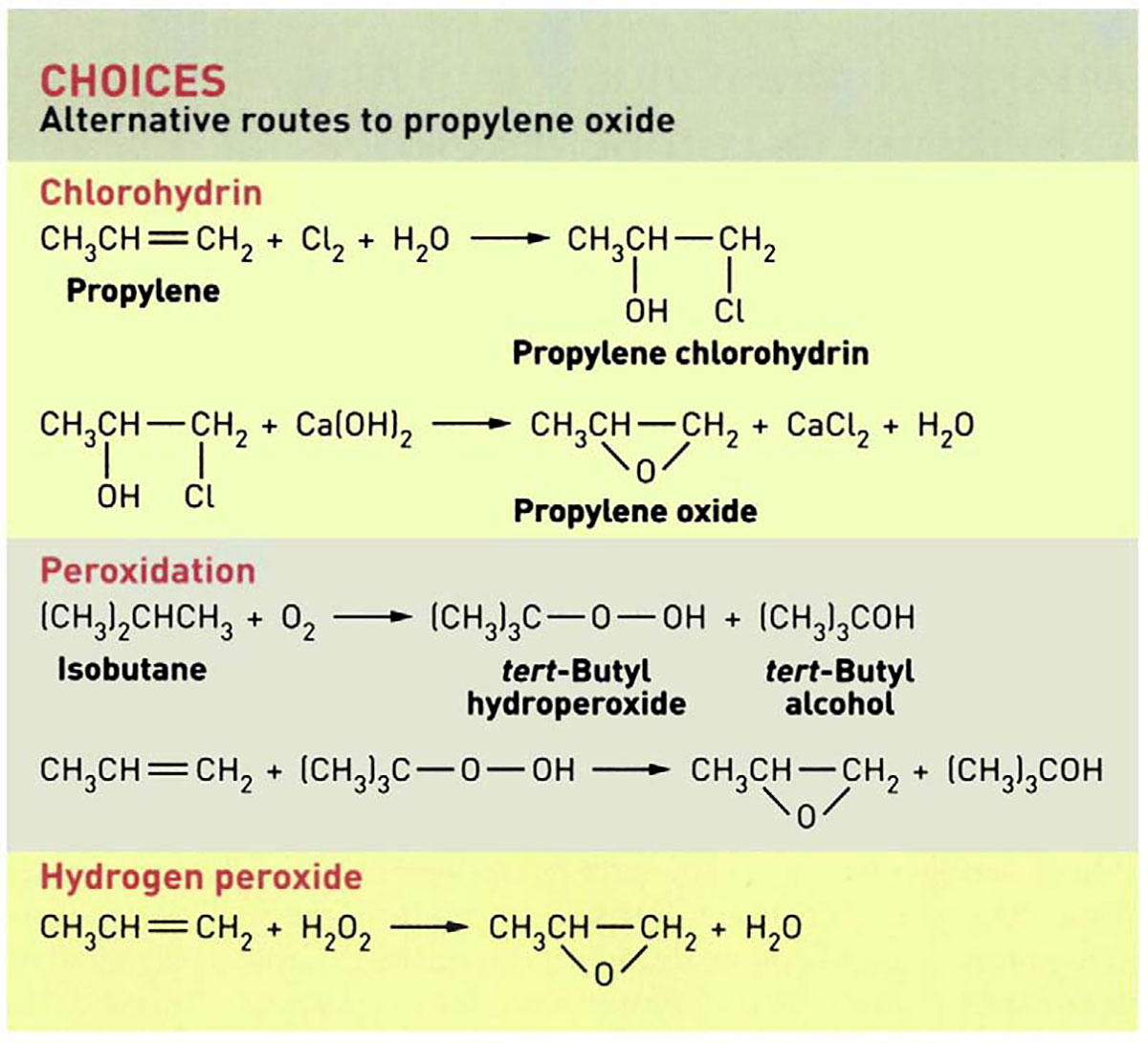 According to Jeffrey S. Plotkin, director of the process evaluation and research planning program at Nexant ChemSystems, about 7 million metric tons of propylene oxide capacity operates globally. About 43% is based on the chlorohydrin process, 36% on propylene oxide/styrene monomer (POSM), and 18% on propylene oxide/TBA.

The BASF/Dow joint venture will have 300,000 metric tons per year of propylene oxide capacity when it starts up in early 2008. A key to the HPPO process is having dedicated feedstock supply. Solvay is building an adjacent 230,000-metric-ton-per-year hydrogen peroxide plant that will be owned 50% by Solvay and 25% each by BASF and Dow. It features new technology that already has been worked into existing Solvay plants in Deer Park, Texas, and in Finland.

BASF and Dow started working together on the HPPO process in 2002, merging two ongoing R&D efforts. The Dow technology stemmed from its 2001 purchase of EniChem's polyurethanes business. BASF's dates back to 1995.

Earl Shipp, Dow's business director for propylene oxide and propylene glycol, said the collaboration moved the process forward. "When we got together to pool our research efforts to see if we could speed up the technology development, that was when things started to move pretty quickly," he said.

The companies are already considering building more HPPO plants, either alone or together. Dow would like to install capacity in Asia in the next five to six years, Shipp said.

BASF is mulling a HPPO plant at its site in Geismar, La., by 2009. "Right now, we are building the first, most exciting HPPO plant, but we have to run it first," Hambrecht said. "We will see and learn how to do it even better. Geismar might be bigger than here."

Implying Dow may again be a partner, Hambrecht added that a second 300,000-metric-ton-per-year plant "might be too big" for a single company. In 2001, Dow cancelled plans to build a POSM plant on the U.S. Gulf Coast.

The other major effort to bring peroxide-based propylene oxide technology to the market is being led by Degussa. In 2001, Degussa signed a development agreement with German engineering firm Uhde. Then in 2004, Degussa and South Jordan, Utah-based Headwaters formed the DegussaHeadwaters joint venture to develop a direct route to hydrogen peroxide.

The direct-oxidation technology is meant to lower the overall costs of making hydrogen peroxide, Abrams said. This process uses a Headwaters-developed nanocatalyst that reacts hydrogen and oxygen together directly, without the anthraquinones normally used. He said the catalyst works best with methanol as the solvent instead of water, a key difference from previous attempts at direct oxidation.

Abrams added that the concentration of the resulting hydrogen peroxide is much less than the 70% that is usually shipped commercially. But, he noted, dilution isn't an issue when the product is destined to be consumed in an adjacent propylene oxide plant.

In May, Degussa and Uhde signed a license for what they expect to be the first plant to use their technology. South Korea's SKC Chemicals intends to build a 100,000-metric-ton-per-year HPPO plant by the beginning of 2008 in Ulsan, South Korea.

That same month, DegussaHeadwaters purchased a hydrogen peroxide plant in Ulsan from Kemira to supply the new propylene oxide unit. The joint venture intends to double the capacity of the peroxide plant using traditional anthraquinone technology rather than the direct-oxidation technology.

At the BASF/Dow groundbreaking, Hambrecht was reluctant to criticize Degussa's process. "It is always difficult to compare our technology with competitors'," he said. "The one thing we know: The South Korean plant is only 100,000 metric tons per year. This, to our estimation, is not world-scale." Abrams stresses that the SKC project is focused on proving the viability of the propylene oxide technology.

Indeed, SKC wasn't the first company interested in the Degussa technology. In 2003, Sasol started to study a 60,000-metric-ton-per-year propylene oxide facility that would use the Degussa/Uhde technology and be accompanied by a Degussa hydrogen peroxide plant. The project has been canceled.

Meanwhile, Degussa doesn't plan on commercializing the direct synthesis hydrogen peroxide technology until 2007. Earlier this year, DegussaHeadwaters completed a demonstration plant in Hanau-Wolfgang, Germany. Abrams said commercialization of the technology will likely come in the form of signing another HPPO license, this time linked to a dedicated hydrogen peroxide plant. He expects such a deed in the next six months.

When it comes to coproduct-free routes to propylene oxide, HPPO isn't the only game in town. Sumitomo Chemical developed a variation of the peroxidation processes that circumvents production of TBA or styrene by recycling cumene. The company opened a plant in Japan in 2003.

The Japanese plant is owned by Sumitomo and the output is marketed by Nihon Oxirane, a joint venture between Sumitomo and Lyondell Chemical, the latter of which also has rights to the technology. Lyondell is working on what may be the holy grail of propylene oxide processes: the direct oxidation of propylene. Although little has been disclosed about the technology, Lyondell said its process produces propylene oxide from propylene, oxygen, and hydrogen in a single reactor.

Lyondell is operating a pilot plant in Newtown Square, Pa., and said it intends to commercialize the technology by 2010. The company said it believes its direct propylene oxide process "will offer a significant competitive advantage over all other coproduct and non-coproduct technologies."

Shell Chemical is working on a direct route to propylene oxide based on variations of the gold and silver catalysts it uses to make ethylene oxide. The company is also investigating a process using cumene hydroperoxide as an intermediate.

Although there is a lot of interest in non-coproduct routes to propylene oxide, the POSM process is far from deceased. "There are still places in the world where styrene and propylene oxide are needed," Plotkin said. "And it is cheaper to build a POSM plant than to build separate propylene oxide and styrene units. If you want to be in both, POSM might be the lowest cost way to get there." For example, Lyondell said POSM is a good option in places like the Asia-Pacific region where ethylene, benzene, and propylene are readily available at integrated chemical complexes.

Degussa's Abrams, on the other hand, sees new technologies dominating future plant construction. "We would expect that as much as 70% of the new capacity coming onstream in the next 10 years will be HPPO technology," he said. "Ours or Dow/BASF's."