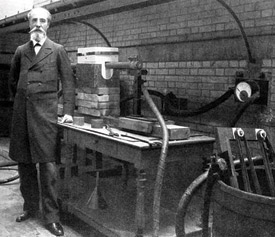 Talk about tough competition. According to a document prepared by the Swedish-French Association for Research, on Sept. 21, 1906, as the Nobel committee debated whom to recommend to the Royal Swedish Academy of Sciences for that year's Nobel Prize in Chemistry, the majority chose Dmitri Mendeleev. Mendeleev seemed a shoo-in: The then-septuagenarian Russian chemist had decades earlier pieced together the periodic table, the most powerful organizing principle for chemical phenomena ever uncovered.

Even so, Peter Klason, the academy's president, was able to convince the academy's chemical section to override the award committee's recommendation. He swung the vote to the soon-to-be-dead French chemist Henri Moissan with deft use of testimonials from giants in the field, letters from former winners of the chemistry prize, and careful analysis of the prize specifications in Alfred Nobel's will.

On Nov. 12, the academy bestowed the 1906 chemistry prize on Moissan, 54, "in recognition of the great services rendered by him in his investigation of the element fluorine, and for the adoption in the service of science of the electric furnace called after him."

Since the early 19th century, numerous chemical luminaries had tried and failed to isolate fluorine from its mineral compounds using electrolytic methods. Several chemists who had taken on this quest lost their lives or were gravely injured. Moissan, too, suffered severe poisoning episodes in his own efforts to isolate the most electronegative of elements.

It took many failures and redesigns of his electrolytic apparatus, but on June 28, 1886, while passing a powerful electric current through a solution of hydrogen fluoride in a molten potassium fluoride electrolyte, Moissan noticed a green-yellow gas forming at the anode. More important, he was able to isolate this fluorine gas in a way that allowed for its subsequent collection, observation, and use in experiments.

For the next four years, he and his coworkers at the University of Paris investigated the chemical behavior of fluorine. In a description of Moissan's work offered at the 1906 awards ceremony, Klason summed up what chemists had learned about fluorine and described that element as "the most savage of all." Moissan, he said, had opened the previously locked pathway to fluorine chemistry.

Today "there are at least 600,000 compounds that contain at least one atom of fluorine," says Alain Tressaud, head of the fluorine group at the Institute of Condensed Matter Chemistry at the University of Bordeaux 1 (Angew. Chem. Int. Ed., 2006, 45, 6792). These compounds, among them chlorofluorocarbons, pharmaceuticals, and tetrafluoroethylene, the monomer used to make Dupont's Teflon, reflect the power and versatility of fluorine.

Moissan's accomplishments, however, reached far beyond fluorine chemistry. When more capacious supplies of electricity became available to him around the turn of the century, Moissan ramped up his electrochemical pursuits by designing and building electric arc furnaces that ushered the field of high-temperature chemistry from the then-top temperature of 1,600 °C to more than 3,000 °C. His claims to have synthesized small diamonds using melts of iron and carbon-bearing ingredients such as sugar proved more visionary than practical. But the temperatures he could attain with his furnace opened the way to eking metal from ores that previously had proven too refractory. This achievement made possible the preparation of a large number of new metal carbides, including silcon and tungsten carbides, tough tool materials that would have enormous technological consequences in manufacturing.

"With the technological breakthrough brought by the electrical furnace, Moissan turned over a new page in the history of chemistry, that of high-temperature chemistry," Tressaud notes.

On Feb. 20, 1907, two months after receiving his Nobel award, Moissan was stricken with appendicitis and died. Historians speculate that repeated exposure to fluorine and carbon monoxide from his furnaces contributed to his death. Mendeleev died 18 days earlier.

People
Giants of chemistry
Women In Science
These female scientists should have won the Nobel
Obituaries
George Olah dies at age 89
Share X
To send an e-mail to multiple recipients, separate e-mail addresses with a comma, semicolon, or both.
Title: 1906 Chemistry Nobelist Henri Moissan Spawned The Vast Arena Of Fluorine Chemistry
Author: Ivan Amato
Chemical & Engineering News will not share your email address with any other person or company.