Linking Together The Origins Of Life

A peek at ancient catalysis has been delivered to modern eyes through the X-ray structure of an RNA-based catalyst.

This is the first atomic-level structure of an RNA-based enzyme, or ribozyme, that can join together, or ligate, two pieces of RNA. This reaction is essential for building RNA, for self-replication, and consequently for the origins of life (Science 2007, 315, 1549).

The work is of "fundamental importance," comments Gerald F. Joyce, a chemist at Scripps Research Institute. "This structure provides a glimpse of the chemical reaction at the heart of ancient RNA-based life."

In modern times, "DNA codes for genetic information while proteins get to do all the fun stuff," explains William G. Scott of the University of California, Santa Cruz, who, with postdoc Michael P. Robertson, examined the RNA-based catalyst.

The knowledge that DNA and proteins now play separate but interconnected roles has led to a molecular chicken-and-egg conundrum: Which came first, DNA or protein? Although DNA may provide a more durable means for storing genetic information, and proteins are more efficient catalysts, RNA can perform both of these tasks.

Important vestiges of this model are evident today; for example, proteins are assembled by an RNA catalyst known as the ribosome. But researchers have yet to observe ribozymes that can catalyze their own replication, an essential skill for propagating, and therefore persisting, in prebiotic times.

[+]Enlarge
Credit: © Science 2007
The X-ray crystal structure of an RNA-based ligase reveals a magnesium ion (purple) in the catalytic core at the center of three stems. 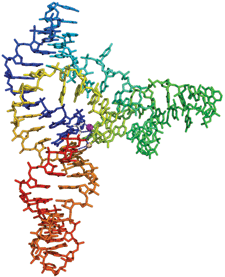 Credit: © Science 2007
The X-ray crystal structure of an RNA-based ligase reveals a magnesium ion (purple) in the catalytic core at the center of three stems.

Several groups, however, have evolved ribozymes in the laboratory that can catalyze the polymerization of nucleoside triphosphates-an essential first step in self-replication-as a proof of principle for the RNA world model. For example, David Bartel's group at MIT has a ribozyme capable of joining together 14 sequential RNA bases. But until now, no structure of any of these primordial mimics has been solved.

In fact, Robertson spent more than five years getting the atomic coordinates for this new ligase, which is a minimized version of a ribozyme he evolved as a graduate student at the University of Texas, Austin. The ligase joins its own 5′ and 3′ ends together to form a closed loop.

The 2.6-Å crystal structure "can reasonably be interpreted as the active form of the enzyme," Joyce comments, and reveals the closed-loop product of the self-ligation reaction.

The catalytic core appears to be located at the intersection of three RNA stems and requires an octahedrally coordinated magnesium atom as well as five precisely positioned nucleoside bases to do its job.

Catalysis involves two guanine-adenine base pairs, a rare but biologically relevant marriage known as a "sheared G-A pair," Robertson says. One of these guanines bears the 5′ triphosphate group that is attacked by the 3′ uridine nucleophile in the catalytic pocket. A tightly bound water molecule distracts the uridine's 2′ hydroxyl from competing as a nucleophile, thereby preventing the formation of a biologically irrelevant 2′-5′ linkage.

Because this ligase catalyzes a self-linking reaction, its action cannot lead to sequential addition of nucleoside bases in the kind of polymerization reaction required for complete replication. But the chemistry catalyzed in this ligase's active site is probably similar to the reaction mediated by more sophisticated ribozyme replicases, Joyce says. He points out that the structure of the active site shows that this ribozyme uses biochemical strategies that are well-known in naturally occurring protein enzymes and other ribozymes.

"Unlike the ancient RNA replicase enzymes that likely became extinct more than 3.5 billion years ago, these modern re-creations will be available for detailed investigation," says Joyce.

Biological Chemistry
Transcription activation complex analyzed in high-def
Biological Chemistry
Cross-chiral Ribozyme May Hold Clues To Origin Of Life
Biological Chemistry
New Class Of Ribozymes Found
Share X
To send an e-mail to multiple recipients, separate e-mail addresses with a comma, semicolon, or both.
Title: Linking Together The Origins Of Life
Author: Sarah Everts
Chemical & Engineering News will not share your email address with any other person or company.