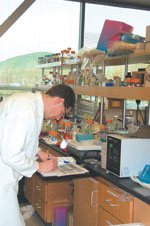 Continuing to diversify their portfolios beyond protein-based therapies, the two largest biotechnology companies each signed small-molecule drug development agreements last week. In a twist, the deals allow the firms to see more data before making a bigger commitment to the drugs.

Amgen linked up with Cytokinetics for the discovery and development of small-molecule drugs to treat heart failure. Cytokinetics will open its portfolio of activators of cardiac myosin, a protein found in heart muscle that converts energy into force, thereby enabling the heart to contract.

Amgen has the option to license CK-1827452, Cytokinetics' most advanced drug, and the companies will collaborate to identify other cardiac myosin activators as follow-up products. Amgen will fork over a $42 million up-front fee and pay $33 million for a 9% stake in the South San Francisco-based company. If Amgen decides to exercise its option to license CK-1827452, which has completed Phase I clinical trials, Cytokinetics will collect another $50 million.

Meanwhile, Genentech expanded its small-molecule drug pipeline through a pact with Exelixis. The big biotech firm will initially pay $40 million to take part in the early development of XL518, Exelixis' inhibitor of mitogen-activated protein kinase (MEK), which can trigger cell division and is implicated in certain types of cancer. The company has yet to identify the tumor types that the drug will be tested against.

Exelixis, which filed an Investigational New Drug Application for XL518 last month, will shoulder development of the compound through the end of Phase I. Genentech can then pay more to further develop it. In that case, the companies will split the profits from sales of the drug in the U.S. up to a certain threshold.

The deals are emblematic of an overall push by big biotech companies into small-molecule drug development (C&EN, Oct. 30, 2006, page 14). In addition to building up in-house chemistry research organizations, biotechs are looking outside to fill their drug pipelines. In the past year, Genentech signed small-molecule drug development deals with CGI Pharmaceuticals, Piramed, and Inotek, while Amgen inked pacts with Epix Pharmaceuticals and ProStrakan.