Heavy Industry
[+]Enlarge
Credit: Jean-François Tremblay/C&EN
Lonza's new drug ingredients plant in Guangzhou will be built in phases. The company is acquiring the land across the creek. 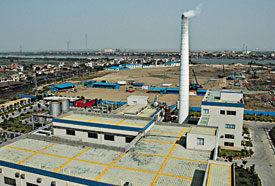 Credit: Jean-François Tremblay/C&EN
Lonza's new drug ingredients plant in Guangzhou will be built in phases. The company is acquiring the land across the creek.

As one approaches the site that Swiss fine chemicals and biopharmaceuticals maker Lonza selected for drug manufacturing in China, it's immediately obvious that a major undertaking is in progress. The area is large enough to dwarf construction cranes and trucks. One would guess that a large petrochemical plant is taking shape, not facilities to produce active pharmaceutical ingredients (APIs) by the kilogram or, at most, by the ton.

The site is in Nansha, an outlying district of Guangzhou, the largest city in southern China. It's an unusual location for a pharmaceutical plant. Most of China's drug industry is located in the Shanghai area, where companies can easily get raw materials and qualified manpower. Lonza's industrial neighbors in Nansha are making products such as petrochemicals and copper-clad laminates.

Announced in April and expected to cost $200 million to complete, the work now under way will result in a series of plants that produce APIs. Lukas Utiger, the company's senior vice president responsible for organic fine chemicals and performance chemicals, says the drug ingredients made at the site will be export-grade and supply major world markets.

Peter Saxon, a New Jersey-based consultant who visits China often to help local drug companies upgrade their production systems, says he knows of no other foreign company with a large API plant in the country. He believes that other foreign firms will wait and see how Lonza gets on before setting up their own plants.

Lonza did not start out in a big way in Guangzhou. The Lonza way, Utiger says, is to try things first on a small scale. The Nansha niacinamide plant is the company's second in Guangzhou. The other facility has been operating for 10 years in another part of the city. He says the smooth operation of the first plant and the progressive addition of other operations over the past decade made Lonza comfortable with the idea of adding advanced API facilities.

The stability of Lonza's workforce in Guangzhou was also a decisive factor, Utiger says. High staff turnover poses a risk to the safety of intellectual property and is a key concern of drug companies.

It is unusual for turnover to be low in China, but John Po, the head of Lonza's China operations, claims the company hardly loses any people. Lonza began hiring researchers in Guangzhou in 2004, and turnover among them, as in the manufacturing staff, has been minimal. "We lost one researcher, but that was because he went back to school," Po says.

The Nansha labs were expanded earlier this year and are now large enough for 60 scientists. The labs, administrative space, and niacinamide plant already cover 13 acres and employ 250 people. The API plants under construction will cover another 15 acres. By the time they open, the Nansha site will employ a workforce of 600 people.

The first API facility to come on-line will be a small-scale plant able to produce drug ingredients for clinical trials in batches of up to 100 kg; Utiger expects it will begin operations this year.

The first large-scale plant, producing volumes of up to 250 tons, will open in late 2008. The new facilities will not be dedicated to the production of specific APIs but will instead have the ability to produce many types of pharmaceutical ingredients. By the end of 2008, Nansha will be able to produce up to five different APIs per year, Utiger expects.

Lonza foresees further expansion in Nansha after 2008. Eventually, the site will be able to produce up to 20 APIs per year in large volumes. Lonza is optimistically in the process of acquiring another 50 acres of land on an adjacent site. Consisting today of ponds, fields, and a hamlet of about 50 houses, the new site will require extensive preparation work.

The Nansha site will not have such low-temperature capabilities initially, nor will it handle controlled substances such as narcotics. Although the new plant's initial focus will be on exports, Utiger says it may produce APIs to meet local demand as the Chinese market matures.