The Taste of C&EN

When the Feher family from Copley, Ohio, can't find their issue of C&EN, all fingers point to the FURRIEST MEMBER of the family, Geebers, the cat. "The cat absolutely loves C&EN," Frank Feher says. "It regularly expresses its affection by generating a soggy pile of shredded, half-eaten morsels from the cover."

According to Feher, no other magazine gets this treatment. The cat only snacks on the front and back covers, allowing his owners to read the pages in between. While Geebers has been feasting on C&EN for years, his love of the covers grew considerably after the Oct. 16, 2006, redesign.

"When I first saw the Oct. 16 edition of C&EN, I wondered whether anything other than the look had changed," Feher says. "Based upon our cat's behavior over the past couple of weeks, I now know the answer. In addition to bringing us a fresh new look to the magazine, the editorial staff obviously is bringing us a new taste. Our cat loves the C&EN cover more than ever, and it appears that the tastiest magazine in my house has become even tastier." 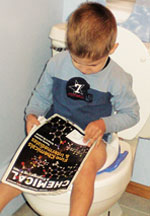 Credit: Laura A. Smith
Catching up on chemistry news.

What do you request when you're three years old and need a little LIGHT READING while going through some intense potty training? The June 5, 2006, issue of C&EN, of course. That's exactly what Jake Smith asked for earlier last year, providing his mother, Laura, with a perfect Kodak moment.

"Jake has an amazing attention span," says his father, Mike, an organic chemist at Bristol-Myers Squibb. "He knows more dinosaur names than I even knew existed. He runs biochemical experiments daily, especially the kind that have to do with sucrose interactions with his taste buds. We can't stop him from jumping on and off the furniture."

While showing interest in C&EN, Jake also reads National Geographic Kids and Fine Woodworking. So just how many issues of C&EN has Jake requested for bathroom reading? "Jake usually tends to his own business," his father says. "So we can only assume that he is keeping up with his periodicals."

Xerox, in conjunction with the Palo Alto Research Center, announced in late November that they have designed "ERASABLE PAPER"—a paper that erases the content of its pages within 16 to 24 hours of initial printing, or by immediately running the paper through the printer again. The paper can be reused as many as 50 times, saving countless trees and money on stationery costs.

According to the New York Times, the process works without toner, producing a low-resolution document in purple ink. Xerox won't reveal the exact nature of the technology but tells the Times that it's based on compounds that change color when exposed to a certain wavelength of light.

Xerox stated the idea came from research results on office paper. The company found that more than 40%—or two out of every five pages printed—were used once and then tossed, creating an enormous amount of unnecessary waste.

Xerox remains unsure if it will commercialize the technology but has applied for a number of patents covering the invention.

This week's column was written by Faith Hayden. Please send comments and suggestions to newscripts@acs.org.

Coatings
A hot take on rewritable paper
Profiles
The argument for using blockchain to secure scientific research
Policy
Readers Unhappy Over Polybags
Share X
To send an e-mail to multiple recipients, separate e-mail addresses with a comma, semicolon, or both.
Title: Newscripts
Author: Faith Hayden
Chemical & Engineering News will not share your email address with any other person or company.