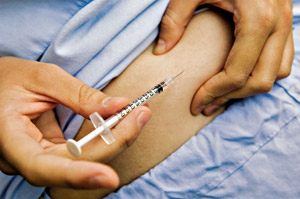 Credit: istockphoto
New drugs could help keep diabetes from progressing to the point where insulin injections are needed.

Obesity is creeping up the charts to become a leading preventable cause of death in the U.S. Expanding waistlines have been linked to a greater risk of high blood pressure, heart disease, stroke, and arthritis. But recent studies suggest it is the alarming rise in cases of type 2 diabetes that is most responsible for a higher death rate among the obese.

The American Diabetes Association (ADA) estimates that 20.8 million Americans, or about 7% of the nation's population, had diabetes in 2005. About 80% of these people are overweight. Despite the enormous patient population, treatment options are severely lacking.

Conventional type 2 diabetes drugs can be effective, at least for a period, in keeping glucose levels under control, but they are also associated with unpleasant side effects that often cause patients to fall off their regimen. Of the three most common classes of drugs, metformin and thiazolidinediones (TZDs) can cause substantial weight gain and gastrointestinal side effects, while sulfonylureas are linked to hypoglycemia.

But a new crop of type 2 diabetes drugs that act on the pathway of a gastrointestinal hormone called glucagen-like peptide 1 (GLP-1), appears to keep the disease in check without the off-putting side effects.

In April 2005, Amylin Pharmaceuticals introduced Byetta, a peptide-based treatment that is injected twice a day. Merck & Co. followed in October 2006 with Januvia, a small-molecule therapy taken orally twice daily, and Novartis hopes to launch Galvus, which acts on the same target as Januvia, early this year. The late-stage diabetes drug pipeline includes small molecules from Bristol-Myers Squibb and Takeda Pharmaceutical and a peptide from Novo Nordisk.

Type 2 diabetes, the most common form of the disease, occurs when the body starts losing its ability to respond to the insulin it produces. Because insulin is responsible for shuttling sugar to cells, glucose begins to accumulate in the bloodstream, depriving cells of much-needed energy and straining multiple organs. The disease can sometimes be controlled by diet and exercise, but many patients end up needing drugs to help lower the level of glucose in their blood.

And though the disease starts out as a failure to process insulin correctly, eventually the pancreas loses its ability to make insulin altogether. At this advanced stage, patients must start taking insulin shots, which can pose their own health risks. Long-term consequences of diabetes include heart disease, blindness, and kidney damage.

The new diabetes treatments were borne out of research conducted in the early 1990s, when scientists first showed that infusing diabetics with GLP-1 lowers blood glucose levels. However, GLP-1 made for a problematic therapy because as a peptide, it would have to be administered by infusion or subcutaneous injection, according to Nancy Thornberry, Merck's executive director for metabolic disorders. Further, the peptide rapidly degrades in the body, frustrating efforts to achieve a high enough concentration to control the disease. 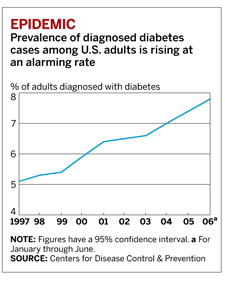 Those obstacles created a fork in the road for researchers. Amylin, a San Diego-based biotech firm, chose to stay the course with the GLP-1 target.

Amylin President Daniel M. Bradbury explains that company researchers attending an ADA meeting in 1996 were intrigued by a presentation from John Eng, a researcher at the Bronx Veterans Affairs Hospital in New York City. Eng had discovered that exendin-4, a peptide found in the saliva of Gila monsters, mimicked the action of GLP-1 but displayed a far longer half-life in the body.

Amylin licensed the peptide, now known as exenatide, and in 2002 partnered with Eli Lilly & Co. for its clinical development. Three years later, the companies got the Food & Drug Administration's nod to market the drug, on the basis of its ability to control blood glucose levels without causing weight gain, hypoglycemia, or other side effects. In fact, patients taking Byetta actually lose weight.

The drug was first approved as an add-on therapy for patients unable to achieve optimum glucose control on metformin or a sulfonylurea. Late last year, FDA said Byetta could be used in combination with TZDs, and Amylin continues to study the drug in other settings.

While Amylin worked on Byetta, another group of scientists approached the glucose problem by a different route. They began to study how GLP-1 is metabolized in the hope of finding new drug targets. Researchers at several companies, including Novartis, found that dipeptidyl peptidase IV (DDP-4), a protease, is responsible for breaking down GLP-1.

The studies opened the door for a new class of small-molecule drugs, DDP-4 inhibitors, that interrupt the GLP-1 pathway. Merck's Januvia, Novartis' Galvus, and the Bristol-Myers drug in development all fall into this category.

Like Byetta, the DDP-4 inhibitors lower blood glucose without the risk of hypoglycemia or edema. DDP-4 inhibitors provide good glucose-lowering without the liabilities of older drugs, Thornberry says. This means they can be used alone or be added to a patient's regimen to improve glucose control without adding side effects. "In a market like diabetes that's about combination control, this is an excellent agent for both first-line use and in combination with existing agents," she notes.

Januvia moved through development at breakneck speed; Merck started a DDP-4 inhibitor program in 1999 and was soon moving its lead compound, discovered by Ann Weber, the firm's executive director of medicinal chemistry, into the clinic. Merck filed a New Drug Application (NDA) with FDA after just six years, and the drug was approved last fall for use alone or in combination with metformin or TZDs. The company is currently developing a fixed-dose combination of Januvia and metformin, and it is conducting further studies of the drug in other type 2 diabetes patients.

Though Novartis conducted some of the groundbreaking research around DDP-4's role in diabetes, the company's own DDP-4 inhibitor program has lagged. Novartis submitted its NDA for Galvus in March, but FDA extended its review of the drug by three months after Novartis submitted additional data to support its application. The company now expects to receive approval sometime in the first half of this year.

Between the new treatments and the growing patient population, competition in the diabetes market is sure to be fierce. However, each company says the market is vast enough for everyone to have a fair share. "The biggest competitor we have is diabetes itself," Amylin's Bradbury says. "The reality is that diabetes is a very poorly treated chronic disease, and there's a huge opportunity for just about any new drug coming into the diabetes area."

Jim Reddoch, a stock analyst with Friedman Billings & Ramsey (FBR), likens the diabetes arena to the crowded osteoporosis market, in which many drugs have managed to pull in major sales.

Yet companies are certain to jockey for position. Initially, most industry observers believe, the DDP-4 inhibitors will address a different slice of the type 2 population than Byetta does. Because Byetta is injected rather than swallowed—a critical distinction for patients facing a lifetime of treatment—it is most likely to attract patients who have stopped responding to oral drugs and now face insulin injections. Though DDP-4 inhibitors are approved for use only in combination with traditional drugs, their oral availability could easily turn them into first-line therapies.

However, Byetta's trump card—its ability to produce weight loss—could help it edge into the territory of DDP-4 inhibitors. In a recent report on Byetta, Reddoch points out that most type 2 patients are obese. Though Januvia had a strong launch, "we continue to believe that the majority of DDP-4 use will be confined to the type 2 patients who are not obese, since DDP-4s have not demonstrated an ability to reduce weight in these patients," he writes in the report.

Furthermore, Amylin and its partner Lilly are attempting to make Byetta more palatable, and possibly more effective, by developing a once-weekly injectable version that uses technology developed by the drug delivery specialist Alkermes.

Preliminary studies have shown that the long-acting Byetta is almost twice as effective as the twice-daily version. Moreover, patients in the early-phase study lost nearly 10 lb after just 15 weeks of using the drug.

"Another advantage of getting continuous exposure is that you end up with lower adverse events," Bradbury says. The main complaint from patients taking the twice-daily form of Byetta is mild-to-moderate nausea associated with the peak concentrations of the drug around the time of the injection. The once-weekly formulation should eliminate those spikes, he says.

If it reaches the market, the long-acting Byetta could go up against the DDP-4 inhibitors, though there is also potential for the two drugs to be used in combination for optimum glucose control. FBR's Reddoch expects once-weekly Byetta to launch in the U.S. in 2009, thereby bringing sales from the Byetta franchise to $1.9 billion annually by 2011. That figure puts Byetta on essentially the same track as Januvia, which Merrill Lynch forecasts will rack up $1.6 billion in sales by 2010.

A major goal for all the companies with type 2 diabetes drugs is to show their therapies are effective in treating "prediabetic" patients. In prediabetes, a patient's blood sugar is higher than normal but not yet at a level considered diabetic. Treating prediabetes would be similar to taking a cholesterol-lowering drug to prevent heart disease—and could prove as lucrative for drug companies as the statin class of cholesterol agents has been.

Though FDA has yet to approve a drug for the prediabetes population, "everyone fully anticipates an approval eventually," Thornberry says, assuming long-term studies show a benefit. The drug would have to have a "very clean" safety and tolerability profile, she adds, noting that both the DDP-4 inhibitors and drugs similar to GLP-1 fit that bill.